This study presents the current lending environment for hotels. It consists of four topics, (1) lending parameters, (2) availability of debt by project and chain-scale segment, (3) loan characteristics, and (4) an outlook on lending criteria. 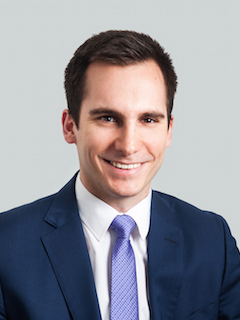 The headwinds from geopolitical insecurities have proven surmountable, providing an upswing in confidence among hotel lenders compared to one year ago, suggesting an even more positive momentum in availability of debt across all hotel projects and segment types, including new developments.

A continued ‘borrower’s market’ with historically low interest rates and compressed lending margins was seen in 2017.

The end of the prolonged era of cheap money in Europe is becoming apparent, yet investors and developers will most likely benefit from the current conditions in the coming 12 months.

Through our work with hotel investors and developers, we have seen abundant hotel financing for all project types across European markets in recent years. The combination of continued strong growth momentum in hotel values across Europe as well as historically low interest rates has resulted in an increase in hotel transaction volumes, with many investors seeking the use of all available debt.

This survey, conducted among hotel teams of leading European banks with maximum loan amounts ranging from €20 million to €600 million, consisted of four topics: (1) lending parameters, (2) availability of debt by project and chain-scale segment, (3) loan characteristics, and (4) an outlook on lending criteria. Figure 1 highlights the primary countries covered by the respondents of this survey. 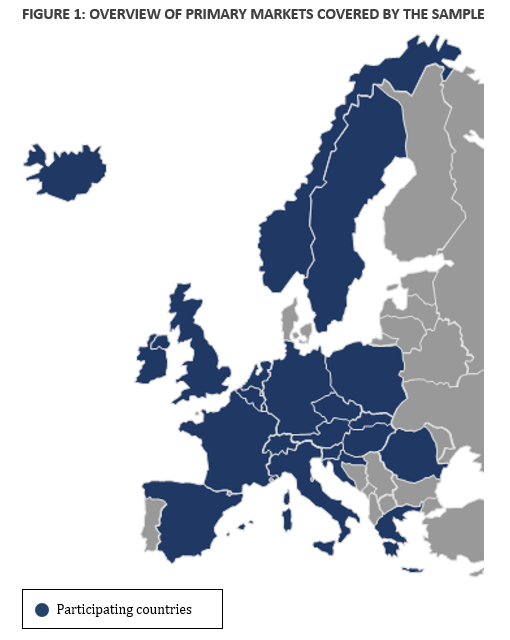 1.  Senior debt is abundant for all project types

Lenders have reported that debt for hotels is widely available across Europe. Our respondent banks are all willing to issue senior debt for existing property acquisitions, refinancing, renovations and expansions. Interestingly, hotel refinancing is most active in Central and Eastern Europe (CEE), with a number of loans only recently refinanced or settled.

While debt is available for all project types, the market for development financing is smaller than for investment financing, with not much more than 20% of loans being given to such projects. This attitude mirrors banks’ perception of the market being at a more mature phase in the cycle, resulting in more cautious lending for new developments and fears of possible oversupply, particularly in Western Europe.

With a view across various hotel lenders, it is still Western European banks that can issue the largest loan quantums. However, as the current investment cycle reaches its ninth year in 2018, the average loan size without syndication has started to decrease slightly in the most mature hotel markets.
Our respondents indicated that smaller regional banks continue to finance projects of similar sizes as before, but major international banks have slightly decreased the loan quantums they offer. While borrowers certainly benefit from a wide variety of options for small- and medium-sized projects, for loans above €250 million only the largest European hotel lenders are able to provide syndicated funding. 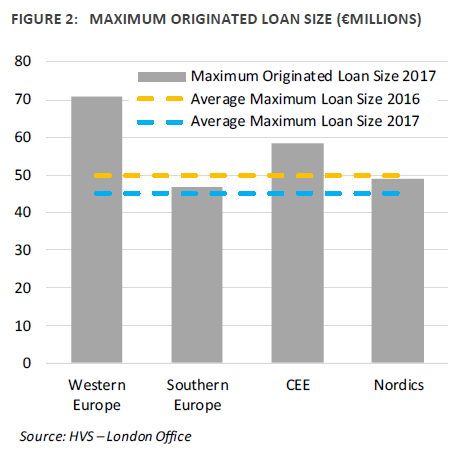 3.  Lenders continue to prefer full-service properties at the higher end of the chain-scale segment

Upscale and midscale hotels continue to be the most favoured type of hotels to receive loans, followed by the luxury segment. Economy properties have received the least amount of financing from our respondents. The exception to this rule is the Nordics, where lenders allocate an average of only 3% of their loans to luxury hotels and have a clear preference for midscale properties. 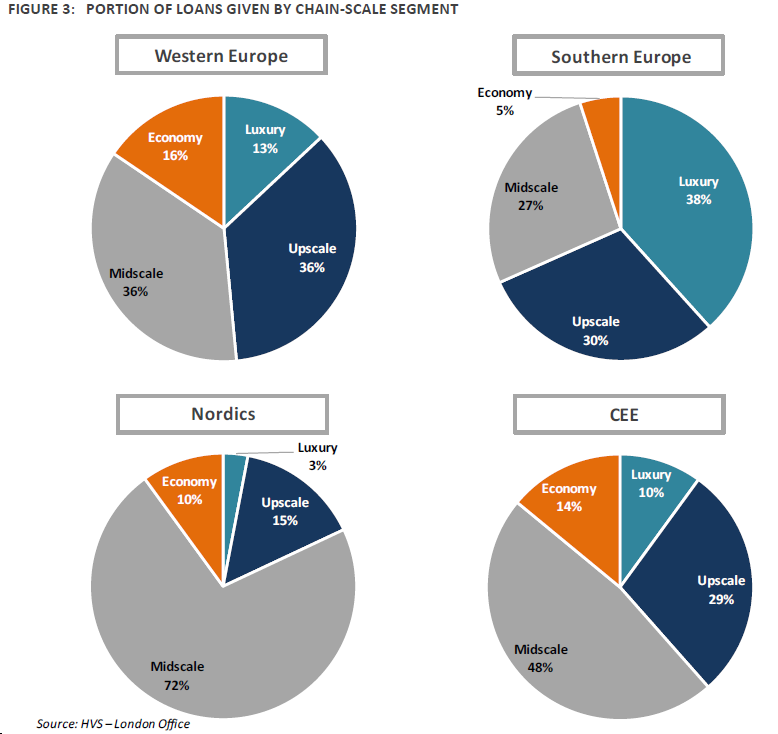 In line with improving hotel performance, all respondents indicated a loan to value (LTV) ratio at or above 50%, with lenders on average increasing their maximum acceptable LTV over the past 12 months by 2.3% to 59.8%. The regional differences shown in Figure 4 also reflect the perception of risk around the maturity of the cycle, as many banks consider Western Europe to be at a more mature phase in the cycle and are thus applying more conservative maximum LTVs. 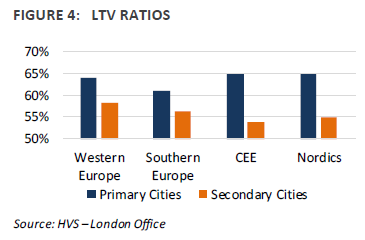 Debt service coverage (DSC) ratios range from 1.5 to 2.25 across all surveyed markets. While these figures might seem relatively high, it is important to keep in mind that banks are operating in a very low interest rate environment. These low financing costs along with compressed margins and long amortisation periods all act as factors that increase DSC ratios. It is likely that when interest rates increase in the future, DSC ratios will compress. 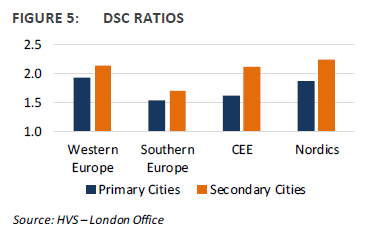 Fixed interest rates continue to be offered at historical lows, below 4% in all major markets. A slight decrease of 0.28%, likely due to increased competition among lenders, can be observed over the last 12 months for hotels with management agreements in Western Europe. Banks offer less favourable terms for secondary markets. 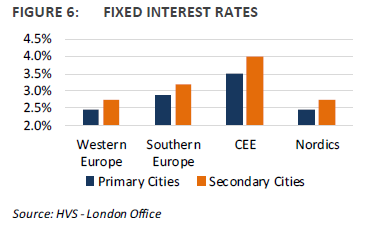 Variable floating rates in basis points (bps) follow a more varied trend, with average margins ranging from 200 bps in primary markets in the Nordics to 350 bps in secondary markets of Southern Europe. While regional differences in lending margins do exist, borrowers continue to benefit from highly competitive lending terms across Europe. 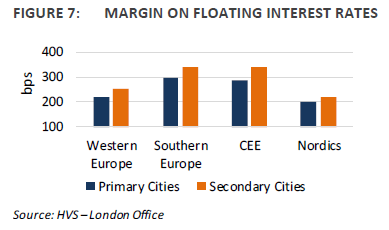 5.  Positive sentiment in hotel financing for the future, challenged by alternative lenders

As we look ahead, the collective sentiment among our respondents is positive. Western and Southern European banks expect a continued increase in the size and number of their hotel loans and a higher proportion of hotel loans compared to other real estate loans over the next 24 months. Interestingly, responses from Western European banks show a more optimistic view compared to last year, reflecting a resilient and growing European hotel industry in combination with a robust global economy.

Western European, Southern European and Nordic banks have indicated that interest rates are likely to be on the rise again, given the current low interest rate environment. Whilst the ECB may begin its first move upwards as late as 2019, the Bank of England already started raising rates for the first time in a decade and it seems likely that other Western European banks might increase their margins in the coming year.

With the UK hotel market thriving in 2017 following the previous year’s Brexit vote, lenders are positive about lending in Britain thanks to increased international arrivals and strong market fundamentals. In spite of cost challenges in a post-Brexit economy, banks continue to rank the UK as their most preferred hotel lending market along with Germany and the Netherlands.

Looking forward, new hotel lending for high-street banks is likely to be for either new acquisitions or refinancing, with almost all respondents agreeing that alternative lenders will become more prominent for riskier projects.

Over the past year, cautiousness derived from increased political risks and economic policy challenges has been replaced by a more positive outlook for hotel lending, and our survey of European hotel lenders indicates a continued appetite for hotel investments in Europe. With strong hotel market fundamentals, debt continues to be available for all project types at compressed margins in most regions, leading to the continued broad popularity of hotels as an alternative real estate asset class and increasing investor interest.

Although we cannot expect interest rates to remain at these historically low levels in the long-term, investors will most likely continue to benefit from attractive terms during the next 12 months and be able to secure financing for their hotel investments.

Peter Szabo is an associate at HVS Hodges Ward Elliott, having previously worked at Horwath HTL’s Budapest office. His primary responsibilities include financial analysis, development of marketing materials and due diligence. Peter is a native Hungarian speaker and also speaks German. He holds a BSc (Hons) in International Hospitality Management from Ecole hôtelière de Lausanne with a specialisation in hotel development. For further information, please contact Peter at [email protected] 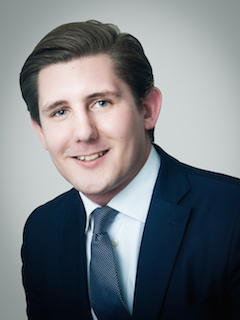 Simon Hultѐn is a Senior Associate with the HVS London office. Before joining HVS, Simon held various positions in the hospitality industry. His main responsibilities include hotel feasibility studies, valuations and market overviews for European hotels. He holds a BA (Hons) in Hospitality Management from Glion Institute of Higher Education with a specialisation in hotel development and real estate. For further information, please contact Simon at [email protected]

This study presents the current lending environment for hotels. It consists of four topics, (1) lending parameters, (2) availability of debt by project and chain-scale segment, (3) loan characteristics, and (4) an outlook on lending criteria. %%ViewCount%% Views Comments
Share:
Subscribe To Newsletter