Nairobi's significance as a transport hub and financial centre for the greater East African community and the various tourist attractions are expected to continue to support growth over the short and medium term.

Kenya lies along the eastern coast of Africa. An estimated (2016) 46 million people reside in Kenya with a population increase of around one million people per annum. Kenya is establishing itself as an important gateway to the high growth East Africa region. In November 2016, Kenya was in the top 10 most improved economies in the annual World Bank report on the ease of doing business. The country moved up 21 places from 113th to 92nd. Kenya is outperforming most of its African counterparts in terms of infrastructure with a number of large projects expected to continue attracting foreign investment. In addition, the country has just completed the SGS acquisition of compliance certification in the Oil and Gas sector and the oil sector is thus expected to become a significant economic driver.

Kenya has made significant structural and economic reforms that have contributed to sustained economic growth. The country has received support of the World Bank Group, International Monetary Fund and other development partners and they have brought positive economic changes to the country. The new constitution and improved court system pushed investor’s confidence and improved the political situation in the country. 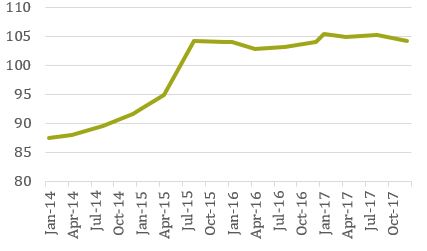 Since 2015, Kenyan economic growth has been relatively stable and is expected to reach 6.0% in 2019. The diversification of the Kenyan economy, with a burgeoning technology sector, is likely to slightly reduce the trade deficit over the next five years. In 2016 Kenya had strong GDP growth thanks to the country’s currency stability, low fuel prices and low inflation rates. In 2017 GDP growth dropped to 4.9%. This slow-down is due to the drought that impacted both the agricultural output and the generation of hydropower. In addition, the challenging access to credit for the private sector combined with the election-related uncertainty that weakened private investment had a negative impact on the national economy. However, being one of the most stable economies in Africa, Kenya will offer an increasing number of opportunities for investors which are likely to boost the economy further in 2018. The presidential elections had a negative impact on tourism in Kenya in 2017. However, the overall ease of security concerns and the conclusion of the elections are likely to have a positive impact on tourism. The recovery of tourism and the growth of domestic tourism will have a positively impact on the Kenyan hospitality.

The rest of this article focuses on the largest market in Kenya, namely Nairobi. 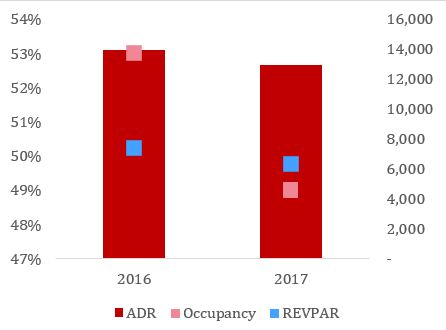 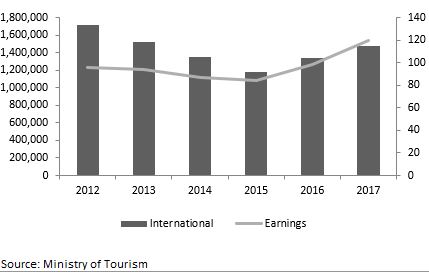 Tourism is one of the top sources of foreign exchange earnings in Kenya, spurred mainly by international visitor arrivals. However, 2016 saw an encouraging rise in the number of visits to the country. After two quiet years, the situation in Kenya started to ease and the confidence returned from
business and leisure travelers. The government has been involved in the promotion of tourism abroad and is supporting and marketing the country to the international and domestic markets. In addition, the rise of Nairobi and Mombasa as key conference destinations boosts the number of international and domestic trips to Kenya. As a result, 2017 saw a clear increase in visitation to Kenya and in earnings from tourism. The industry is well placed to benefit from political stability in 2018.

Nairobi is a hub airport in East Africa. Kenyan Airways has been very active in the past few months with the acquisition of new aircraft and the opening of new routes. The airline has just announced the launch of the first-ever route to the United States; the daily non-stop flights to New York will start in October 2018 and is likely to boost tourists’ arrivals in the next few years. 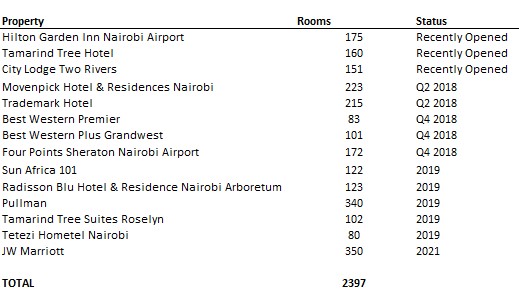 Going forward, an impressive number of hotels are expected to open in Nairobi in the next two years which is likely to have an impact on the hotels’ performance in the short-term. There is a particular push from global hotel chains seeking to tap into this African hub and the opening of new quality supply makes it a leading destination in East Africa. Hilton just opened a Hilton Garden Inn at the airport and City Lodge added 151 rooms in the new Two-Rivers node in the north of Nairobi. Marriott becomes competitive in the Kenyan market with the opening of a Four Points in 2018 and another JW Marriott scheduled in 2021. Radisson Hotels and Accorhotels announced the opening of a Radisson Blu Hotel & Residences and a Pullman respectively in 2019. Many unbranded quality properties are also expected to add rooms into the market, bringing the total rooms’ pipeline to 2,397 rooms. Such an increase in supply is likely to significantly impact occupancy and rate as the market will become more competitive and it will take a few years to absorb the new supply. The entrance of new branded supply will put independent property under pressure and potentially push them to seek branding in the next few years.

Nairobi’s hotel market is rather illiquid due to the lack of transactions in recent years. However, as the security concerns are lifted, and the political situation improves, investors are likely to regain confidence and interest in the market. Capitalization rates are expected to remain stable in the next few years whilst
REVPAR and values are likely to increase.

Nairobi's significance as a transport hub and financial centre for the greater East African community and the various tourist attractions are expected to continue to support growth over the short and medium term. Its tourism infrastructure remains far more developed. In addition, the increasing amount of foreign investments combined with the growing number of major international companies settling headquarters in Nairobi will induce additional demand from the corporate market. Following the conclusion of the presidential elections, we expect the demand to pick up. However, Nairobi will likely suffer from an oversupply in the next few years as a large number of hotels are expected to open in the next few years and the capital will need time to absorb the new supply. Outside Nairobi, there are  several important tours and cities perfectly placed to grow and which require mid-market hotels,
aimed at the local market.

Nairobi's significance as a transport hub and financial centre for the greater East African community and the various tourist attractions are expected to continue to support growth over the short and medium term. %%ViewCount%% Views Comments
Share:
Subscribe To Newsletter