On the three-hundred-year anniversary of the founding of the city, New Orleans welcomes more visitors than ever.

New Orleans has continually been voted one of the top leisure destinations in the country; in 2017, the city and select institutions ranked top on lists from Condé Nast Traveler, Travel + Leisure, Southern Living, and Food & Wine, among others. By March 2018, the city had earned new accolades from almost 30 publications, notably starting off the year as the first stop on the New York Times’ “52 Places to Go in 2018.” The city’s visibility increased in many ways in 2017, from hosting the relocated NBA All-Star Game, to providing the backdrop for the movie Girl’s Trip, and counting down to 2018 for the central time zone on Dick Clark’s New Year’s Rockin’ Eve. While the hospitality industry remains a mainstay of this Louisiana market, continued development in the CBD should help bolster activity in the city.

The service industry supports much of the employment in the city, and while some industries have declined in recent years, new entities have entered the market, and overall unemployment has improved. The decline in oil and gas prices in recent years has led to a softening in the city’s commercial demand drivers; in August 2017, it was announced that One Shell Square would be renamed Hancock Whitney Center in 2018 after the founding company’s space needs were reduced. Film production has also declined in recent years since the “Hollywood South” boom years; however, several television shows remain based in the area, and New Orleans remains a popular feature filming destination.

The medical industry has exhibited growth in the city, starting with the opening of the University Medical Center and the VA in Mid-City’s BioDistrict in 2015 and 2016, respectively. Although the newest expansions are taking place outside of the CBD, the local economy will benefit from the $360-million Ochsner expansion and the $300-million Children’s Hospital expansion.

Visitation to New Orleans has been on a steady rise since 2010, with at least 5% growth in visitor spending each year. Although official counts for 2017 will not be available until the second quarter of 2018, other metrics point to a strong year for New Orleans tourism in 2017. Major events announced that should further increase visibility include the College Football National Championship Game in January 2020 and the NCAA Men's Final Four tournament in 2022.
New Orleans Visitation Statistics

Source: New Orleans Convention & Visitors Bureau
The Port of New Orleans is the sixth-largest cruise port in the United States. Port NOLA reported 2017 as a record year, with 1,150,172 passengers, celebrating the fourth consecutive year of more than one million passenger movements in the city. Royal Caribbean is returning to the market in December 2018; Norwegian Cruise Line will bring the first 4,000-passenger ship to the Port in November 2018. Carnival Cruise Line will increase capacity to a 3,000-passenger ship in 2019. Riverboats are also making a comeback, and American Cruise Lines plans to add a new 190-passenger ship in September 2018. Hotel operators report that cruise passengers remain a continued source of weekday demand, as travelers book shoulder dates before and after cruises to explore the city.

Source: Louis Armstrong New Orleans International Airport
Airport passenger counts have exhibited strong growth since 2013. In 2017, both Spirit and Frontier Airlines added flights, and international flights to London, Frankfurt, and the Bahamas were added by other airlines. The New Orleans Convention & Visitor’s Bureau has concentrated on marketing the city as an international destination in recent years. There is room for growth in both the number of passengers and international flights, as groundbreaking on a new airport began in January 2016, and a topping-off ceremony was held in December 2017. The $993-million project will include a 972,000-square-foot terminal (69,000 square feet of concessions will include many local purveyors), a 2,190-car garage, and 35 gates; the new airport is expected to open in February 2019.

The pipeline for hotel development has slowed in recent years. Major events like the NCAA Final Four in 2012, the Super Bowl in 2013, and the NBA All-Star Game in 2014 highlighted the city’s visibility as a major leisure travel market, and many new hotel projects were announced. However, several of these projects have stalled or been canceled in recent years, leaving a slightly smaller amount of new rooms entering the market in the next few years. In 2017, three new hotels opened in the CBD, and one new hotel opened in Uptown, leading to a 2.5% increase in rooms within the Central New Orleans market. A Homewood Suites by Hilton along the new Rampart streetcar line offers 207 extended-stay rooms, the NOPSI luxury hotel occupies a revitalized a historic building, and the Cambria Hotel & Suites Warehouse District is the newest Choice-affiliated brand in the market. The Alder Hotel was developed in a former nurses’ dormitory adjacent to Ochsner Baptist Medical Center. These hotel openings continue a development trend within New Orleans that is focusing on higher-rated, more-upscale products.
New Orleans New Hotel Supply Pipeline 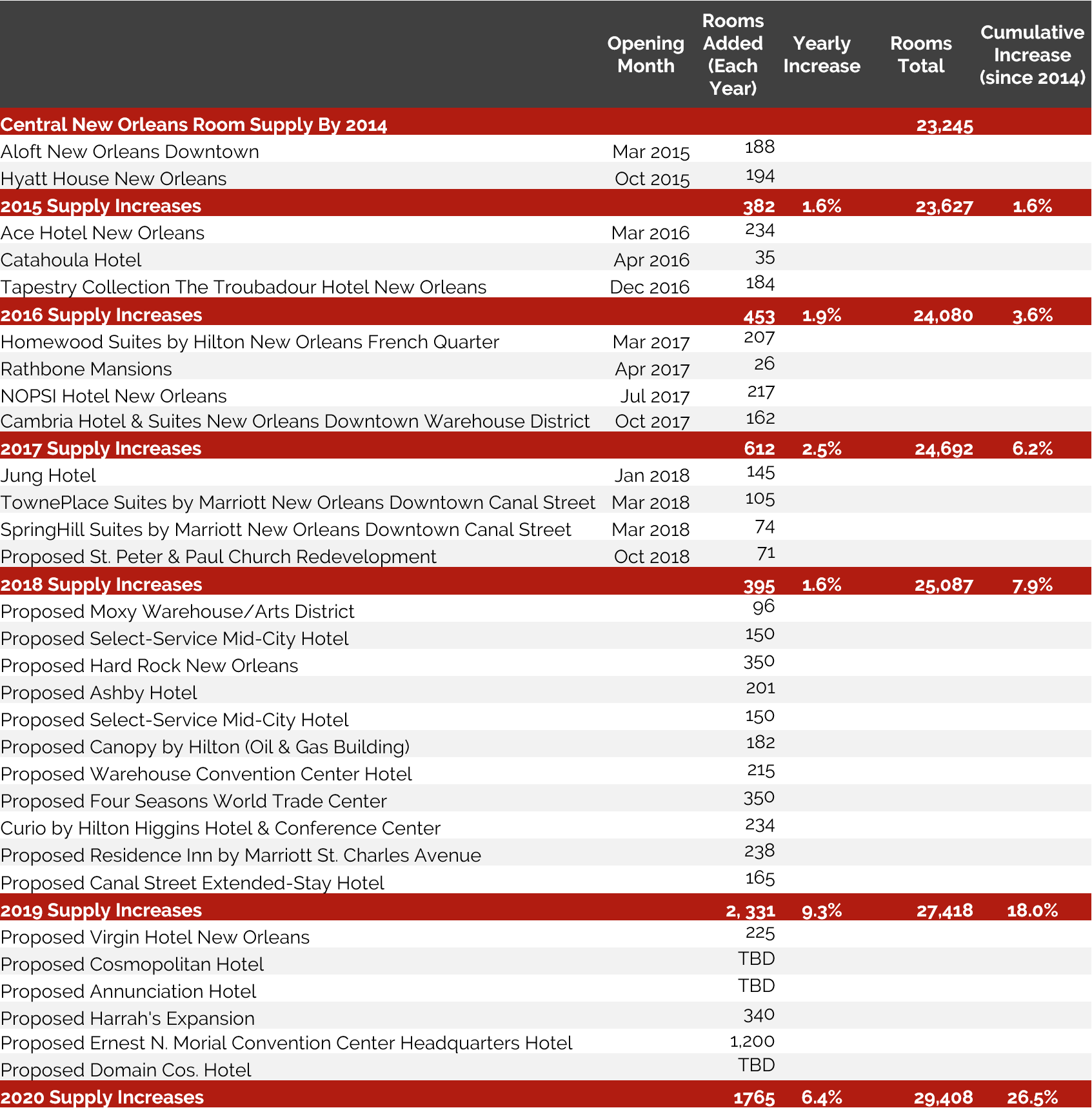 Source: HVS
Many of the hotels announced for the city are more luxury-oriented, a change that may help elevate average rate (ADR) levels in the city. The Jung Hotel, which opened in early 2018, is the reincarnation of a 1907-built former hotel, offering over 21,000 square feet of meeting space to host upscale events. By the end of 2018, the Jung and the under-construction, dual-branded SpringHill Suites/TownePlace Suites by Marriott will result in 1.6% growth in rooms within the CBD. Several additional hotels throughout the city are expected to open by 2019, including the Virgin, Hard Rock, and Four Seasons. Initially, many developers intended to build for openings by 2018, the tricentennial year of the founding of the city; however, many of these openings are now scheduled to come on line in 2019, resulting in a 9.3% increase in rooms by year’s end. The number of rooms projected for 2020 is not yet definite, as we only have room counts for half of the properties announced; however, growth will be over 6.4%, especially given the introduction of the 1,200-room convention center hotel.

Hotel operators have cited the influence of Airbnb as a negative impact, both on occupancy and ADR, as they compete with last-minute cancelations, shorter booking windows, and growing short-term-rental supply; however, we believe that when this new list of upscale and luxury hotels open, New Orleans will attract a more affluent customer who may not have had the city as a top-of-mind destination in past years, and who would not likely look to Airbnb as an option.

The New Orleans market will continue to be a popular leisure market. Major infrastructure developments like the new, world-class airport will increase accessibility to the city. Although cumulative growth in supply will be over 25% from 2015 through 2020, many of the hotels coming on line are redevelopments of former hotels or blighted buildings. Furthermore, much of the new supply announced in the market is destination-focused, ensuring less of an impact on existing hotels; these developments include the Harrah’s expansion, the Curio by Hilton Higgins Hotel (planned to supplement the World War II Museum expansion), and an eventual convention center hotel envisioned as part of the riverfront redevelopment. It seems likely that the number of visitors to the city will reach the goal of 13.7 million visitors by year-end 2018. With more diverse hotel products, increased numbers of flights, and continued development in the New Orleans CBD, the city should continue to top the lists as a world-class destination in the years to come.

Lauren Hock, a leading consultant with HVS New Orleans, has spent more than a decade studying and working with hotels from coast to coast. She has vast experience consulting on hotels along the Gulf Coast, New Orleans, and other important markets throughout the region. Lauren earned her BS in Hotel Administration from Cornell University, and prior to joining HVS held managerial positions at the Sanctuary at Kiawah Island Hotel & Resort and the Cliffs Resort in Shell Beach, California. Contact Lauren at (805) 431-0729 or [email protected].
.

On the three-hundred-year anniversary of the founding of the city, New Orleans welcomes more visitors than ever. %%ViewCount%% Views Comments
Share:
Subscribe To Newsletter