Bangkok comprises an area of 1,569 square kilometres and has a registered population of approximately 5.7 million. The Bangkok Metropolitan Area, which includes Bangkok, Samut Prakan, Nonthaburi, Pathum Thani, Nakhon Pathom and Samut Sakhon, occupies a total area of 7,762 square kilometres or 1.5% of the total land area of Thailand. It has a registered population of approximately 10.7 million. Bangkok Metropolitan Area accounts for a significant portion of the national GDP.
Figure 1: Historical and Forecast Economical Indicators - Thailand

Source: Economist Intelligence Unit, April 2018
Bangkok can be divided into four main districts: Sukhumvit, Silom/Sathorn, Riverside, and Historic Bangkok. The Sukhumvit area, with its plethora of malls, office complexes, attractions and food and beverage venues, is a prime area for hotels. The area along Sathorn and Silom Road is considered to be the traditional central business district of Bangkok, while the Riverside area, along the Chao Phraya river is popular amongst European tourists for its proximity to cultural attractions and the Historical District of Bangkok. Outside of the city centre, various upcoming business districts are found, including Northern Bangkok and Bang Na.

Figure 2: Masterplan of the Expansion of Bangkok Mass Transit Systems 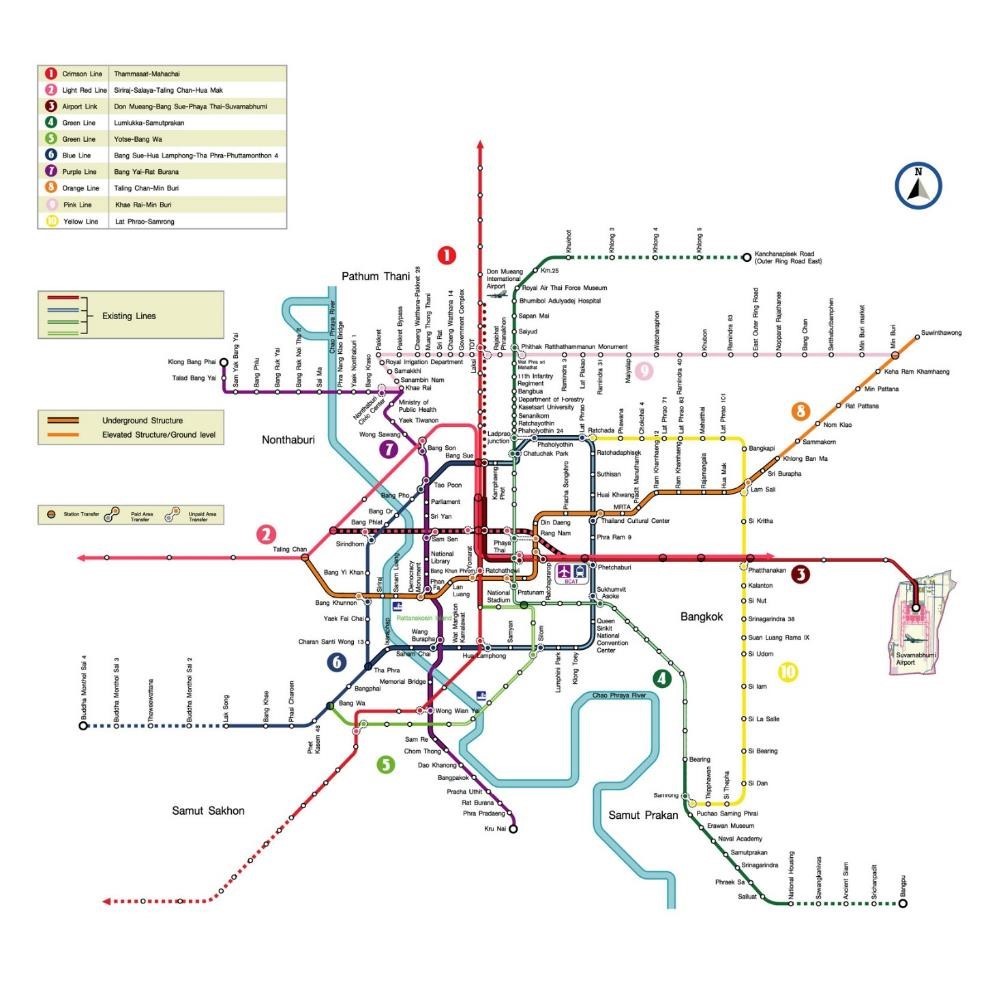 Source: Mass Rapid Transit Master Plan
Bangkok is the hub of transportation connections in Thailand. The city enjoys a good transportation infrastructure including the country’s central train station, two international airports, the Bangkok Mass Transit System (BTS) the Metropolitan Rapid Transit (MRT), port and road networks. The BTS currently has 35 stations on two lines: the Sukhumvit Line and Silom Line; the MRT has 34 stations on two lines: the Blue Line and the Purple Line. There are plans to further expand both the MRT and the BTS as well as to add new lines to ameliorate connectivity within the wider city and ease the heavy traffic congestion.

Plans are currently underway for a number of high-speed rail lines (HSR) in collaboration with China and Japan in an effort to promote sustainable development in infrastructure as well as focussing on energy-efficient rail transportation. The first phase of the North-eastern HSR will link Bangkok with Nakhon Ratchasima province over a 252-kilometre long track, which is expected to be operational in 2021. The Northern HSR is expected to cover a total distance of 670 km connecting Bangkok and Chiang Mai over two phases. The Eastern Economic Corridor (EEC) Board has also approved a high-speed rail project connecting Don Mueang, Suvarnabhumi and U-Tapao airports. Spanning a distance of 220 kilometres, the project is estimated to cost 200 billion baht and will allow commuters to travel the total distance in just 60 minutes.

Furthermore, Bang Sue Grand Central station in Bangkok is currently under construction and is set to replace the current central station at Hua Lamphong upon its completion, and become the largest railway station in South East Asia with a total of 26 platforms. Bang Sue will connect to the MRT transit line and a number of mass transit routes including SRT Dark Red Line, SRT Light Red Line, Airport Rail Link, and the four major train lines. 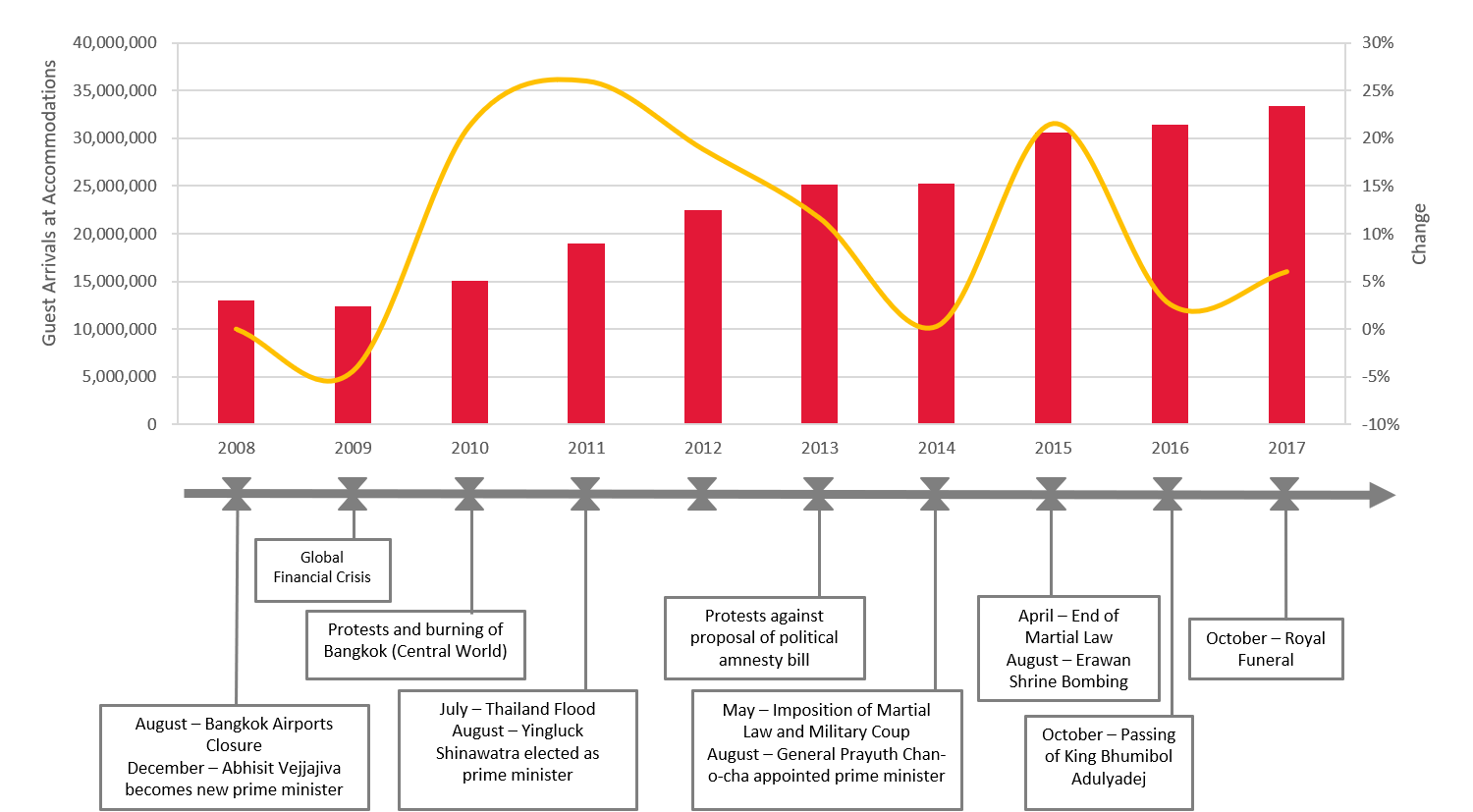 Figure 5 illustrates the nationality of visitor arrivals at accommodation establishments in Bangkok in 2016. The largest international feeder markets were China, Japan, Korea and India, which together made up approximately 30% of total guest arrivals. China alone contributes to 21% of visitor arrivals and is one of the fastest growing sub-segments within the East Asia market, experiencing a growth of 29% per annum as a result of increased air access by charters and low-cost carriers from secondary and tertiary cities in China. The crack-down on the ‘zero-dollar’ tours only had a temporary impact in late 2016. Data by country for 2017 was not released at the time of this article.
Figure 5: Source Market, Bangkok, 2016 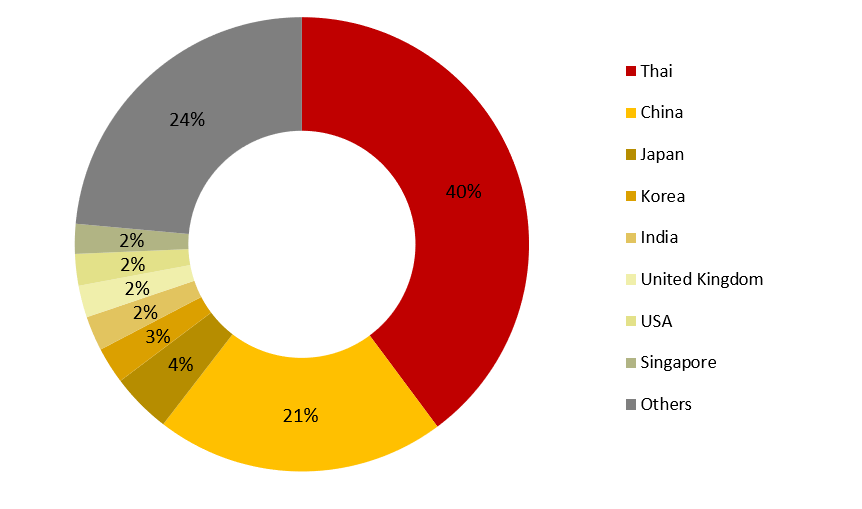 Although Thailand as a whole remains a seasonal destination due to its strong dependency on leisure tourism, Bangkok observes minimal fluctuations in arrivals due to the city’s reliance on other market segments such as corporate as well as domestic demand. As a result, seasonality is relatively flat, with only minor dips that result from internal events such as political issues and natural events such as flooding. Between 2011 and 2016, the average length of stay for Thai visitors to Bangkok remained stable at an average of 3.3 days, while the average length of stay for foreign visitors were recorded at an average of 4.8 days. Short haul visitors tend to stay for a shorter period of time than long haul visitors, hence contributing to the shortening the overall average length of stay.

The aggregate performance of a representative sample of approximately 1,800 rooms is shown in Figure 6. Between 2015 and 2017, average rate achieved a CAGR of 5%. This market experienced limited supply growth until the opening of Park Hyatt Bangkok in 2017. Thus, the sample experienced a decline in its occupancy level of four percentage points compared to the previous year, while successfully improving its average rate, which increased by 12% in 2017, resulting in a positive growth in RevPAR of 6%.
Figure 6: Luxury Hotel Performance, Bangkok, 2015 - 2017 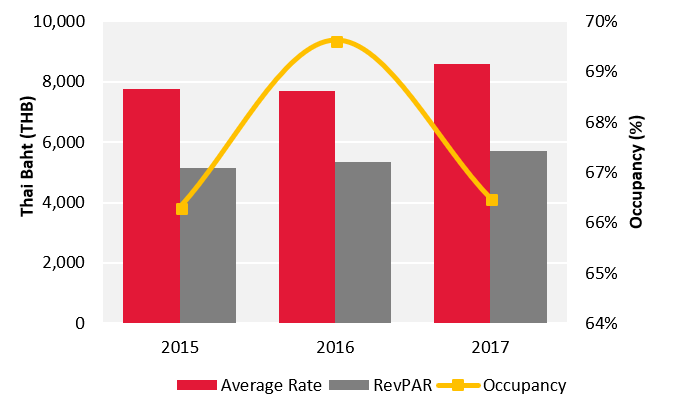 The upscale hotel market consists of branded hotels in Sukhumvit area of Bangkok. The aggregate performance of a representative sample of approximately 5,000 rooms is shown in Figure 7. Upscale hotels registered healthy occupancy levels, which hovered around the high 70% mark and reached 80% for the first time in 2016. A minor growth in occupancy was seen in 2017 as hoteliers shifted their strategies to increase average rates. Between 2015 and 2017, average rate grew by 2% per annum, which was the strongest growth experienced since 2012. This could be attributed to a period of increased demand and political stability in the market. As a result, the market experienced positive growth in RevPAR of 8% per annum.
Figure 7: Upscale Hotel Performance, Bangkok, 2015 - 2017 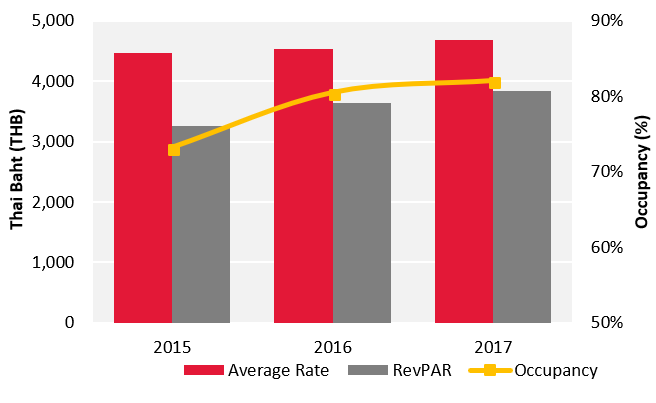 The aggregate performance of a representative sample of approximately 2,000 rooms is shown in Figure 8. Majority of the midscale hotels in this sample are located in Sukhumvit area with good accessibility to the mass transit systems of Bangkok. In 2017, a decline in occupied room nights was attributed to the new supply entering the market. This increase resulted in a decline in occupancy among midscale hotels as the market absorbed the new supply. On another hand, average rates grew annually by 5% over the period. Given the dynamics of occupancy and average rate outlined, RevPAR posted a healthy CAGR of 4%.
Figure 8: Midscale Hotel Performance, Bangkok, 2015 - 2017 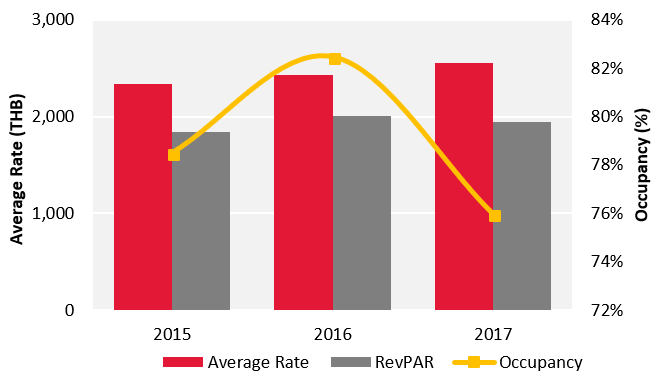 According to HVS Asia-Pacific Hotel Operator Guide 2018, the hotel pipeline landscape in Bangkok is extensive with approximately 10,000 branded hotel rooms entering the market over the next few years. Bangkok’s total room inventory is expected to increase by approximately 30% between 2018 and 2022. Notable hotel developments are highlighted below.
Figure 9: Hotel Pipeline - Bangkok 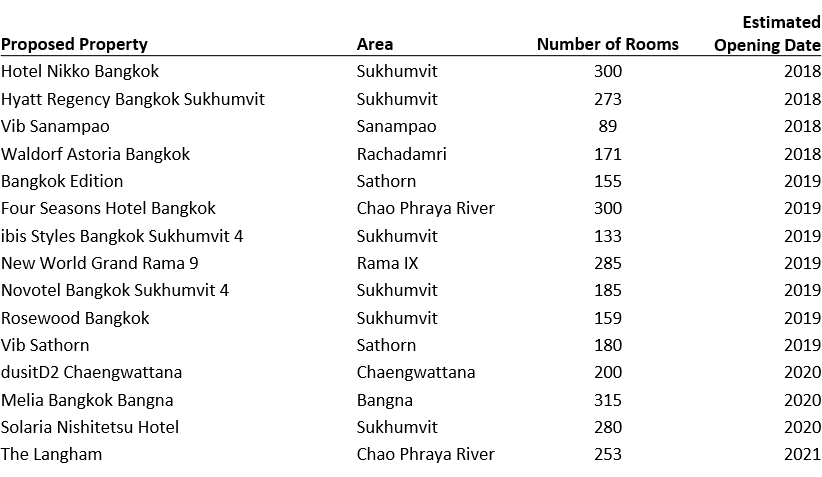 Bangkok is one of South East Asia’s main tourist destinations, offering a variety of attractions, good infrastructure and a secure environment. Despite the political demonstration and bombings, the city’s tourism industry has been a growth driver of the national economy. With continued marketing efforts by the Tourism Authority of Thailand, we consider that Bangkok is likely to remain a favoured destination in Asia. Furthermore, the relatively prolonged period of stability should give confidence to international MICE organisers to start reconsidering Bangkok as a MICE destination and lead to the continued growth of leisure visitors.

The further expansion of the two main international airports in Bangkok will ensure that the city maintains its status as a gateway city, not only for visitors to Thailand, but also for visitors to the Mekong region. However, it should be noted that typically regional visitors have a shorter length of stay than long-haul visitors. The growing popularity of destinations in Thailand should help boost the number of visitors who will spend a few nights transiting in Bangkok. Accessibility within the city should be further ameliorated when the expansion of the mass transit systems is completed.

The overall stability in the market has contributed to the strong performance of hotels during the first two quarters of 2018. The outlook for the remaining months of 2018 is optimistic, driven by expected strong demand levels in international visitor arrivals, coupled with the political stability in the market with elections being postponed to 2019. It is important to also note there is a considerable amount of new branded supply entering the market in the foreseeable future. The right balance between demand and supply of hotel rooms in Bangkok over the short to medium terms will be vital to the success of the lodging industry. We further expect traditional non-core areas to the be the focus of new development, especially those along the new mass transit system routes. Continuous efforts to promote the destination, improve its infrastructure and overall tourism experience should be key priorities going forward.

The following article provides a brief overview of Bangkok, its different sub-markets, its tourism industry, the recent dynamics of the local lodging market, as well as the 2018 outlook. %%ViewCount%% Views Comments
Share:
Subscribe To Newsletter