Hurricanes Michael and Florence are both gone, but the extent of their destruction is now coming into clearer focus. 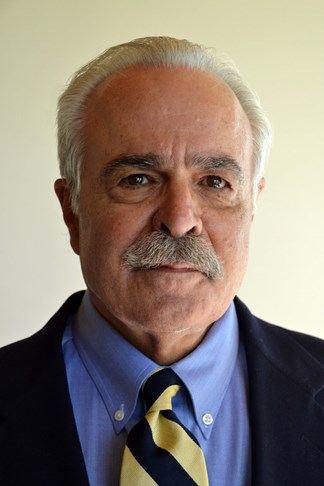 Hurricanes Michael and Florence are both gone, but the extent of their destruction is now coming into clearer focus.

Michael-caused losses in property and income are estimated to be $15 to $21 billion, according to Moody’s Analytics. Boston-based insurer Karen Clark & Company (KCC) released an estimate of $3.7 billion for storm surge alone. KCC’s catastrophe models estimate that Hurricane Michael caused about $8 billion in privately insured losses, which do not include losses covered by the National Flood Insurance Program.

While Michael was the fourth-strongest storm to hit the U.S. since record-keeping began 1951, it was far from the most damaging. By comparison, Florence’s weaker winds and slower speed caused more damage. With two feet of rainfall over a wide swath of North Carolina, many rivers were still rising two weeks after landfall. Moody’s updated estimates of losses range between $38 and $50 billion.
The following table shows the location of the 68 hotels (4,475 rooms) that were closed because of Florence-related damage, as reported by STR, provider of hotel market data and benchmarking services:

Source: STR
And last year was much worse for catastrophic events. Hurricanes Harvey, Irma, and Maria combined with devastating Western wildfires and other natural catastrophes to make 2017 the most expensive year on record for disasters, at $306 billion, according to a January update by Adam Smith, an economist at the National Oceanic and Atmospheric Administration (NOAA). 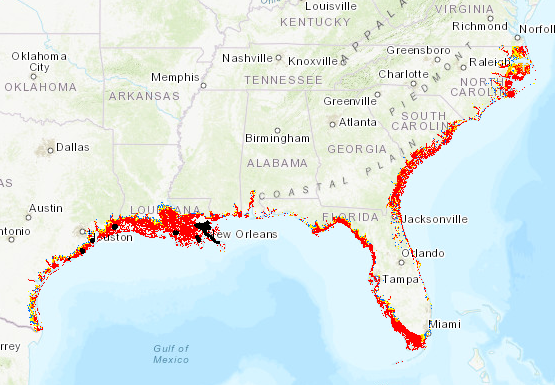 Source: NOAA
The strongest storms may be getting more frequent as this century plays out. The following NOAA model shows the possible increase in Category 4 and 5 storms in red: 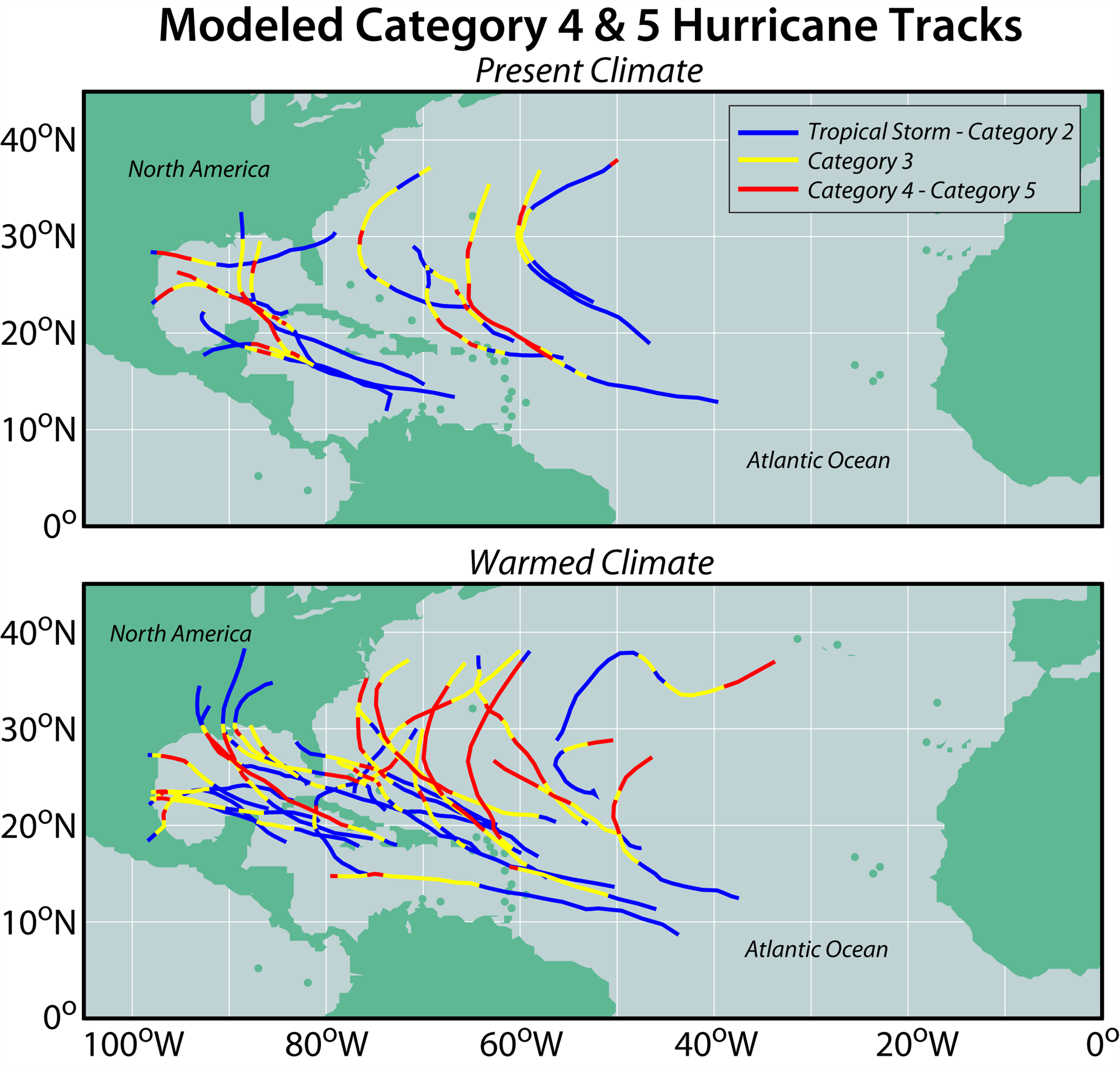 Source: NOAA
Floods are the most common and most destructive natural disasters in the United States. Ninety percent of all natural disasters involve flooding, and all 50 states have experienced floods or flash floods in the past five years, according to Floodsmart.gov. The damage from a flood is not covered under a standard insurance policy. Flood insurance is a special policy that is federally backed by the National Flood Insurance Program (NFIP) and managed by the Federal Emergency Management Agency (FEMA).
The NFIP aims to reduce the impact of flooding on private and public structures by providing affordable insurance to property owners and by encouraging communities to adopt and enforce floodplain management regulations. These regulations are based on floodplain maps called Flood Insurance Rate Maps (FIRMs), which monitor Base Flood Elevations (BFEs). The relationship between the BFE and a structure's elevation determines the flood insurance cost, according to the National Association of Insurance Commissioners.
The most important aspect of this federally supported insurance program is a potentially onerous rebuilding provision that is intended to reduce future losses: if the cost of a repair, rebuild, or addition is more than 50% of the pre-flood value of the building, the new or renewed structure must be 100% in compliance with existing building and floodplain management regulations. This is the case even if the building was constructed prior to the FIRM or if the regulations became stricter after construction. This means that compliance could require elevating the entire building above BFE or undertaking a major reconstruction project.
Natural catastrophe or “nat-cat” losses generally fall into two primary categories: physical loss related to structure, FF&E, and inventory and loss related to business interruption.
Physical repairs to hotels can have additional challenges, such as tightened building codes or zoning ordinances both in- and outside of flood zones. Also, debate may center around whether planned rebuilding constitutes a return to “as was” or an arguable improvement. Loss recovery (indemnity) will be based on an agreement of the insured and the insurer as to the categorical cause of loss. For example, it is critical that both parties understand how “flood” and “wind storm” are being defined in a policy. According to Duncan Ellis, U.S. Property Practice Leader at Marsh, an insurance brokerage and risk management company, “while you may have coverage in one area—i.e., flood—you may find that the very same loss is actually storm surge under wind storm.”
Resolution of a business interruption claim for hotels can be particularly challenging because it can have so many moving parts (hotel departments, for example, are run like mini-businesses within a hotel) and because the loss-of-business duration usually exceeds the physical rebuilding period. “The impact on profits, on business income, from natural disasters can be more significant than on the cost to fix physical damage,” reports Linda Kornfeld, Vice Chair of the Insurance Recovery Group at law firm Blank Rome.
Basic business interruption policies will cover lost profits from a complete or partial shutdown of the hotel. Partial shutdowns can result from guestrooms, F&B operations, or income-producing amenities being out of order or inoperable. A partial shutdown can also be caused by hotel suppliers’ or service providers’ inability to service the hotel normally. Complete shutdown can be caused by acute physical damage or diminished accessibility, such as civil evacuation mandates or infrastructure issues like impassable roads or utility grid failures.
When making a business interruption claim, credibility counts. That means having established disaster plans in place and a claims team at the ready. This team should have well defined roles and responsibilities and should consist of risk management, legal, HR, and hospitality operations and valuation/appraisal professionals.
A partial shutdown will likely put immediate stress on the cash flow of a damaged hotel, as operating costs weigh heavily on reduced revenues. Even in the case of a total closure, obligations such as salaried payroll, taxes, mortgage obligations, and, yes, insurance – continue.
Experts believe that the most important focus for an owner (after the safety and welfare of employees) is claim-based income from the insurer. “When there is P&L or balance sheet impact, it is critical that we get the insurer on board with the funding of losses—that is one of the most strategic things you can deal with,” suggests Paul McVey, Managing Director of Marsh Claim Practice. Ray Hutnick, financial practice leader at Marsh Risk Consulting, concurs with the need for proper support for a request for interim payments. “Transparent structured interim payments should be based on properly supported committed costs. You don’t want to be fronting a lot of money and then have checks come later. So, if you properly document during this process . . . it can help you recover and get back into normal operations.”
Ultimately, losses for both physical damage and business interruption need to be tallied by specialists. In her Checklist for Business Interruption Losses, Lorelie Masters of Hunton Andrews Kurth, an insurance litigation and counseling practice, points out that “policies typically contain general provisions for determining the amount of business income loss and extra expense involved. They may point to the need for help from [experts].”
In formulating an initial claim estimate, a hotel expert will collect and review departmental P&Ls, budgets, and staffing—adjusted for such variables as seasons, holidays, school breaks, conventions, and special events. S/he will ideally have—or have access to—the historical performance of competitive hotels in the market in order to benchmark against those with minimal or no operating impact from the damaging event.
A chosen hotel consultant should be an experienced appraiser with strong financial analysis capabilities, as well as National Flood Insurance claims experience. The ability to mine supporting information and to identify, analyze, and lucidly explain special circumstances will fortify a claim presentation to an insurance adjuster and bring significant stability to a destabilizing event.

Marks holds the position of Managing Director of HVS Development Services and Hotel and Shared Ownership Consulting, which assists resort developers with project conceptualization and feasibility; specializing in luxury branded residential as a vital component of new and repositioned projects. His experience includes business development through such means as strategic alliances, acquisitions, conversions, and branding. Formerly with HVS Capital Corp., Mark assisted developers, investors, and owners of hospitality assets in financing, investment sales, and capital advisory. Contact Mark at (407) 701-3000 or [email protected].

Hurricanes Michael and Florence are both gone, but the extent of their destruction is now coming into clearer focus. %%ViewCount%% Views 2 Comments
Share:
Subscribe To Newsletter