In Part 1 of this series, I discuss the importance of deriving a proper revenue estimate for valuations of independent, budget motels and testing its reasonableness against the norms for the neighborhood and market.

Independent, budget motels are often operated by resident owners that are talented at running efficient, safe motel operations but lack sophisticated and complete financial models that generate proper reports upon which to base purchase and valuation decisions. It is important for a buyer to understand that available financial information may not tell the full story, and relying solely on what is available may sell short the profit potential of the hotel and, ultimately, its true value. In Part 1 of this series, I discuss the importance of deriving a proper revenue estimate and testing its reasonableness against the norms for the neighborhood and market.

Budget motel owners may not have much more than annual tax returns when it comes to income and expense documentation. However, our experience has found that these returns rarely tell the full story. Most returns, for one reason or another, do not reflect all collected revenue; moreover, significant segments of revenue may sometimes be left out. This revenue may be collected in cash and dispersed to pay other expenses before being recorded due to a lack of proper accounting systems and procedures. However, this revenue is essential to understanding the value of the motel, as a typical buyer of the motel would be expected to properly collect and record all revenue generated by the property.

This is where the hotel consultant must dig deeper to properly understand the true revenue. Rooms revenue will likely account for 98% to 99% of the total revenue. Investigation can begin during the property inspection itself. How many rooms are vacant at the time of inspection? How typical is the current day relative to other days of the week, month, and year? A consultant fluent with the neighborhood and market can then ascertain what the motel’s most likely occupancy level would be and can compare this to the statistics being provided by the motel owner.

Next, what is the current daily offered rate, and how does this change for double occupancy? It is also important to understand the configuration of the room types and the different rates that may be charged for a slightly larger or smaller room from the norm. Understanding how the rate changes over the course of a week, month, and year is also important. Additionally, an investor must understand how room rates have changed in recent years; however, it is our experience that rates change slowly in the budget tier, and sometimes do not change substantially for two or more years at a time. Once this critical analysis is complete, the consultant can derive a proper understanding of the hotel’s rooms revenue that would not have been evident by the incomplete tax return.

By way of example, say you are consulting on a 1965-built, exterior-corridor motel that has 30 rooms and you receive a tax return with reported revenue of $355,000, of which $350,000 is dedicated to rooms. The motel is under contract for $1.5 million (with little capital expenditure required to maintain current operations), which implies a 4.2 rooms revenue multiplier (RRM). However, after your thorough investigation of the property and the market, you estimate that the property achieves an occupancy of 70% and an average rate of $65, which supports a rooms revenue level of roughly $500,000 (not the $350,000 stated on the tax returns) and implies an RRM of 3.0 when divided into the $1.5 million contract price. 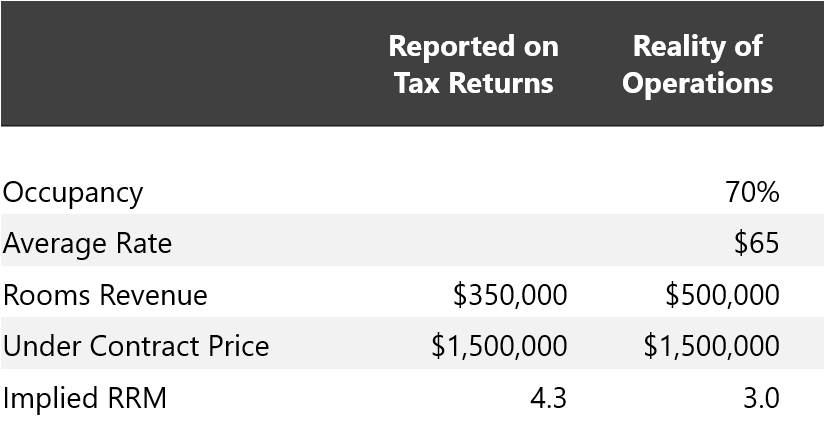 Of course, this 3.0 figure, not only being based in the reality of the property’s revenue collections, is a much more reasonable and normal RRM figure for a property of this age and profile. The $500,000 figure for rooms revenue also helps support the ultimate debt service that would be carried by the property, as well as the funding of other fixed costs of the operation. It is most likely that the buyers of this property fully understood that the hotel collects that level of revenue, which ultimately supported their offer prices at a 3.0 RRM (assuming the 3.0 RRM as normal for this market). Finally, had the consultant relied solely upon the $350,000 revenue stated in the tax return and applied a 3.0 multiplier, a value indication of just over $1 million could have short-changed the hotel 1/3 of its ultimate value.

I’ll continue this discussion in a couple of additional articles that address other pitfalls of motel valuations and investments. Beyond a proper understanding of a property’s revenue, there are some other important factors to investigate before diving into your next motel investment.

Rod Clough, MAI, President - Americas, oversees strategy execution throughout 40 Americas locations. He recently brought together all US Valuation Consulting offices under common ownership, and has revolutionized the way the company is led and managed. This group of offices represents over 120 hotel industry professionals and executes over 4,000 assignments a year. Rod has been working in the hospitality industry for 30 years and is a graduate of Cornell's School of Hotel Administration. He is a Designated Member of the Appraisal Institute (MAI) and a state-certified general appraiser. Contact Rod at (214) 629-1136 or [email protected].

In Part 1 of this series, I discuss the importance of deriving a proper revenue estimate for valuations of independent, budget motels and testing its reasonableness against the norms for the neighborhood and market. %%ViewCount%% Views 2 Comments
Share:
Subscribe To Newsletter