The Houston lodging market has experienced significant fluctuations in recent years, driven by increases in supply, an energy recession, a Super Bowl, two MLB post-season runs, and one of the costliest natural disasters of all time. In this article, we look at where we go from here.

All things considered, the Houston economy weathered the worst energy depression since the 1980s relatively well, highlighting the depth and diversity of Houston’s economic base today. Job growth in other sectors, such as healthcare, professional services, and construction, helped offset the approximately 25% loss in energy-related jobs. While the oil-and-gas industry is no longer the sole pillar of the local economy, it remains, nonetheless, and integral component. Hiring activity tied to oilfield services and the manufacturing industry has picked up in response to rising oil prices and increased activity in the Permian Basin; however, the jobs related to the exploration and extraction sector (the upstream-related jobs that support areas like the Energy Corridor) have been slow to return.
Key Performance Indicators 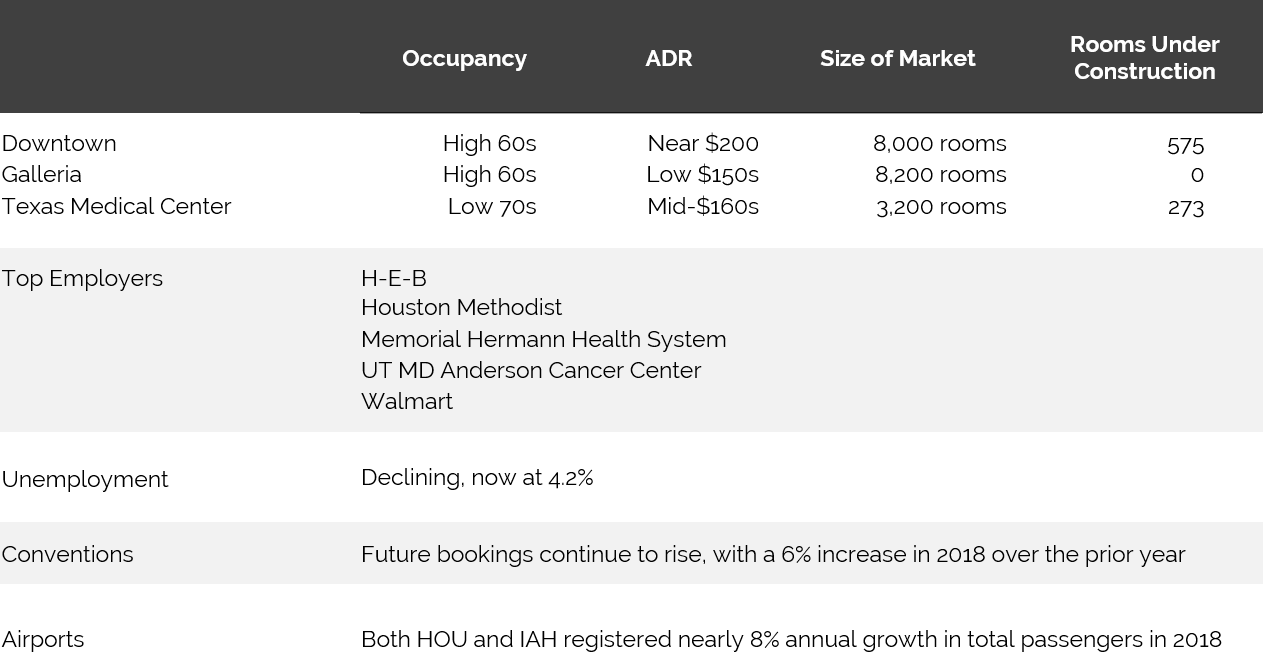 The Texas Medical Center, the largest medical complex in the world, continues to grow, most notably through the planned 30-acre biomedical research hub known as TMC3. This collaborative mixed-use campus is expected to break ground this year and open in 2022. The recent opening of the Intercontinental Medical Center, as well as the early-2020 planned opening of the Westin Medical Center, should bolster average rates in the submarket in the near term.

The Downtown submarket has realized the most growth within the hospitality sector in recent years. The opening of the Marriott Marquis in late 2016, as well as the openings of the Hotel Alessandra and Le Méridien in late 2017 have provided an elevated guestroom to the competitive market and have enabled the convention center to accommodate more groups with 1,500+ room nights on peak. The three hotels under construction in this submarket (AC Hotel by Marriott, Hyatt Place, and Cambria Hotel) are all categorized as upscale, select-service hotels. The volume and timing of the additional rooms may create a more competitive rate environment for similarly priced hotels that lack competitive differentiation in the near term. Nonetheless, the long-term outlook is positive. Downtown Houston is supported by a myriad of employers, including nine Fortune 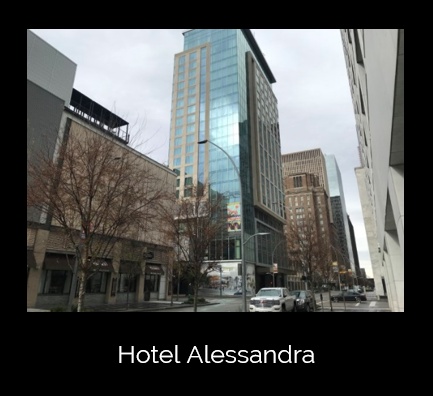 500 headquarters. Two new Class-A office buildings, Skanska’s Capitol Tower and Hines’ Texas Tower, are under construction in Downtown’s Historic District. The 35-story Capitol Tower is expected to open in 2019, while the 47-story Texas Tower is anticipated to open in 2021. Downtown’s residential population has increased significantly in recent years, with three additional residential buildings featuring nearly 900 units currently under construction. Most notably, Hines’ 46-story residential building will be one of the tallest such buildings in the state when it opens in 2022. Moreover, the redevelopment of dated properties, including the Lancaster Hotel, which reopened in October 2018, and the DoubleTree by Hilton, which will reopen as the C. Baldwin, a Curio Collection by Hilton affiliate, mid-year 2019, should continue to bolster average daily rates.

Nowhere has Houston’s recent luxury trend been better epitomized than the Galleria area, home to the city’s only AAA, Five-Diamond hotel, The Post Oak Hotel at Uptown Houston, which opened in March 2018. The property boasts a wine room with $3,000,000+ in inventory and a 20,000-square-foot, full-service spa with a five-star rating from Forbes. The Galleria shopping mall continues to support this submarket with retail shopping venues that are unparalleled in other submarkets across the city. In 2017, the mall’s owner unveiled a new, $250-million wing that features 35 luxury shops and high-end dining venues. In 2018, a new, $500-million mixed-use development was announced for the corner of Post Oak Boulevard and Richmond Avenue. The development, which is expected to be anchored by a luxury Rosewood Hotel with 150 rooms and 80 residences, is anticipated to break ground this year and open in 2023. Both The Post Oak Hotel and the to-be-developed Rosewood will test the rate ceiling of the Galleria area and Houston as a whole.

Houston’s economic base is benefiting from increased diversity compared to prior economic cycles. The prospect of a recovery in energy-related demand continues to bode well for hoteliers in the near term and should help absorb new supply. With recently opened luxury supply and planned developments, including a Rosewood Hotel in the Galleria area and a W Hotel downtown, the outlook is positive, as the new supply should help boost average rates in the city’s key submarkets.

HVS continues to regularly consult in this city, with the Houston office serving the greater Texas Gulf Coast region. The Houston HVS team is ready to assist you on any consulting need you may have. Eric Guerrero with HVS Brokerage can also discuss any Houston asset you may be considering selling in 2019.

Shannon Sampson is a Senior Vice President and oversees both the Austin and Houston offices for the firm. Shannon earned his bachelor's degree from The University of Texas Austin and has extensive experience in hotel operations and management. Shannon lives in Austin and works extensively in the Central and South Texas regions. Contact Shannon at (512) 626-9172, or [email protected].

The Houston lodging market has experienced significant fluctuations in recent years, driven by increases in supply, an energy recession, a Super Bowl, two MLB post-season runs, and one of the costliest natural disasters of all time. In this article, we look at where we go from here. %%ViewCount%% Views 2 Comments
Share:
Subscribe To Newsletter