This publication provides an overview of current and historical trends in the federal lodging per diem, with a focus on the per diem rates for the top hotel lodging markets, as defined by STR.

Government per diem rates are set for a number of locations, many applying to multiple regions or localities in each state. A per diem rate is made up of three components: a lodging allowance, meals allowance, and incidental expense allowance[1]; however, this article and the data presented below focus solely on the lodging allowance. The per diem lodging rates, which provide a maximum amount that a federal traveler can reimburse, are based on the costs of mid-priced hotels and are set annually by the U.S. General Services Administration (GSA). The following article examines the per diem trends of the top 24 lodging markets, as defined by STR, which reportedly make up roughly 32%[2] of the total number of hotel rooms across the country. Hawaii is typically included in this list of top lodging markets; however, it has been excluded because the per diem rates are only set for the continental states.

What is a Per Diem Rate and How is it Calculated?

Since 2005, the U.S. General Services Administration (GSA) has set the rates for the continental United States based on the average daily rate (ADR) data provided by STR, less 5%. There are also a number of criteria on which the GSA bases its calculations, including (1) hotels that comply with the Hotel & Motel Fire Safety Act of 1990, (2) properties within the mid-price range by STR, (3) ADR data from the prior twelve-month period, (4) Monday through Thursday weekday travel data, and (5) sustained seasonal rate periods. Given the criteria above, the GSA sets a standard continental United States (Standard CONUS) per diem rate; however, it also establishes individual rates for Non-Standard Areas (NSAs) that tend to have per diem rates higher than the standard.
As one can imagine, the per diem rates, as well as the areas represented, change annually as trends in local economies vary. For example, hotels in certain counties or cities may historically have been in the standard rate category, but perhaps their lodging ADRs have since increased, thus requiring that the GSA create a new NSA for that destination to allow a higher allowance to the federal traveler. The opposite also applies. For fiscal 2020, 322 NSAs were considered to have higher rates than the standard rate, which was reported to be $96 for the lodging allowance.[3]
For the FY 2020 per diem study, the GSA used ADR data generated from April 2018 to March 2019, but the rates are not effective until October 1 of each year. The following data[4] reflect lodging average per diem rates for the top U.S. lodging markets, taking any seasonality into account, presented in order from the destination with the highest difference above the Standard CONSUS.
Top U.S. Lodging Markets: Average Per Diem Rates – Rankings 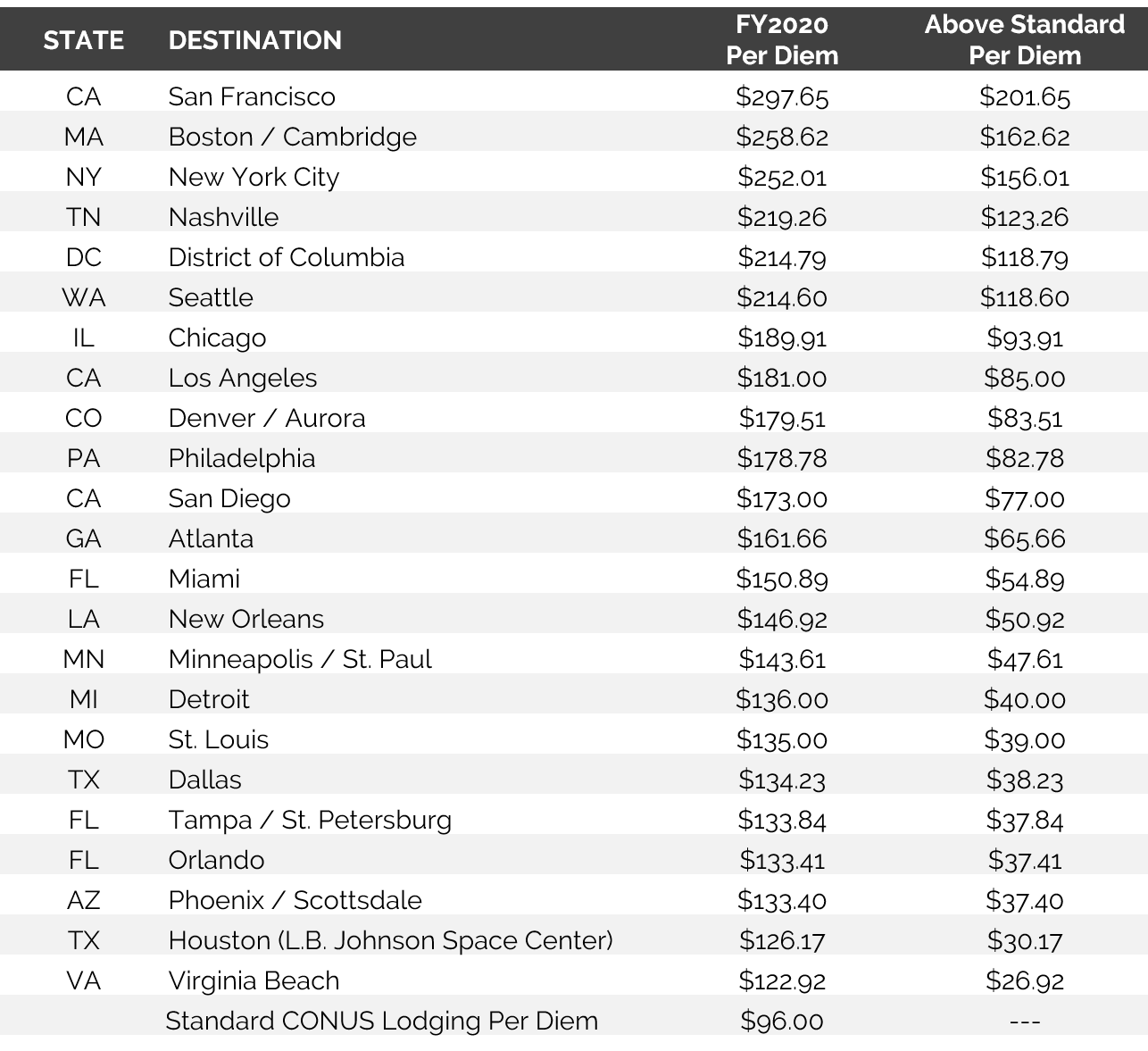 As mentioned previously, per diem rates can change annually. The following data illustrate the change in rate over the last five fiscal years. With the key below, the reader can see that market per diem rates change relatively frequently, often tied to the overall health of the area’s lodging market performance. The markets below are presented in alphabetical order.
Top U.S. Lodging Markets: Lodging Per Diem Rates – Five-Year Trend 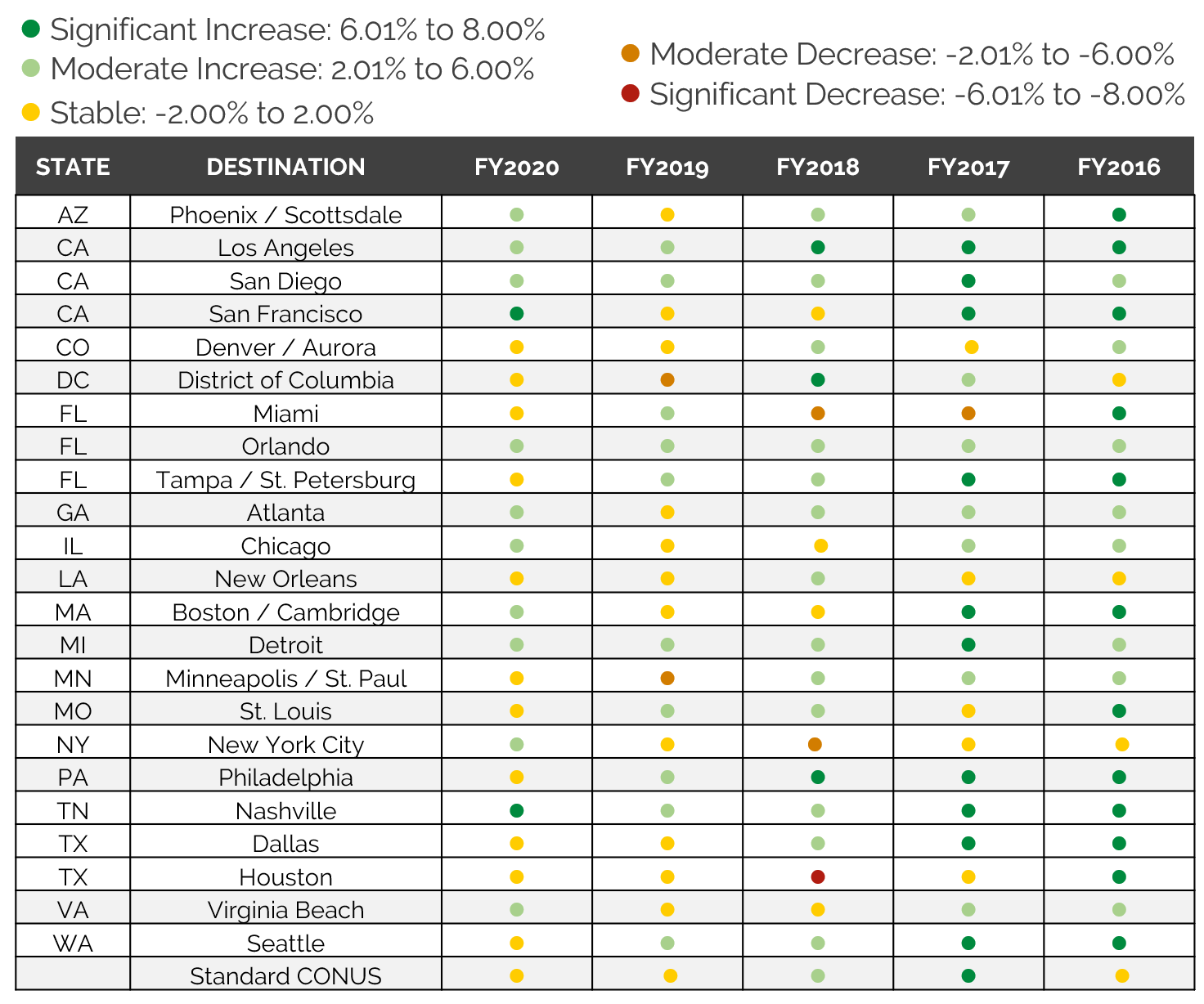 Source: U.S. General Services Administration
While federal travelers may not represent primary sources of demand in many markets throughout the U.S., the rates still provide a number of economic indications for certain areas. From a valuation standpoint, in markets where federal government travel is significant to hotel demand, a hotel’s pro forma and any revenue projections should heavily consider the most recently published rates, including the seasonality changes and recent changes that may affect future per diem rates, as this could influence the hotel’s revenues.

This publication provides an overview of current and historical trends in the federal lodging per diem, with a focus on the per diem rates for the top hotel lodging markets, as defined by STR. %%ViewCount%% Views 1 Comments
Share:
Subscribe To Newsletter