The outlook for 2010 is for strong demand growth, and the industry is expected to regain stabilized levels of operation by 2014. Hotel values are also improving, fueled by both stronger fundamentals and improving investment market conditions.

The Consulting and Valuation division of HVS has issued revised forecasts for the U.S. lodging industry. The outlook for 2010 is for greater strength than previously anticipated, although average rate is forecast to fall below the level recorded in 2009. The industry is now expected to recover more quickly than previously anticipated, and to regain stabilized levels of operation by 2014. Hotel values are also expected to rebound more rapidly, fueled by both stronger fundamentals and improving investment market conditions.

The following chart summarizes our forecast of occupancy, average rate, and RevPAR for the U.S. lodging industry through 2015. For a complete summary of the supply and demand forecasts on which these projections are based, please click here.

Demand growth resumed in 2010, led by select markets that had recorded positive growth trends in the fourth quarter of 2009. The pace of demand growth has accelerated through the year, and HVS now forecasts that lodging demand in the U.S. will increase by 7.5% in calendar year 2010. A return of business travel and some group activity have contributed to these positive trends. However, we believe the resurgence in demand is being fueled in part by the significant price discounts that are now widely available. These discounting policies have resulted in further decreases in average rate through the first half of 2010. The magnitude of the average rate decline is forecast to diminish over the balance of the year, as demand continues to strengthen and year-over-year comparisons become easier. Nevertheless, HVS forecasts that the national average rate will decrease by an additional 1.0% in calendar year 2010. These occupancy and average rate forecasts yield a RevPAR forecast of $55.80 for 2010, a 4.3% increase over the 2009 level.

The forecast for 2011 anticipates that demand growth will decrease from the accelerated pace achieved in 2010, as the economic recovery is expected to continue at a moderate pace. As employment levels improve through 2012 and 2013, demand growth is forecast to increase, but will remain below the levels recorded in 2010. The commercial and meeting and group sectors are expected to continue to strengthen throughout this period. These trends, combined with the low levels of supply growth anticipated through 2012, should boost occupancy to above the 60% mark by 2012. Strengthening demand and occupancy should permit hotels to reduce and eventually eliminate the deep discounts implemented in response to the recession; ultimately, price increases are also expected to be implemented. The net result will be accelerating rate growth as occupancy nears stabilization.

The Outlook for Hotel Values

The improved outlook for the lodging industry fundamentals extends to hotel values, which are now forecast to rebound by 16.1% in 2010. This recovery is also being fueled by lower equity return requirements, driven by the large amount of equity capital entering the hospitality sector and the scarcity of quality assets for sale. Similarly, the mortgage component of the investment equation is returning to more normal levels. Debt is increasingly available for high-quality assets, as lenders have recognized that the lodging sector is recovering. Although spreads for hotel debt continue to be at the upper end of the range for commercial properties, the prevailing low cost of capital is keeping hotel interest rates at low levels. Loan-to-value ratios remain conservative, reflecting the lingering effects of the credit crisis. With lowered debt and equity return requirements, hotel values have begun to rise from their nadir in 2009. 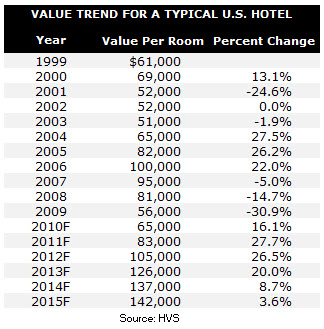 Improving fundamentals are expected to combine with a broadening of investment activity to drive values higher over the period 2011 to 2014. Accelerated average rate growth is expected to result in exponential increases in net income levels as compared to those recorded at the low point in the cycle, which in turn will support significant value increases.

Anne R. Lloyd-Jones, MAI, CRE, is the Director of Consulting & Valuation Services, National Practice Leader at HVS, the premier global hospitality consulting firm. Since joining HVS in 1982, Anne has provided consulting and appraisal services for over 5,000 hotels. Anne’s particular areas of expertise include market studies, feasibility analyses, and appraisals. She is also an expert in the valuation of management and franchise companies, as well as brands. Her experience includes a wide range of property types, including spas and conference centers. She has appeared as an expert witness on numerous occasions, providing testimony and litigation support on matters involving bankruptcy proceedings, civil litigation, and arbitration. For further information, please contact Anne at +1 (914) 772-1570 or [email protected]

The outlook for 2010 is for strong demand growth, and the industry is expected to regain stabilized levels of operation by 2014. Hotel values are also improving, fueled by both stronger fundamentals and improving investment market conditions. %%ViewCount%% Views 7 Comments
Share:
Subscribe To Newsletter