Industry Recovery Ahead of Pace

Each year I give a state of the U.S. hotel industry presentation at the NYU Hotel Investment Conference. My perspective focuses on values, transactions and capitalization rates. My column this month provides highlights of the assessment.

Hotel Values
HVS tracks the value of a typical hotel in the U.S. through our Hotel Valuation Index (HVI). The following table shows the value per room plus the percent change in value from the year 2000 projected out to 2015.

The HVI starts in the 2000, which was a peak year for values when a typical hotel in the U.S. was worth $67,000 per room. The year 2001 marked the start of a recession and values dropped 24%. After two years with no growth, recovery commenced in 2004 with values increasing 27%. This growth continued until 2007 when we entered the most recent and deepest recession.

When I gave my NYU presentation last June the future was not as rosy. I thought 2010 would be a flat year with no growth in values. The following table compares the value projections I made last June to what actually occurred and what we are projecting for the future.

As you can see from the presentation this year, the recovery actually started in 2010 with values increasing 17%. This increase was a result of a spike in RevPAR that occurred late in the year that pleasantly surprised industry experts. Because of the rally, the projected growth in values is essentially a year ahead of what we expected this time last year. Looking further into the future, I now project values to reach $151,000 per room by 2015, which is about 16% higher than last year’s projection of $130,000.

Hotel Transactions
HVS tracks all hotel sales around the world. 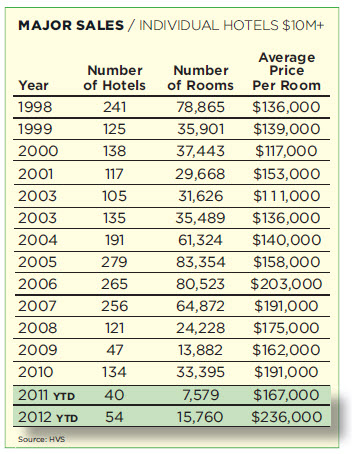 This table shows the major U.S. sales, which we define as single asset transactions of more than $10 million. The peak in the number of major sales occurred in 2005 with 279 deals. From there, the volume declined each year reaching a bottom of 47 in 2009, which was the lowest number in memory. In 2010 the market rebounded somewhat with 134 major sales. While year to date 2011 numbers show we are ahead of last year by 14 transactions, the table shows transactions this year have involved larger and more expensive properties.

Hotel Capitalization Rates
Hotel capitalization rates and other rates of return have fallen to one of the lowest points in memory. For luxury hotels, the rates for trailing 12 months of net operating income range from 3% to 5%. Rates based on Projected Year One NOI are 5% to 7%. Equity yields (10-Year Equity IRR) are 12% to 15%. Terminal Cap Rates used to calculate the sale at the end of the 10-year holding period are 6.5% to 8%. Discount rates (Unleveraged 10-Year IRR) are 9% to 10.5%. The rates for the Upper Upscale and Upscale/Midscale segments are typically 100 to 250 basis points higher than those used for luxury hotels.

These rates are the lowest we have seen in a long time and are due to low mortgage interest rates, the large amount of equity capital chasing very few acquisition opportunities and the fact that there is huge upside potential in future NOI.

Final Takeaways
At the end of my NYU presentation, I always include my observations and recommendations:

Stephen Rushmore is president and founder of HVS, a global hospitality consulting organization with offices around the world. Steve has provided consultation services for more than 12,000 hotels throughout the world during his 35-year career and specializes in complex issues involving hotel feasibility, valuations and financing. He can be reached at [email protected] or 516 248-8828 ext. 204. For a complete copy of my NYU presentation, send me an email.

Reprinted with the permission of Lodging Hospitality magazine, this July column shares information presented by Rushmore at the NYU Hospitality Investment Conference; perspective on transactions, values and capitalization rates.

Steve Rushmore is the founder of HVS, a global hospitality consulting organization with more than 50 offices around the globe. He is focused on future office expansion and new product development outside the United States. Steve has provided consultation services for more than 15,000 hotels throughout the world during his 40-year career. For more information contact Steve at [email protected]