Since 1989, the federal government has instituted five rounds of its Base Realignment and Closure (BRAC) process in an effort to re-envision and reorganize the nation’s widespread network of military complexes. Following the recommendations of BRAC commissions, select bases were closed, while others were expanded with new facilities and thousands of additional personnel. Following recommendations from the most recent BRAC commission in 2005, every branch of the military—Air Force, Army, Coast Guard, Marines, and Navy—now has major operations in the southeastern U.S., and this in turn has impacted the fundamentals of the region’s hotel markets. The following article looks at recent effects from BRAC on representative markets in Georgia and the Carolinas.

Military Demand, Per Diem and Average Rates for Hotels

Many of a military base’s permanent staff members, personnel, and some visitors are housed on site, but the influx of tens of thousands of these people to some bases as a result of BRAC has oversaturated base accommodations; hence, local hotels reap the overflow. Training activities, contract jobs, and graduation ceremonies (which can occur as often as weekly on some bases) also account for a significant amount of base-generated room-night demand.

Ample demand from the federal government can heavily influence average rates in a hotel market because government guests book at a discounted per-diem rate. Government per-diem allowances affect hotels in several ways, most prominently by serving as the basis for rack rates and overall average rate in the market. Hence, an increase in per diem is generally considered as a positive for hoteliers, though it can also result in a loss of business for some economy and mid-tier hotels, as a sufficient raise in per diem can create the opportunity for government guests to move up to more upscale lodging. This is exactly what happened in Charleston, South Carolina, where prior to 2008, the military predominantly utilized midscale hotels in keeping with its sub-$100 per diem; however, after a significant increase in the per-diem allowance in 2008, military demand shifted to upper-midscale and upscale chains.

The chart below shows historical and current per-diem rates for select markets in the Southeast. 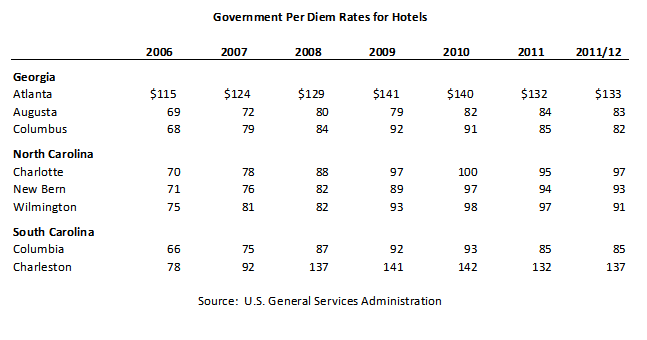 With the exception of Augusta, Georgia, all of the markets listed above experienced a decrease in per diems in 2011, making it more difficult for local hotels to increase their rates. On a positive note, rates for 2011/2012 show more stability, with a rising trend apparent in some markets. The government establishes per-diem rates in part on the strength of the national economy; with economic conditions improving nationwide, expectations point to a rise in per diem in the near future—welcome news for hoteliers in these military-centered markets.

BRAC was implemented in Georgia in the fall of 2011, resulting in a host of repercussions to hotel markets in the state. The closures of Fort McPherson and Fort Gillem have left a vacuum of government demand in southern Atlanta; although, the loss for Atlanta has been a boon for Columbus, where an influx of military personnel and operations has boosted the overall economy and the performance of local hotels. Columbus’s Fort Benning has the third-largest troop density of any base in the nation, supporting over 100,000 military personnel, family members, reserve component soldiers, retirees, and civilian employees. Local hoteliers report that 55 to 65 percent of their demand comes from the base, and with 30,000 new soldiers and civilians (including contractors), the conditions for hotel stakeholders have become much more favorable in Columbus.

Fort Gordon is Augusta, Georgia’s largest employer, delivering well over a billion dollars in economic impact to the Central Savannah River Area annually. Fort Gordon also contributes up to 70% of the area’s hotel demand. Other bases throughout Georgia, which collectively generate significant demand for local hotels, are listed on the map below. 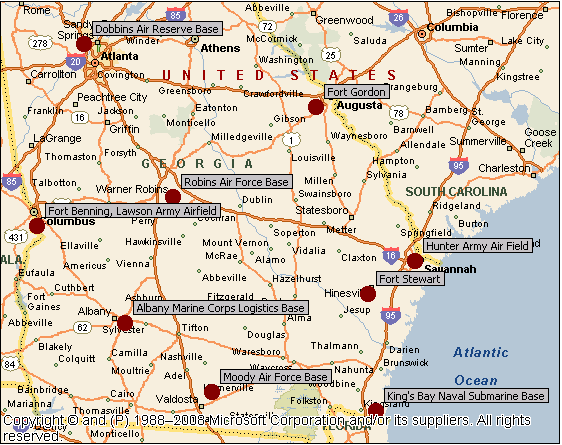 High levels of permanent and contract personnel at Fort Bragg and Pope Air Force Base make the military one of the top employers in Fayetteville, North Carolina. Fort Bragg, home to the 82nd Airborne Division, the Special Forces Operation, and the 18th Airborne Corps, is a major station and depot for troop movements to and from Afghanistan and Iraq, with units regularly deployed for multiple tours in combat zones overseas. BRAC has also brought a significant increase in civilian and military personnel to the base. Staff and soldiers from Fort McPherson—40,000 in all—relocated from Atlanta to Fort Bragg in September of 2011. Fort Bragg now houses approximately 10% of the entire U.S. Army and more four-star generals than any other base, garnering it the nickname “Pentagon South.”

The relocation is also bringing several new government contractors and prompting the expansion of many existing contract jobs in Fayetteville. Housing construction is underway on and near the base, with 210 homes approved for construction starting in the spring of 2012 and another 400 homes approved for major renovations. All this activity is expected to bring a rise in hotel demand in the coming years.

The map below pinpoints Fort Bragg, Camp Lejeune, and other sizable military bases in North Carolina. 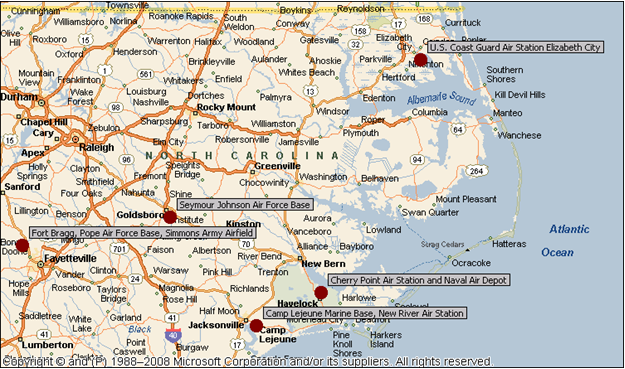 Charleston, South Carolina is home to Charleston Air Force Base and the Charleston Naval Weapons Station. The Naval Weapons Station supports more than 40 tenant commands and has a workforce of more than 11,000 military, civil service, and contract employees, remaining the largest employer in the Charleston metropolitan area. The Navy and Air Force are among the area’s top demand generators, particularly for North Charleston. Because of its diverse economic base, which is buttressed by tourism, education, health care, and technology, Charleston supports the highest per-diem rate among the markets listed in the chart above.

These private and government demand generators and economic pillars have made Charleston an example of how a city can successfully rebound and restructure following the closure of a major military base. The Charleston Naval Complex shut down in 1996, and more than 90 private, local, state, and federal entities have since leased or purchased property on the site, occupying 5.7 million square feet and creating over 5,400 jobs.

Occupancy in Sumter, South Carolina rocketed in 2010/11, despite new supply that entered the market in 2008/09. Increased activity at Shaw Air Force Base is primarily responsible for the rise. Shaw is home to the Air Force's largest combat F-16 wing and the 20th Fighter Wing. Tenants of the base include the headquarters for the Ninth Air Force, the U.S. Air Forces Central, and the Coalition Forces Land Component Command. In March of 2011, ground was broken on a $14.4-million, 49,880-square-foot facility that will consolidate operations and streamline communications for the U.S. Air Forces Central and the Ninth Air Force. Following BRAC, the U.S. Third Army also relocated from Atlanta to Sumter; the new $100-million headquarters for the command opened in May of 2011, bringing 1,200 officers, senior enlisted men and women, civilian workers, and contractors to Sumter.

South Carolina’s military bases are shown on the map below. 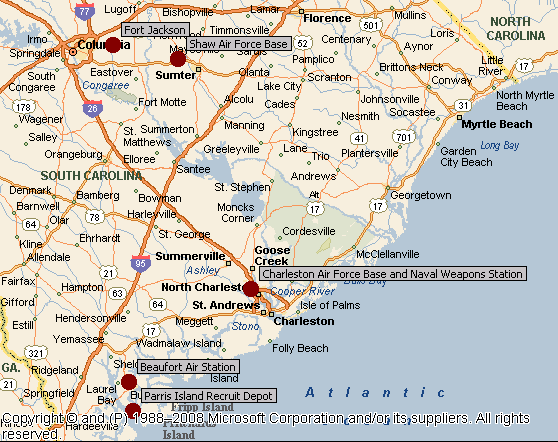 BRAC’s march through the southeastern United States has profoundly changed the makeup of many hotel markets. Those that saw bases close will have to adjust to the loss of government demand, while hotels in markets like Sumter and Fayetteville are looking forward to the prospect of increased demand from expanded military operations. Charleston stands out especially, having filled the void left by the closure of a major military base with lucrative private and public projects that have become new sources of business for area hotels. The growth trend exhibited by the most recent per-diem rates bodes well for these markets, and growth in the hotel industry, evidenced by new builds in Fayetteville, North Charleston, and Sumter, shows that additional boots on the ground can mean more heads in beds.