Asheville’s hotel industry, as shown by increases in rooms sales and new hotel supply, is rapidly escaping the drag of the recent recession.

Asheville’s cultural and commercial diversity almost defies description. The city exudes both the literal and metaphorical senses of “rich,” melding a thriving culture of creative youth, successful businesspeople, spirited retirees, and millions of curious travelers together in this modern and historic, urban and mountainous expanse of western North Carolina. For hoteliers, Asheville’s diversity and continual growth means a strong, and once again growing, stream of first-time and repeat visitors looking to book hotel rooms.

Some 2.76 million leisure travelers visit the greater Asheville area each year, accounting for an economic impact of over $1.8 billion annually for Buncombe County. The Biltmore Estate and the surrounding Biltmore Village, encompassing the historic home and grounds of one of the world’s wealthiest industrialists, remains an enormous draw for visitors from around the world. Antler Hill Village, the latest addition to the 8,000-acre estate, opened in the spring of 2010. Located adjacent to the winery, the expansion features dining and shopping venues, an exhibition space, an outdoor adventure center, and a village green.

Historic Biltmore Village, located just outside the gates of the estate, houses locally owned shops, restaurants, and businesses that are neighbored by Williams-Sonoma, Coldwater Creek, Talbots, and other national retailers in a modern retail and office complex. The Grand Bohemian Hotel Asheville, part of Marriott’s Autograph Collection and the Kessler Collection, opened in Biltmore Village in the spring of 2009. The luxury hotel comprises two buildings inspired by the architectural and historical facets of the village. Ruth’s Chris Steakhouse also opened in Biltmore Village in December of 2011, providing an upscale dining complement to the neighboring Grand Bohemian.

Downtown's historic Pack Square recently underwent a $20-million transformation into Pack Square Park. The expanded 6.5-acre site is a permanent venue for downtown events and a gathering place for locals and tourists throughout the year. The site, which spans Pack Square, Reuter Terrace, and Roger McGuire Green, features original works of art, water features, a pavilion, and a veterans’ memorial.

The Tourism Product Development Fund (TPDF), which is funded by taxes on hotel occupancy in Buncombe County, provides financial assistance to major tourism projects, helping drive demand to local hotels. The TPDF has injected more than $14 million into 15 local community projects, most recently assisting with the Navitat Canopy Adventures, the Montford Park Players acting troupe, and the Smoky Mountain Adventure Center. The TPDF also awarded a grant to the City of Asheville to help fund future renovations to the Asheville Civic Center, now known as the U.S. Cellular Center Asheville. The center’s arena was renovated in early 2012 and renamed the ExploreAsheville.com Arena.

Lodging revenues in Buncombe County increased every year from 1996 through 2007, a trend largely driven by the steady flow of tourists into Asheville. Hotel room revenues declined in 2008 and 2009, concurrent with the downturn of the local and national economies. Revenues increased in 2010 as the economy began to improve and reached a historical high in 2011, with room sale totals 5.1% higher than the previous peak in 2007. The following chart shows the annual dollars and percent change for hotel rooms sold in Buncombe County from 1996 through 2011. 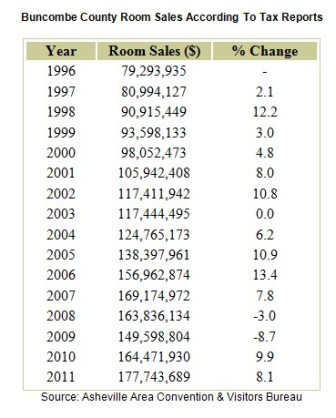 Budget-friendly limited-service properties, full-service hotels, and luxury resorts are among the hotel property types that make up Asheville’s hotel supply of some 6,000 rooms. The past three years have brought some notable changes to the ownership, supply, and presentation of hotels in Asheville.

KSL Capital Partners purchased the Grove Park Inn Resort & Spa (which features an 18-hole golf course and the world’s largest collection of furniture and lighting fixtures from the Arts and Crafts era) from Sammons Enterprises in May of 2012, for an undisclosed sum. Sammons Enterprises had owned the property since 1955. KSL Capital Partners is planning a $25-million renovation of the resort’s public spaces, guestrooms, restaurants, meeting space, and spa.

The European-style Inn on Biltmore Estate offers guests a luxury stay on the Biltmore grounds. The Inn’s spa was expanded and its guestrooms updated in 2009, followed by upgrades to the guestroom suites in 2010. Both the Crowne Plaza Resort and the Renaissance Asheville, the former situated in the mountains and the latter in the heart of Downtown, have undergone major renovations in the last several years. The Asheville Racquet Club – Downtown opened at the Crowne Plaza Resort in 2009, coinciding with improvements to the resort’s golf course and the opening of a 16,600-square-foot exposition center the same year; an 8,500-square-foot fitness center opened in 2010 and was expanded in 2011. Guestrooms at the Renaissance Asheville were renovated in 2009, and a multimillion-dollar renovation of the hotel’s public space was completed in early 2012, including the introduction of a new restaurant, Writer’s Bistro.

The demand for high-quality properties is evident when looking at lodging construction trends since 2009. The independent limited-service Brookstone Lodge opened in 2009 on the east side of the city, offering guests accommodations at an interstate exit that previously had no hotels. The Country Inn & Suites Asheville West also opened in 2009 at an interstate exit populated with much older hotel properties. As noted previously, the Grand Bohemian Hotel Asheville was a welcome addition to historic Biltmore Village in 2009. The 165-room Hilton Asheville Biltmore Park opened in August of 2009 in the Biltmore Park Town Square mixed-use development in south Asheville; the LEED Silver Certified hotel boasts one of the largest solar hot-water systems in the state. The Hotel Indigo Asheville opened in November of 2009 on the north end of Downtown. In addition to 100 guestrooms, this boutique select-service hotel features luxury condominiums for rent and for sale, with 16 new penthouse suites to be unveiled in late 2012. The newest addition to Downtown Asheville is the aloft Hotel Asheville Downtown, which opened in August of 2012. The select-service hotel features a city-funded parking garage, The Blackbird restaurant, and several retail spaces for lease.

Hotel room sales figures for 2011 show that tourism to Asheville has returned in full force. In 2011, visitor spending totaled $783 million in Buncombe County, an increase of 7.4% over 2010 levels. Tourism generates a payroll of more than $766 million for greater Asheville, where approximately 26,000 people work in tourism-related jobs. The centrality of the tourist trade in Asheville has traditionally secured an influx of demand for the city’s hotels, and the recent growth in and renovation of supply stands in testament to the confidence of hoteliers in Asheville’s viability in the years to come.

Asheville’s hotel industry, as shown by increases in rooms sales and new hotel supply, is rapidly escaping the drag of the recent recession. %%ViewCount%% Views 2 Comments
Share:
Subscribe To Newsletter