Colorado’s ski resorts draw millions of annual visitors. The lodging industry throughout the Colorado mountains comprises hotels and privately rented rooms and condos. How could a shift in this balance affect hotel performance in the years ahead?

The following HVS Market Intelligence Report explores hospitality markets in Colorado’s Eagle, Pitkin, Routt, San Miguel, and Summit Counties, which include internationally renowned ski resort areas such as Keystone, Breckenridge, Copper Mountain, Winter Park, Vail Resort, Beaver Creek, Aspen, Snowmass, Telluride, and Crested Butte. The majority of these markets in the Colorado High Country realized a very good start to 2013 compared to the prior year, a result of higher recent snowfall totals at the resorts; the 2011/2012 ski season was one of the worst snowfall seasons on record and resort visitation suffered.

Many of these lodging markets rely on both long-term and short-term booking segments. The long-term segment often stretches six to eighteen months in advance and primarily comprises out-of-state visitors planning summer and winter vacations; this clientele is more impacted by general economic conditions versus snowfall totals. Short-term bookings are typically made by in-state visitors and are booked anywhere from several weeks in advance to the day of arrival; short-term bookings are impacted very significantly by snowfall and other weather conditions. Overall, given the favorable snow, weather, and economic conditions, lodging markets across the Colorado Mountains are expected to realize a relatively strong year in 2013.

Overview of the Nationals & Colorado Ski Industry
Data on the 2011/12 ski season from the National Ski Areas Association (NSAA) and the Kottke National End of the Season Survey show skier visits in the U.S. down 15.8% compared with numbers from the prior winter ski season. The drop reflects the economic stagnation and low snowfall levels that affected skier visits nationwide this past season. The 2011/12 season was also marked by the lowest national average resort snowfall since 1991/92, the second‐lowest snowfall in 21 years of available data. According to the survey, 50% of responding ski areas opened late during the season, and 48% closed early. Every region experienced a decrease in overall days of operation, which resulted in an overall decline in skier visits. Significant declines in skier visits occurred in the Pacific Southwest, which was down 25.2%; the Southeast was down 23.9%; the Northeast was down 20.6%; and the Midwest was down 18.3%. More modest declines in total skier visits were experienced in the Rocky Mountain and Pacific Northwest regions, which decreased by 8.5% and 2.0%, respectively. 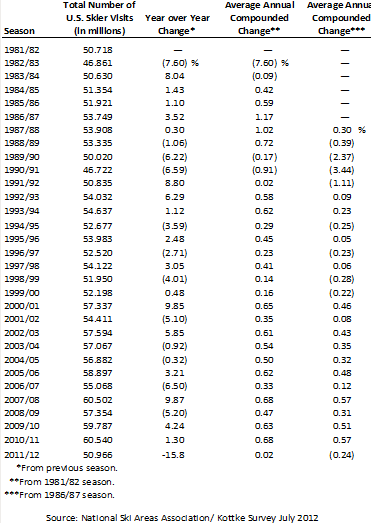 Total skier visits have remained relatively flat over the historical period, increasing at an average annual compounded rate of only 0.68% since 1981/82; however, dramatic changes have occurred in skier visits on a year-to-year basis, ranging from decreases as large as 7.6% in the 1982/83 season to increases as large as 9.87% in the 2007/08 season. National skier visit counts are likely to continue to bracket the 60-million mark in the near future given the factors cited above and the absence of a cohesive and cooperative strategy to increase visitation levels on a national basis.

Colorado typically ranks as the top state in the nation for total skier visits by a significant margin. According to NSAA data, Colorado’s 30 ski resorts captured 11,031,409 skier visits in 2011/12, a 10.5% decline compared with the 12,322,903 skier visits in 2010/11. Overall, Colorado’s ski industry generates more than $1.5 billion in revenues per year, with the average ski trip consisting of 4.5 nights at a hotel or other type of lodging facility.

The following table details skier visitation levels to Colorado since the 2002/03 season. 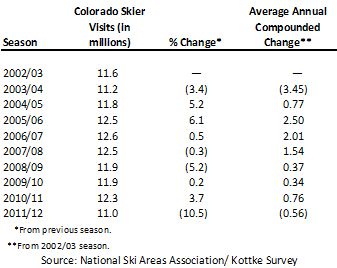 Aside from fluctuations caused by economic and weather conditions, overall visitor counts range between a low of 11 million to a high of 12.6 million skier visits, putting Colorado’s ski resort markets ahead of others in the nation in terms of total annual visitation.

According to HVS research, ten new hotels are in the pipeline across the Colorado Mountains; however, many of these are in the earliest stages of development. Most represent a mix of hotel, condominium, and timeshare units and often include a retail component as well. The locations of the proposed hotels include the following markets:

While many new hotels are expected to enter the market in the coming years, the percentage increase to the overall market supply will be minimal.

HVS notes that increased use of and improvements to online reservations systems and condominium/vacation home rental programs have notably influenced the dynamics of ski resort lodging markets in Colorado; apps for smart phones and tablets have also been a factor in increasing access to lodging options. Together with more ownership control and centralized reservations systems, the use of these programs has increased in recent years. This has brought a wider range of non-traditional lodging options such as privately owned condominiums and homes into the inventory of markets traditionally dominated by hotels, making these marketplaces more competitive. Online reservations systems have also encouraged more short-term bookings, as weekend visitors can book accommodations online at very short notice versus having to send a check and await confirmation.

Outlook on Market Occupancy and Average Rate
Long-term bookings are often made months in advance, with stays comprising at least a week. The booking patterns of this long-term segment are heavily dependent on the strength of the economy, with resorts and surrounding communities realizing growth from this segment in healthy economic times. For the short-term segment, weather patterns make a more direct impact; if a particular area or resort is seeing substantial snowfall, short-term bookings typically pick up. Some crossover remains, such as when resorts attempt to counter a poor snow year with incentives and deals the following year to help increase bookings; similar attempts ensued following the onset of the recent recession, which brought a decrease in discretionary spending that discouraged local skiers wary of paying for the gas, lodging, and food costs associated with a weekend trip.

The following table details the lodging performance of resort markets in Colorado with reference to annualized data on ski visits.

Occupancy and average rate both realized strong performance in 2012, following two years of occupancy growth but minimal movement in rates. This was the result of an improving economy and an overall better start to the 2012/13 ski season; the strong demand allowed operators to realize average rate growth of 6.4%. The outlook for 2013 is optimistic, as the favorable skiing conditions that started the season have continued into the most recent months. Furthermore, many resorts have recently added attractions to help boost visitation during the summer and “mud-seasons,” which extend from mid-April to late May (Memorial Day) and again from September (after Labor Day) through the Thanksgiving holiday and the opening of ski season in November. This activity should result in continued improvement in market RevPAR.

Recent Hotel Transactions
Hotel transactions that have occurred near major ski resorts in the western U.S. over the last ten years are summarized in the following table. 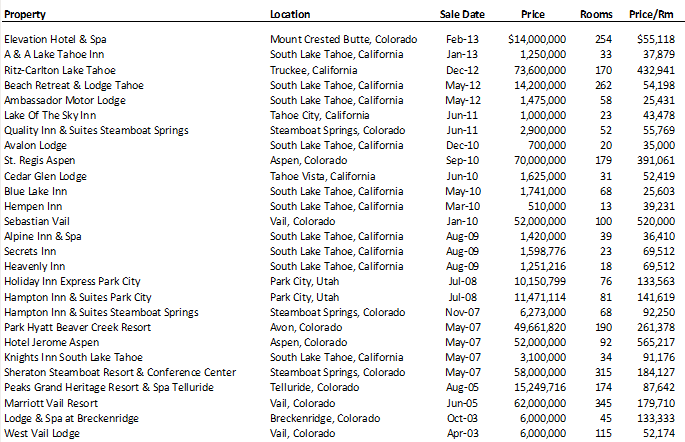 Sales of lodging assets in these markets over the past decade extend over a wide range of property types and prices per room. The Hotel Jerome in Aspen achieved the highest price per room when it sold in 2007, followed closely by the Sebastian Hotel in Vail in 2010.

Brokers’ Outlook
HVS interviewed several brokers active in hotel transactions and developments in the Colorado Mountains. While activity has been slow on hotel properties located in the resort areas, interest has begun to increase with respect to the availability of land, as well as in the resale of existing condominium units. In general, most of the hotel transactions or listings are occurring in smaller mountain towns that are not necessarily associated with the ski industry, such as those markets capturing commercial demand from the oil and gas industry. Overall, brokers report that cap rates in the oil and gas-driven areas of the western slope of Colorado range from 8% to 11%. The cap rates associated with the more upscale properties near the ski resorts range from 5% to 8%, depending on the specific market and lodging product.

Conclusion
Resort markets across the Colorado Mountains are in midst of recovery after experiencing both economic and weather-related hindrances to growth. Hotels and lodging assets in most of the markets are in their second or third year of RevPAR growth, fueled chiefly by an earlier increase in demand. Average rates in most of these markets are rising; this trend is expected to continue, with markets realizing modest demand growth, and hotels and resorts continuing to command higher rates. The absence of any immediate new supply in the short term should help sustain this growth for an additional one to two years, poising hotels and resorts in the Colorado Mountains for relatively strong performance over the near term.

Colorado’s ski resorts draw millions of annual visitors. The lodging industry throughout the Colorado mountains comprises hotels and privately rented rooms and condos. How could a shift in this balance affect hotel performance in the years ahead? %%ViewCount%% Views Comments
Share:
Subscribe To Newsletter