On July 8, 2008, San Miguel de Allende was declared a World Heritage Site by the United Nations Educational, Scientific, and Cultural Organization (UNESCO). But even before receiving this international recognition, San Miguel de Allende’s narrow cobblestone streets, friendly residents, and laid-back lifestyle had been drawing tourists and new denizens for decades. The town serves as a model for how to leverage elements of history, architecture, and culture to positively impact a market’s lodging and real estate dynamics. It’s a model well-suited to other towns looking to secure a place on Mexico’s list of premier alternative destinations.

San Miguel de Allende’s tourism board spent an estimated $10 million on promotional marketing to domestic and international visitors. Based on this marketing push and the diversity of the area’s appeal, the number of visitors is expected to continue increasing in the near term. The San Miguel de Allende market is somewhat resistant to the ill-effects of the present economy, largely because of its limited rooms supply and the healthy domestic demand generated from nearby Mexico City, where the effects of the global economic downturn have been relatively recent and mild. The favorable exchange rate for international travelers to Mexico has also aided in stabilizing demand for this market.

A Haven for Expats

American and Canadian retirees have been moving to San Miguel de Allende since the 1930s. In the 1940s, American veterans discovered that their GI bills went further at U.S.-accredited schools throughout Mexico, including those in San Miguel. In 1948, the Life magazine article "GI Paradise: Veterans go to Mexico to study art, live cheaply, and have a good time" brought San Miguel de Allende further into the spotlight. According to the local tourism office, the municipality of Allende now has some 140,000 residents, of which approximately 12,000 are foreign-born. San Miguel de Allende has also been designated a Pueblo Mágico, or "magical town," an official award issued by Mexico's Secretariat of Tourism (SECTUR) to select towns whose natural beauty, cultural riches, or historical relevance provide visitors with a "magical" experience.

San Miguel de Allende's infrastructure of centuries-old Spanish colonial buildings, winding alleyways, and a variety of local businesses caters to the young and the old, the native and the foreigner. Superb restaurants, upbeat and relaxed bars and lounges, boutique hotels, multiple art galleries, Spanish and English schools, cooking schools, art schools, and La Biblioteca, a highly frequented bilingual library, are all close at hand. San Miguel's central square, known as El Jardín ("The Garden"), is towered over by the elegant pink spires of La Parroquia, the town's basilica. The square draws residents and visitors to the shade of its many laurel trees, where they may relax, listen to musicians, or cheer one of the town's frequent parades. 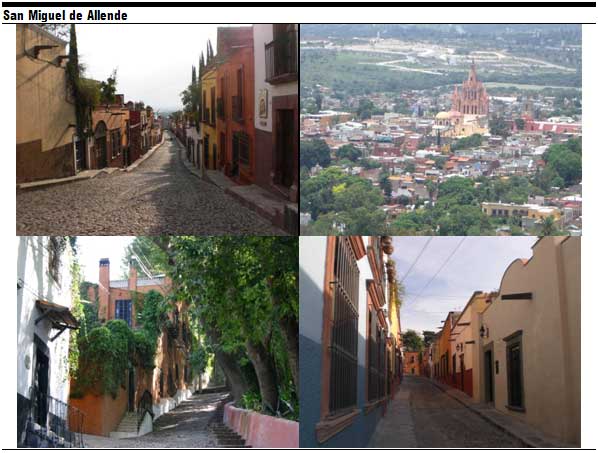 San Miguel de Allende is arguably one of the most sought-after small towns for retirees in Mexico. It's a place where the lives of nationals and expatriates intertwine, where English is heard as much as Spanish, and where foreigners have established schools, founded socially responsible organizations, and opened profitable businesses that support the community. This healthy mix of cultures has become part of the town's modern character, something to which visitors in need of lodging are increasingly drawn.

The lodging offering in San Miguel ranges widely, from inexpensive guesthouses and regionally branded hotels to expensive and luxurious boutiques. All hotels in San Miguel de Allende, with the exception of one, have less than 57 rooms, and most have far fewer. The market currently has only one internationally branded hotel, the Orient-Express Casa de Sierra Nevada, whose estimated 2007 average rate was $305—the highest in the market. The Casa de Sierra Nevada comprises a collection of nine colonial houses, wherein the guestrooms and other facilities are located. Six additional guestrooms are currently under construction, and 24 more, along with a full-service spa, are proposed for this property for 2010.

While the rooms supply tracked by DataTur has changed very little over the last few years, local tourism officials report a growing number of private guesthouses or villas available for rental. These alternative lodging options boost the rooms supply by an estimated 1,500 units. Private investors and well-known hotel companies have also started searching for a niche in the market. The Rosewood Artesana, for example, under construction near the city center, is expected to include 65 rooms and 20 private villas.

The local lodging scene's ability to command high average rates (in the range for $200 to $400 for the town's most exclusive facilities) illustrates the purchasing power of those who visit, often representing well-heeled Mexican urbanites and adventurous international travelers seeking a genuine, but comfortable, experience. Rates have remained strong even through the downward economic trend that began to take hold in late 2008 and continues into 2009. The town's seasonality often drives average rates upward, particularly during special holidays or during the weekends. San Miguel's focus on leisure demand also poses a challenge during weekdays, when demand levels drop, resulting in reduced hotel occupancy levels. Most hotels in San Miguel de Allende offer limited or no meeting space, and the limited room counts at each are not conducive to large groups.

With an overall market-wide occupancy level of approximately 50%, San Miguel de Allende's opportunity for growth depends on an ability to attract corporate meetings, incentive groups, and social groups, which would help especially to offset the low occupancy levels experienced during the weekdays. A wider product spectrum, ranging from group-oriented full-service properties to upscale branded hotels like the Rosewood Artesana, is crucial in attracting a range of travelers beyond those catered to by the boutique-property set. Amenities such as golf courses (one is currently under construction in the area) can bring over travelers otherwise on the fence about a visit and extend the lengths of stays, resulting in a lower gap between the high season and the low season or between weekends and weekdays. Developers in locales like San Miguel de Allende need to be sensitive to what the uniqueness of their destination enables them to promote, striving to provide a product and experience that merges with the area's culture, traditions, and intrinsic allure.

Unlike Mexico's Caribbean and Pacific resort cities, San Miguel de Allende's residential product offering, like that of similar inland colonial towns, is often limited, with most communities offering a small set of amenities. As with the hotel sector, San Miguel de Allende's most expensive real estate can be found within or near the historic downtown district, where some colonial homes are priced upwards of one million US dollars, with an average price per square foot of $400 to $500 USD. Prices fall fast for real estate located away from the city center. This poses a challenge for real estate developers looking to command prices similar to those obtained Downtown, but opportunities exist for those willing to offer a range of amenities impossible to replicate in downtown homes. Take for example the Rosewood Artesana's 20 luxury villas, which are being built on the border of the historic downtown district. Though not as close to the city center as some other homes, this development features concierge services, secured access, discrete underground parking, and all of the amenities of an on-site, luxury Rosewood-branded hotel, including top-notch food and beverage outlets, recreational areas, and a spa.

While constrictive credit markets have slowed the growth of residential real estate in the last few months, long-term retirement trends are expected to provide a base for continuous growth in this segment in the future. Some towns in Mexico, including San Miguel de Allende, La Paz, and Chapala, have already become preferred hubs for retirees, and with millions of baby boomers expected to retire in the coming years, opportunities abound.

An expansion is also underway for Federal Highway 51, which connects San Miguel de Allende with the northern town of Dolores Hidalgo and the southern town of Celaya. Last but not least, the possibility exists for the creation of a private airport 30 minutes south of San Miguel de Allende, which, if realized, will be a key factor in attracting high-end travelers who often visit Mexico's most exclusive destinations by private plane. These initiatives all play a role in positioning the market for the future.

Since 2006, Travel+Leisure magazine has ranked San Miguel de Allende third in its list of "Top Five Cities in Mexico, Central, and South America."1 But it's important to note that San Miguel de Allende was not always on this list. Over the years, careful planning by government entities and visionary residents has allowed San Miguel de Allende to grow without sacrificing the landmarks, character, ideals, and sense of community that visitors admire. New lodging brands, golf courses, residential communities, and area infrastructure are setting the stage for the San Miguel de Allende of tomorrow. Challenges remain, particularly in this conservative economic climate, but this unassuming town provides a remarkable example of how other locales rich in history, culture, and architecture can promote these qualities to an ever-expanding generation of travelers.

HVS Mexico City performs appraisals of hotels and resorts in markets across Mexico, Central America, and the Caribbean. Please visit us at http://www.hvs.com/Offices/Mexico to learn more.

Luigi Major, MAI, is Managing Director of HVS Americas. Luigi earned his bachelor's degree from the University of Houston's Conrad N. Hilton College of Global Hospitality Leadership and joined HVS in 2007. Luigi focuses on consulting, valuation, and advisory for hotels. Contact Luigi at (310) 270-3240, or [email protected].