Following the performance detour brought on by the recent recession, Ann Arbor hoteliers are beginning to see things shift in the right direction.

A classic American college town, Ann Arbor, Michigan’s economic engine cranks round on several powerful gears. In fact, Ann Arbor’s economy is faring better in many ways than those of similar cities around the U.S., and the potential for acceleration into a full economic recovery over the next several years is becoming more apparent. The following article provides an overview of Ann Arbor’s strengths and challenges with respect to its economic foundation and lodging industry.

The University of Michigan
The University of Michigan (U of M) is the cultural and economic heart of Ann Arbor, driving everything from education to commerce in the greater Ann Arbor area. A body of 40,000 undergraduate and postsecondary students makes U of M one of the top-25 largest public colleges in the country, with world-renown academic programs in engineering, business, and law. The university is also Ann Arbor’s largest employer, and an annual research budget of $800 million and an endowment of over $6.5 billion are two more figures that testify to the university’s solid foundation. In 2009, U of M completed a new 270,000-square-foot facility for the Stephen M. Ross School of Business, and a 100,000-square-foot addition to the school’s historic Law Quadrangle is on the books for completion in 2012.

Internationally regarded programs and a sizable student body draw guests to local hotels for annual events like commencement, graduation, and many in between. Of particular prominence is U of M football, with Ann Arbor and the university laying claim to the largest American football stadium in the world. Michigan Stadium (capacity: 109,901) underwent a $226-million expansion in 2010 and continues to draw thousands upon thousands of visitors during the September through November college football season.

Health Care
Ann Arbor’s healthcare sector has grown significantly over the past decade. U of M acquired Pfizer’s vacant 170-acre facility in 2008, with plans in place to expand the university’s current research operations and promote the space and facilities to private companies to foster public-private research and development opportunities. The University of Michigan Health System, recognized as a leader in both research and patient care nationwide, invested approximately $470 million from 2003 through 2006 in new facilities for a Life Sciences Institute. By November of 2011, construction is scheduled to be complete on a new $754-million, state-of-the-art medical facility at the University of Michigan Hospital. The C.S. Mott Children’s Hospital and Von Voigtlander Women’s Hospital will comprise over 1.1 million square feet and are expected to create 600 new full-time positions once operational.

Corporate Presence
A large educated labor pool serves as one attraction for major corporations and Fortune 500 companies, many of which have headquarters in the Ann Arbor MSA. The leading private employers in the area come from the auto industry and include international and domestic automakers such as Toyota, Hyundai, and Ford. The local economy also boasts a strong and growing technology sector, with Google establishing the headquarters for its AdWords operation—the mega-company’s most fluent revenue stream—in Ann Arbor in 2007.

The following figure lists the largest employers in Ann Arbor. 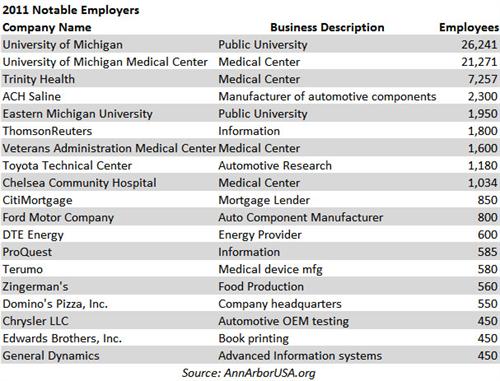 Ann Arbor Hotels
Most of Ann Arbor’s hotels belong to the limited-service category. This abundance of limited-service hotels is appropriate given the demand generated by the area’s transient base, which consists of travelers such as professors, guest lecturers, tradespeople, families, alumni, and recruiters. A smaller number of full- and select-service hotels cater to the needs of corporate visitors to Ann Arbor; these hotels also host higher-rated leisure and group travelers throughout the year.

Ann Arbor’s lodging landscape comprises more than 3,500 rooms at some 30 hotels and motels, many representing top hotel brands including Hilton, Marriott, Choice, and Wyndham. A major recent development was the purchase and repositioning of the former Four Points by Sheraton on the south side of the city off of Interstate 94. Columbus, Ohio-based Rockbridge Capital purchased the 197-room full-service hotel in July of 2010 for a reported price of $11 million. Following an extensive $8.5-million renovation, the hotel was rebranded and began operations as a Sheraton in May of 2011. A Hampton Inn on the city’s west side has been under construction for more than a year, though it’s unclear at present when this hotel can be expected to open.

Ann Arbor’s constitution of diverse commercial and educational entities has shielded the city’s economy from the ingress of the recent recession, especially compared to other auto-industry-dependent markets in Michigan and the Midwest. This is something reflected in the performance trends for the city’s hotels, which have displayed some resilience since the economy plummeted in 2008/09. Reported declines in average rate and occupancy were modest in 2009, with slow growth resuming in 2010 and continuing into 2011.

Wrap Up
Citing fluctuating unemployment figures for the state, Michigan Governor Rick Snyder recently acknowledged that as “the national economy and the world economy have become more difficult, there’s been some backsliding [in Michigan],” 1but added that the state stands “a whole point better” 2 than a year before. The strength and stability of the University of Michigan has partially immunized Ann Arbor’s economy to the ravages of the recession. A diverse set of corporate employers and operations also injects energy into the city’s economy and is generating demand for local hotels. More development projects set to be completed over the next few years would positively align with the expansion of research and development, commercial, and leisure interests in the city, especially if the national economy regains thrust, a good sign over the long run for local hotels.

Following the performance detour brought on by the recent recession, Ann Arbor hoteliers are beginning to see things shift in the right direction. %%ViewCount%% Views 2 Comments
Share:
Subscribe To Newsletter