A diversity of businesses, government agencies, entertainment venues, historical attractions, and universities characterize Austin as the cultural and political heart of Texas. As part of the greater Southeast Texas economic base, Austin's resilient economy remained one of the strongest among major cities nationwide during the recent recession, and growth throughout the city has outpaced that of Dallas, Houston, and San Antonio. Austin also remains one of the premier corporate-relocation sites in the country. These features have supported strong growth in Austin’s hotel industry over the past few years. 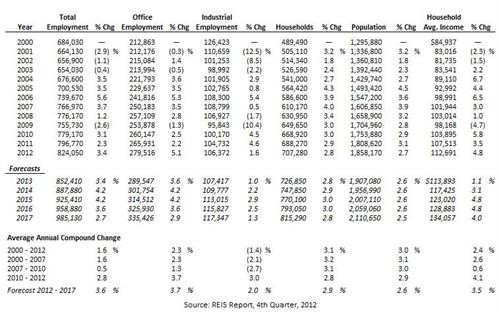 The following table lists unemployment rates for Austin, the MSA, the state of Texas, and the U.S. from 2003 through 2012. 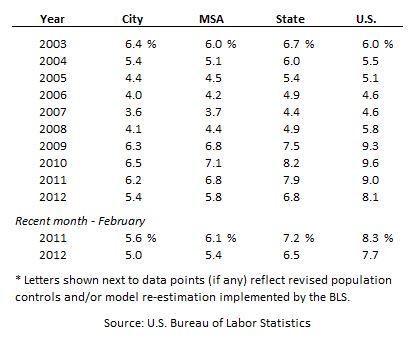 Unemployment in Austin remained low from 2004 through 2008 as the technology industry recovered following a difficult period earlier in the decade. However, Austin was not immune to the global recession, as illustrated by the inflated unemployment rates from 2009 through 2011, although unemployment in the city was considerably lower than state and national levels during that time. The local unemployment rate has realized substantial improvement since 2011, with corporate relocations and expansions at high-technology firms bolstering job growth in the city. In addition to significant new jobs created by the plethora of high-technology firms in Austin, Apple's new campus is expected to bring more than 3,000 new jobs to the city by 2025.

Austin’s economic health has always been strong, primarily due to the presence of the State Capitol Complex and The University of Texas. Many of the corporations or institutions that support the area, including Dell, IBM, eBay, Apple, National Instruments, and Facebook, are world-renowned companies working with a multitude of clients. The market has benefited from new retail, hotel, residential, and office space construction in the last several years, and similar projects continue throughout the city. The area benefits from a diverse economy and, as such, has remained somewhat sheltered from any major economic interruptions.

The Austin CBD commands the highest average asking lease rate in the market, with the second-lowest vacancy rate, a sign of this submarket’s stability given its relatively large proportion of Austin’s overall 40.2 million square feet of available office space. More than 90% of the Southeast submarket’s office space was occupied as of the fourth quarter of 2012, though this submarket also has the lowest lease rate for the overall Austin market. The following table illustrates historical and projected office space statistics across Austin. 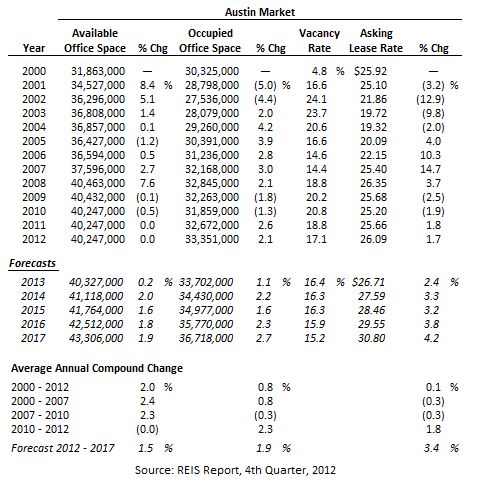 The construction pipeline in Austin is large, with a diverse array of developments having recently opened, under construction, or in the final stages of planning. The 137-room Hampton Inn Downtown/University opened in October of 2012, and the 296-room Hyatt Place Downtown opened in March of 2013. Major proposed hotel projects in Austin include the following:

Numerous smaller hotel projects are underway throughout the Austin area as well, most notably in the Lakeway/Bee Cave area and the northern portion of the city. While many new hotels are expected to enter the market in the coming years, especially in the Central Business District (CBD), Austin’s commercial firms, high-tech companies, leisure attractions, and sheer volume of special events are anticipated to result in a rather rapid absorption of the new supply.

Given the depth and breadth of economic anchors in the market, as well as the city’s numerous leisure attractions, activities, and special events, demand is expected to continue to grow in the coming years. The opening of the Circuit of the Americas (COTA) Formula 1 racetrack in November of 2012 has already bolstered Austin’s international profile, as the majority of events held at the track are global in nature. Occupancy in the CBD has risen to around 80% since the end of the recent recession. The market’s substantial amount of unaccommodated demand should go far in absorbing the influx of new supply expected in the next few years; the openings of the Fairmont and JW Marriott convention hotels are anticipated to bring additional demand, as the Austin Convention Center currently operates at only 60% capacity due to a lack of hotel room availability for large conventions and events. Ultimately, the city is expected to continue to realize healthy occupancy levels in the coming years.

Robust demand in the city, especially during high demand periods such as citywide conventions, the SXSW music festival, and international events held at COTA, has resulted in historic highs in average rates. While discounting among new hotels that enter the market may curtail the rapid rate growth currently occurring in the city over the near term, the substantial amount of high-rated supply expected to enter the market should result in healthy rate growth over the long term.

The following table summarizes hotel transactions in the Austin area since June of 2010.

The bullish sales market for hotels in Austin in the latter half of 2010 is indicative of investor confidence in the market, especially given the relatively limited number of hotel transactions in many other U.S. metro markets that year. From September of 2011 to March of 2013, HVS recorded eight hotel transactions in Austin compared with a total of 24 in other markets across the entire state of Texas. Price-per-key in Austin also stood well above that for transactions in the rest of the state, even excluding the sale of The Driskill hotel, a trophy asset located in Austin’s CBD; the per-key price of The Driskill represented the third-highest sale in the U.S. outside of New York City, Boston, Miami’s South Beach, Washington, D.C., Los Angeles, and the California Coast.

The impact of the economic downturn was relatively minimal in the Austin area, which continued to benefit from corporate relocations and new commercial developments. Many of the area’s major employers are high-tech companies, which have noted recent growth as businesses worldwide have increasingly expanded capital budgets since emerging from the recession. The City's commitment to improving the Waller Creek corridor and the dedication of roughly $350 million to other infrastructure projects within the CBD are expected to boost economic activity and further increase the area's attractiveness. Additionally, the new Circuit of the Americas racetrack, which most recently hosted the MotoGP World Championship in April of 2013, is the first multi-purpose Grand Prix facility in the U.S. and should attract high visitation to Austin surrounding events throughout the year. Austin’s firmly entrenched economic anchors, the significant presence of the high-tech industry, and continued development throughout the city should continue to support growth in performance and supply for hotels in the market in the coming years.

Shannon Sampson is a Senior Vice President and oversees both the Austin and Houston offices for the firm. Shannon earned his bachelor's degree from The University of Texas Austin and has extensive experience in hotel operations and management. Shannon lives in Austin and works extensively in the Central and South Texas regions. Contact Shannon at (512) 626-9172, or [email protected].