The U.S. hotel industry is approaching a significant crossroads. In 2013, hotel valuation fundamentals signal a strong positive trend in transaction volume as well as in new hotel development. HVS Valuation experts acknowledge that hotel values peaked in 2006 but declined rapidly for the next three years. In 2010, the recovery began. Today, hotel values have returned to their 2006 levels and consequently, this has resulted in jump starting what will be a noteworthy boost in hotel transactions (Figure-1). 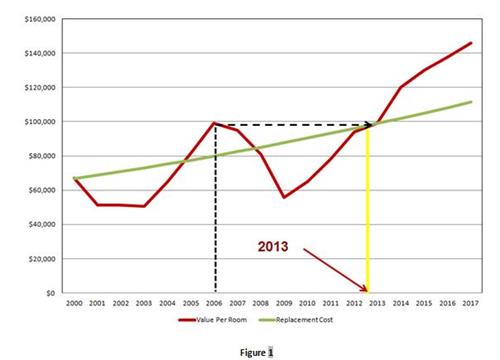 Where are we in this transaction cycle? What signs indicate a shift back toward positive values?
To date this year, U.S. hotel values have reached their 2006 peaks and, therefore, transaction activity is expected to escalate rapidly. In addition, hotel values have surpassed replacement cost in most sectors, making new development more feasible.

Value per Room
According to the HVS/STR Hotel Valuation Index, the 2006 value of $99,000 per room dropped precipitously by 50% during the following three years to $56,000 per room. During the 2010 to 2012 recovery years, values increased approximately 20% per annum, and we are projecting this value growth to continue at an average of 12% each year for the next three years (Figure-2).

In analyzing the 65 U.S. markets that we track, HVS is projecting that all of these markets will show positive value appreciation over the next four years (2012-2016). As mentioned, the biggest gains will be Miami, Oahu, New York, and San Francisco with the smallest gains showing in Tucson, Tallahassee, Albuquerque, and Norfolk.

Major Hotel Sale and Transaction
According to HVS data, we are witnessing an increase in major hotel sales transaction volume. Comparing year-to-date for 2013 with the same period in 2012, the number of major sales has doubled. In 2012, the total volume of major transactions was 184, which means that based on this year’s year-to-date data, total hotel transactions could easily exceed 300 (Figure-3). 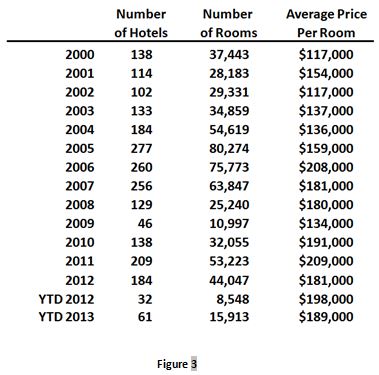 • Luxury Hotels (Ritz-Carlton, Four Seasons): The economy is becoming extremely favorable for developing luxury hotels. Values rose above to the replacement cost in 2013, and will go beyond the replacement cost beginning in 2014, thus creating an attractive environment to build or develop a luxury property (Figure-4). 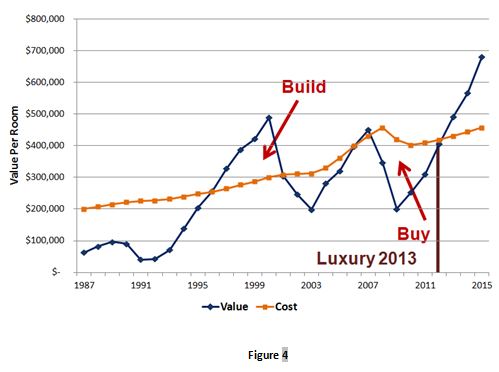 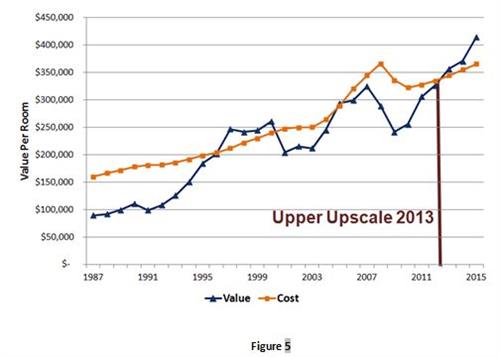 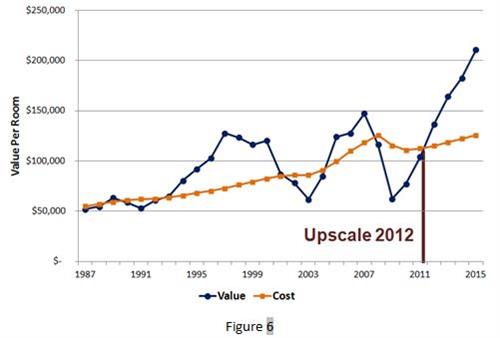 • Economy Hotel (Microtel, Motel 6): Replacement cost is currently higher than hotel values, and this situation is expected to last until 2015. This is an opportune time to buy an economy hotel instead of developing a new one. 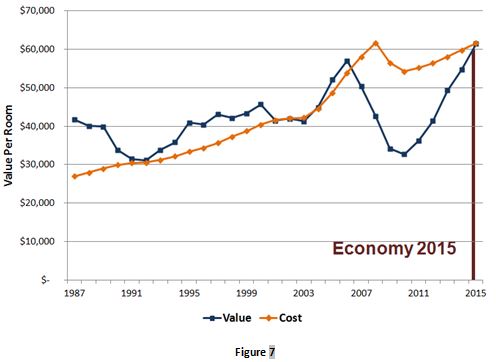 What should hotel buyers and sellers know?
After a lengthy recession, hotel values are coming back making it is an excellent time to sell your hotel at a profit. Other advantageous considerations guiding this advice include the fact that we are enjoying low mortgage interest rates capitalization rates (even with improved revenue and profits levels).

Sell your hotel
Transaction activity is expected to increase significantly as most owners can now realize a profit. To reiterate, hotel values have reached 2006 peaks! It is also suggested that for owners looking to extricate themselves from the market, it is a terrific environment to list your property for sale. There will be a substantial surge in transaction volume in the market during this timeframe. Furthermore, owners who financed hotels at the peak of the market have waited for values to rebound, and they are now able to pay off the mortgages at sale. One more prospective, underwater mortgages can now be refinanced fairly easily.

Neither interest rates nor cap rates will remain this low for very long which confirms our belief that it is a good time for owners to sell their properties. When interest rates and cap rates increase, hotel values will decrease.

Where should you buy, sell or build a hotel?
Based on recent market trends and according to our observations, the top four cities to buy hotels are Miami, West Palm Beach, Oahu and Tampa. The top four cities to hold or sell hotels are Washington D.C.; Rochester, NY; Tucson, AZ; and New Haven, CT. We recommend building hotels anywhere you can get construction financing.

Conclusion:
According to the research conducted by HVS with the support of STR, we reached the following conclusions:

For a copy of this presentation, which was shared at the 35th Annual NYU International Hospitality Industry Investment Conference, please visit www.hvs.com/nyu.

Steve Rushmore is the founder of HVS, a global hospitality consulting organization with more than 50 offices around the globe. He is focused on future office expansion and new product development outside the United States. Steve has provided consultation services for more than 15,000 hotels throughout the world during his 40-year career. For more information contact Steve at [email protected]

Is it a buyer’s market, a seller’s market, or simply time to develop? %%ViewCount%% Views Comments
Share:
Subscribe To Newsletter