Business, education, government, and expanding tourism and healthcare industries form the foundation of Baltimore’s economy. What should hoteliers have an eye on?

Compared with Mid-Atlantic sister cities such as Boston, New York, Philadelphia, and Washington, D.C., Baltimore’s pivotal role in America’s history—as well as its present—remains unsung. More than 300 years ago, the city was established as a major port of trade; today, its modern seaport is the second largest in the Mid-Atlantic. The city hosted a session of the Second Continental Congress, and it was from Baltimore that Francis Scott Key watched the historic battle of the War of 1812 that inspired the poem “Defense of Fort Henry,” which ultimately became the “Star-Spangled Banner.”
The Baltimore-Towson MSA comprises a rapidly expanding network of public and private entities. Tens of millions of tourists flock to Baltimore each year to visit the city’s historical attractions and neighborhoods, and some of the most prominent institutions of business and government have headquarters in the area. The following article takes a closer look at these economic forces, which also act as a wellspring for hotel demand. 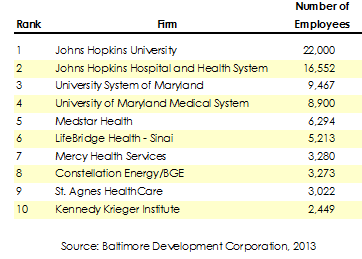 Finance, education, healthcare, government, and energy play major roles in Baltimore’s economy. Important entities and developments in each sector are described below.

Historical & Projected Employment, Households, Population, and Household Income
With the exception of heightened unemployment levels during the recent recession, the Baltimore market reflected annual decreases in unemployment over the last decade. Households and the overall population noted growth year-over-year, even through the economic downturn. Modest growth rates in employment, household size, and population are expected through 2017. Household average income is forecast to increase at higher annual rates as growth in more highly paid jobs continues.
The following table illustrates unemployment statistics for Baltimore, the Baltimore-Towson MSA, the state of Maryland, and the U.S. from 2003 through 2012. 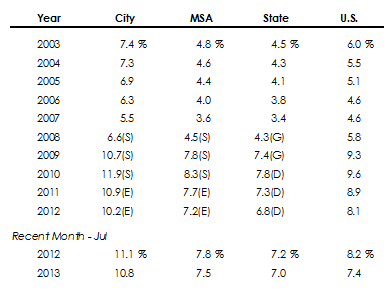 The most recent comparative period illustrates a modest decrease, per the latest available data for 2013, which can be attributed to resumed federal spending and steadier streams of government contract work. It should be noted that the City of Baltimore’s unemployment rate typically registers much higher than that of the MSA; nevertheless, local employment has remained strong within the healthcare and education sectors, particularly at Johns Hopkins University, the University of Maryland, and their healthcare affiliates.

The Baltimore office market experienced positive net absorption in the second quarter, and the vacancy rate decreased one percentage point from the prior year; however, excess office supply has kept vacancy rates, especially in Central Baltimore, relatively high. REIS expects Baltimore’s overall vacancy rate to close at 16.8% by year-end 2013, falling faster in future years as net absorption picks up.

Airport and Tourism
Passenger traffic at Baltimore/Washington International Thurgood Marshall Airport (BWI) has remained relatively stable over the last several years. Southwest, BWI's largest carrier, announced plans to join other carriers in increasing flights and locations serviced from the airport in the near future. A $100-million renovation of the airport’s central section includes enhanced concourse connections in 2013, and the State of Maryland announced a $125-million project to construct a connector between Concourses D and E, providing additional capacity for international service by the fall of 2016.
Leisure demand generated by Arundel Mills Mall, the Harbor Place waterfront, Downtown Baltimore attractions, and professional sporting events provides hotels with significant compression. A new Horseshoe Casino is scheduled to open in Baltimore in 2014 near M&T Bank Stadium. The $400-million project is expected to generate 1,700 jobs and attract sizable leisure demand upon opening. This could prompt the addition of a new hotel near the casino, as only one hotel exists nearby, the Holiday Inn Express Baltimore at the Stadiums.

Convention Center
A renovation of the Baltimore Convention Center (BCC) was completed in 2012, and the venue may undergo a 200,000- to 300,000-square-foot expansion in the future. In addition to the expansion, an 18,500-seat Inner Harbor arena and a 500-unit full-service hotel connected to the BCC would be developed on adjacent parcels; the proposed hotel would take the place of the existing Sheraton Inner Harbor on Charles Street. This project is still in the feasibility stage and is contingent on both private and public funds. City officials expect that the proposed expansion would be completed between 2016 and 2020.

The table below illustrates statistics for the BCC though 2012/13. 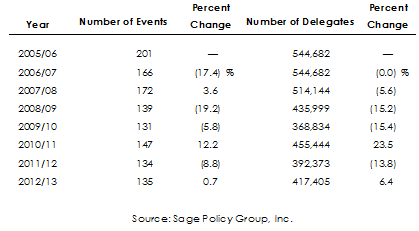 The number of events and delegates decreased in the 2011/12 fiscal year, following a promising rebound in 2010/11. The Baltimore Area Convention and Visitors Association (BACVA) has since ramped up efforts to increase convention bookings, partnering with the BCC and local hoteliers to increase production, streamline sales processes, and identify opportunities for future business.

New Hotel Supply Update
The Four Seasons Baltimore, the city’s most recent new hotel, opened in November of 2011. Hotel projects in the planning stages include the following:

Hotel projects anticipated but not begun include:

Outlook on Market Occupancy and Average Rate
The expansion of Baltimore’s corporations, healthcare systems, and government operations should drive additional hotel demand, especially as the economy continues to strengthen. Occupancy gains may be moderated, however, in areas of significant hotel supply growth. Average rate should rise as lodging demand increases; new high-quality supply should support further average rate growth for the city as a whole. 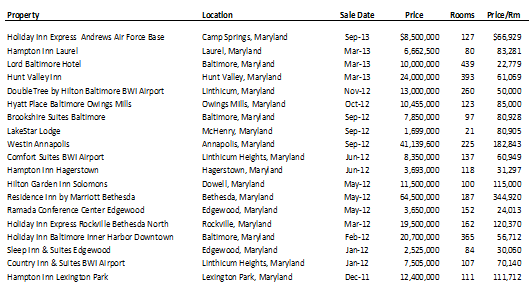 The most recent hotel transactions in the Baltimore area have been of the Lord Baltimore Hotel, the Brookshire Suites Baltimore, and the Holiday Inn Baltimore Inner Harbor Downtown. The Lord Baltimore Hotel operated as a Radisson at the time of sale but is planned to remain independent; the buyer, Miami-based Rubell Hotels, began renovations to the lobby and public areas following the sale, and guestroom renovations are expected to be completed by early 2014. The Brookshire Suites Baltimore was purchased by Modus Hotels in September of 2012 as a distressed asset. The Holiday Inn Baltimore Inner Harbor Downtown was distressed at the time of sale and will remain branded as a Holiday Inn and be managed by ownership.

Conclusion
The expansion of private- and public-sector entities, along with the city's tourism and convention base, should provide a strong platform for further economic and hotel performance growth. Some challenges remain, especially with respect to the progress of national economic recovery. While the duration of the federal government shutdown is unknown at the time of writing, its effects will likely prove detrimental to area businesses and hotels, which typically receive heavy patronage from the government demand segment. Overall, however, recent advances in employment and the promise of additional leisure demand help support an optimistic outlook for the Baltimore market in the coming years.

Business, education, government, and expanding tourism and healthcare industries form the foundation of Baltimore’s economy. What should hoteliers have an eye on? %%ViewCount%% Views 1 Comments
Share:
Subscribe To Newsletter