Each year, HVS researches development costs from our database of actual hotel construction budgets, industry reports, and franchise disclosure documents. These sources provide the basis for our range of component costs per room.

This 2015/16 survey reports per-room hotel development costs based on data compiled by HVS from hotel projects proposed or under construction during the 2015 calendar year. Construction cost data for new projects was collected in 2015 in order to form the basis of the mean and median of the construction cost components. Data derived from published sources and industry indexes, as well as information obtained from architects, contractors, developers, lenders, and other professionals involved with hotel development projects, have been considered in this survey.

The HVS Hotel Development Cost Survey sets forth ranges of development costs in each defined lodging product category. The survey is not meant to be a comparative tool to calculate changes from year to year—rather, it reflects the cost of building hotels across the United States in 2015. As will be discussed, the ranges and averages set forth in this survey are greatly affected by the types and locations of hotels being developed at this point in the development cycle.

HOTEL DEVELOPMENT ON THE RISE

In most U.S. markets, 2015 served as a banner year for hotel occupancy and average rate. In anticipation of record RevPAR figures and strong cash flows, hotel developers across the country have searched high and low for new opportunities. With the increasing availability of construction financing over the past few years, no major market in the United States is without an active development pipeline. With this sweet spot in the development cycle, new hotels have been opening and many more are under construction or in planning. Hotel development in some markets was previously hindered by the lack of available brands; however, options for development have expanded as many new brands affiliated with the top hotel companies have emerged. Shrinking AOPs (Areas of Protection for franchisees) and the push toward independent lifestyle hotels and soft brands has further widened the opportunities for new entries into the market.

With more options than ever before, hotel developers have been capitalizing on the favorable conditions. Most analysts agree that we are at the top of the cycle in terms of hotel performance, and the new supply pipeline is beginning to make up for a relatively long and low period in our industry’s history. While the number of rooms available in the U.S. has increased by 3.35% over the last five years, overall rooms sold has grown by approximately 17.60%, resulting in rising hotel occupancy and average rate levels that support the cost of new development.

Some markets, including Chicago, Miami, Denver, Nashville, New York City, and Seattle, are expected to record double-digit increases in new hotel rooms over the next three years. Other markets with less favorable economic growth or higher barriers to entry are anticipating more limited new supply growth. Furthermore, the rise of Airbnb in popularity cannot be ignored; thousands of overnight accommodations are being added to market supply through this and other residential sharing sites. Numerous markets are pushing legislation to tax and better track home-sharing/short-term rental platforms; however, many analysts agree that the full impact of the shared economy lodging sites has yet to be realized.

Influencing the potential of new hotel development is the availability and cost of hotel construction financing. According to the annual survey by the Mortgage Bankers Association, loan originations trended upward slightly, particularly in the fourth quarter of 2015, which is contrary to the trend thus far in 2016. Given the flattening of RevPAR growth, the capital markets have become leerier of hotel financing; some construction lenders are pulling out of the market, with others being more stringent in their loan underwriting. Loan-to-cost ratios have been lowered, increasing the amount of equity required, which is in turn slowing new development in 2016. In some markets, many projects without financing and entitlements in place are viewed as highly unlikely, with a more difficult lending environment on the horizon.

The competition for sites continues to intensify. In dense urban and suburban areas, multifamily housing and condominium projects can provide a more lucrative return than hotel development, particularly for well-located sites. However, as affordable housing requirements within high-density residential have gained favor in major urban markets, many developers are turning to alternative development types, including hotels.

The Uniform System of Accounts for the Lodging Industry (USALI) provides industry participants with a common language for analyzing the financial performance of a hotel. However, no such system exists for hotel development budgets. We have reviewed hundreds of hotel development budgets, and no two are alike. Evaluating the completeness of a budget is often challenging, as different line items are used and some components are unintentionally omitted. Based on our experience preparing the annual HVS Hotel Development Cost Survey, we have developed the following summary format for hotel development budgets, which forms the basis for our cost categories. We find that these categories are meaningful for hotel professionals when undertaking an analysis relating to hotel feasibility, and they provide a basis from which to analyze proposed projects.

The following chart shows the five categories defined by HVS and the typical items that each include. 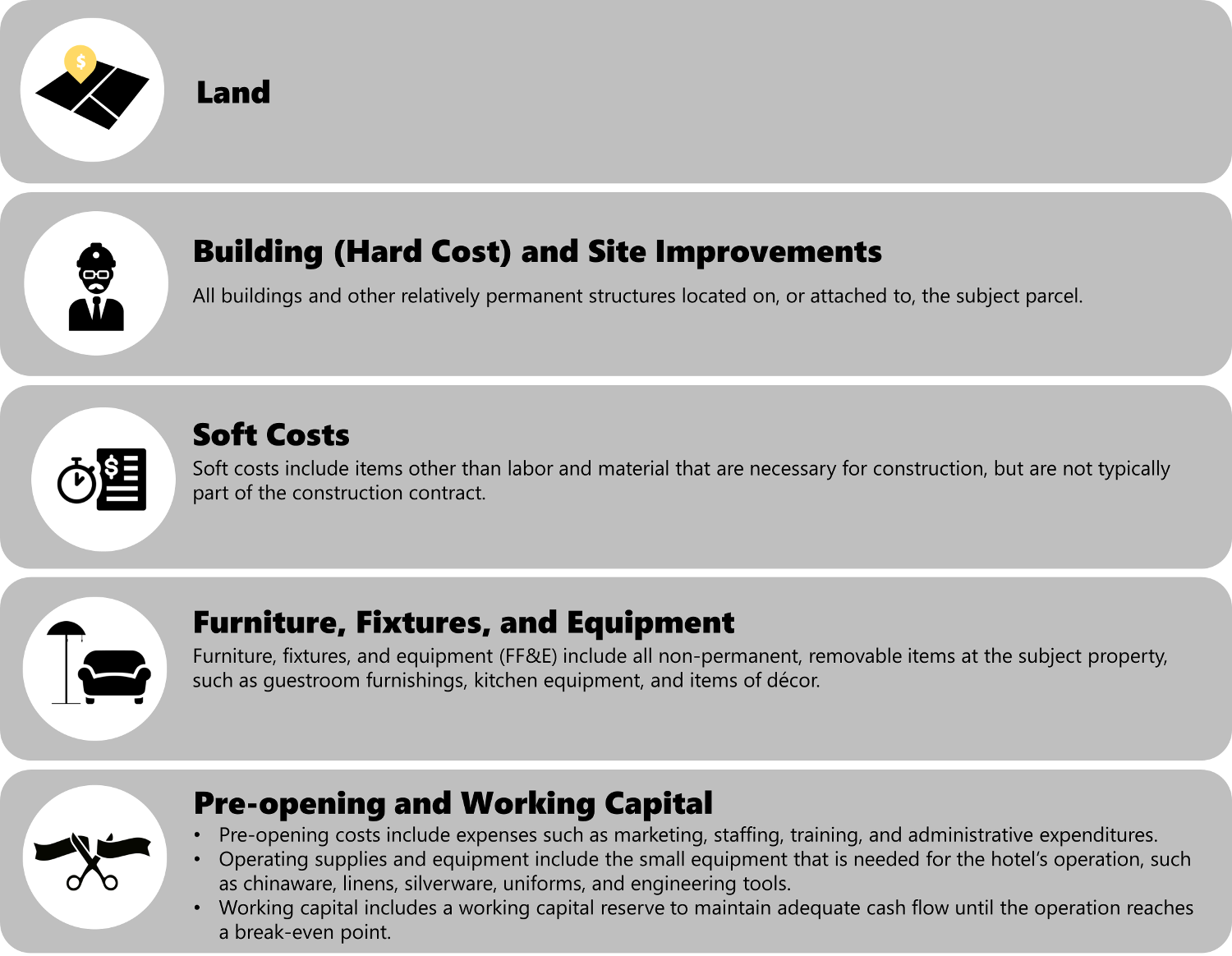 The categories are not meant to be all-encompassing but do reflect the typical items in a development budget. In construction accounting, development budgets are generally presented in far greater detail than for general investment analysis. For the purposes of considering the overall feasibility of a proposed hotel, we find that the HVS Hotel Development Cost Survey categories cover the major components of hotel construction costs.

It is important to note that our data collection and sample size varied somewhat in 2015, as compared to prior years’ surveys. In 2015, HVS collected more actual hotel construction budgets than ever before, spanning the country. The geographic breakdown of the data that form the basis for this year’s survey is shown below. 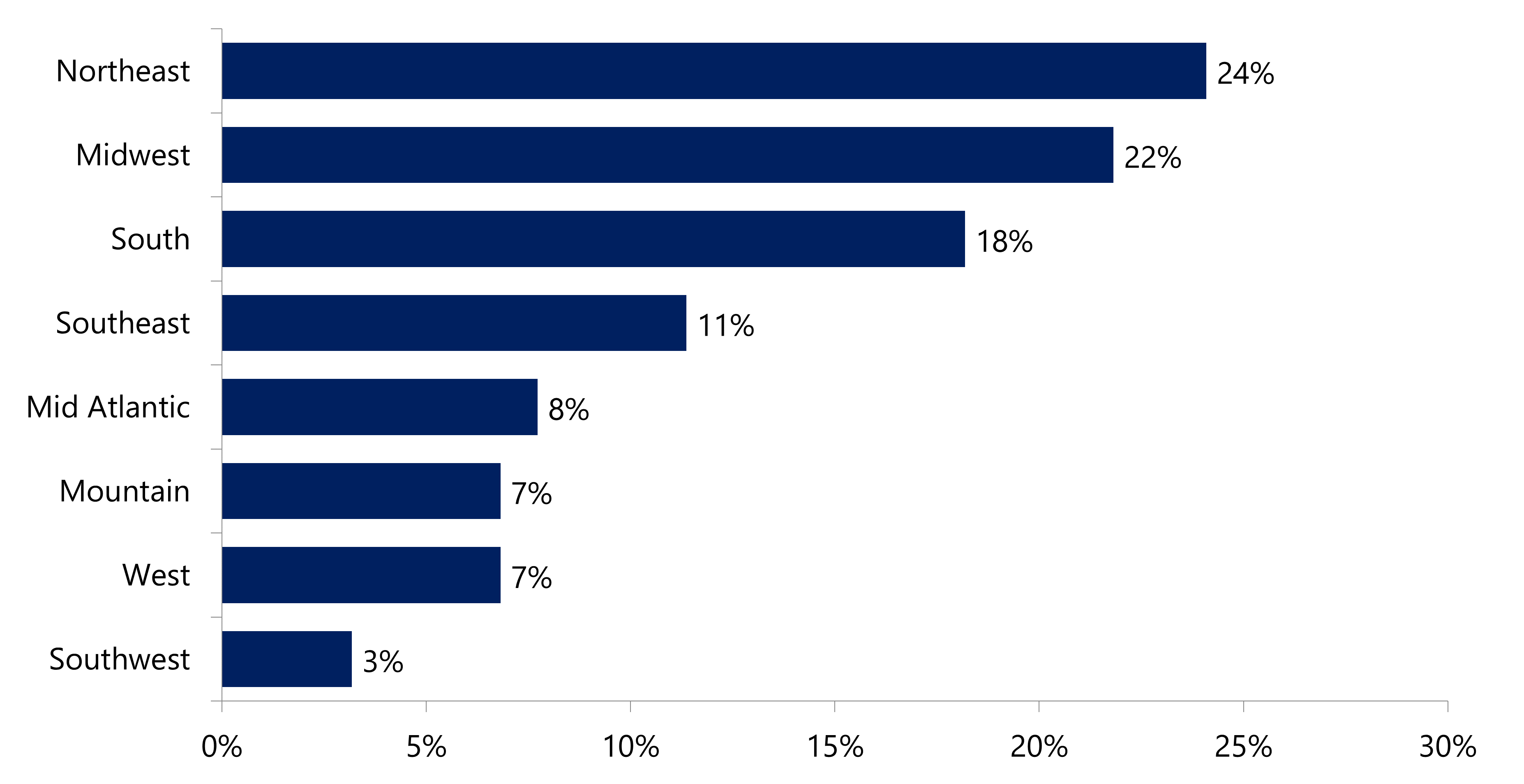 While not every construction budget was captured (due to a variety of reasons including incomplete data, skewed data, or development attributes), the construction budgets sampled span the United States. As identified by cost-estimating services like Marshall & Swift, construction costs vary greatly in different parts of the country. In this sample, our highest construction costs per key came from New York City and California. Other urban CBD markets, such as Chicago, Atlanta, and Dallas, reflected high costs as well. Conversely, the highway adjacent, rural, and mid-America suburban markets set the low data points.

Our sample included over 200 budgets. Of 3,000 hotel engagements conducted by HVS in 2015, approximately 20% were related to market and financial feasibility studies and/or appraisals of proposed hotels. Of these proposed projects, we selected over 200 complete and reliable budgets that form the basis for this year’s survey. We were also able to analyze the budgets of hotels where construction budgets had changed. We evaluated several hotel projects where the construction budgets were updated as the hotel’s development progressed. Of about 20 properties over a two-year period, the increase in construction cost grew on average 2.14% per month (25.7% annualized) from May 2014 to February 2016. For the projects at the low end of the range, they experienced an increase of 0.64% per month (7.7% annualized), while the highest was 6% per month. Two projects increased over 25%, each in less than a year’s time, primarily driven by an increase in hard construction cost and labor costs (both projects were located in union markets).

The data illustrate how quickly construction costs change, especially in a market where demand for construction materials and labor is very high. Urban markets with active development across all commercial real estate sectors are especially susceptible to these increases. When evaluating actual construction budgets, analysts are advised to request current estimates and frequent updates, as well as to ensure that proper contingencies are in place.

We also examined the lodging product tier (STR chain scale) breakdown of our data set against the national data from STR. According to STR, over 4,000 hotels are in the U.S. pipeline for opening over the next three years. Our sample (5% of the STR pipeline) is generally in line with the STR’s national figures for breakdown by chain scale. For the purposes of comparison, we re-sorted our data to fit the STR categories below. Historically, we did not account for the “Unaffiliated” segment; however, this segment is growing as the popularity of boutique and independent hotels rise and, thus, has been included this year. 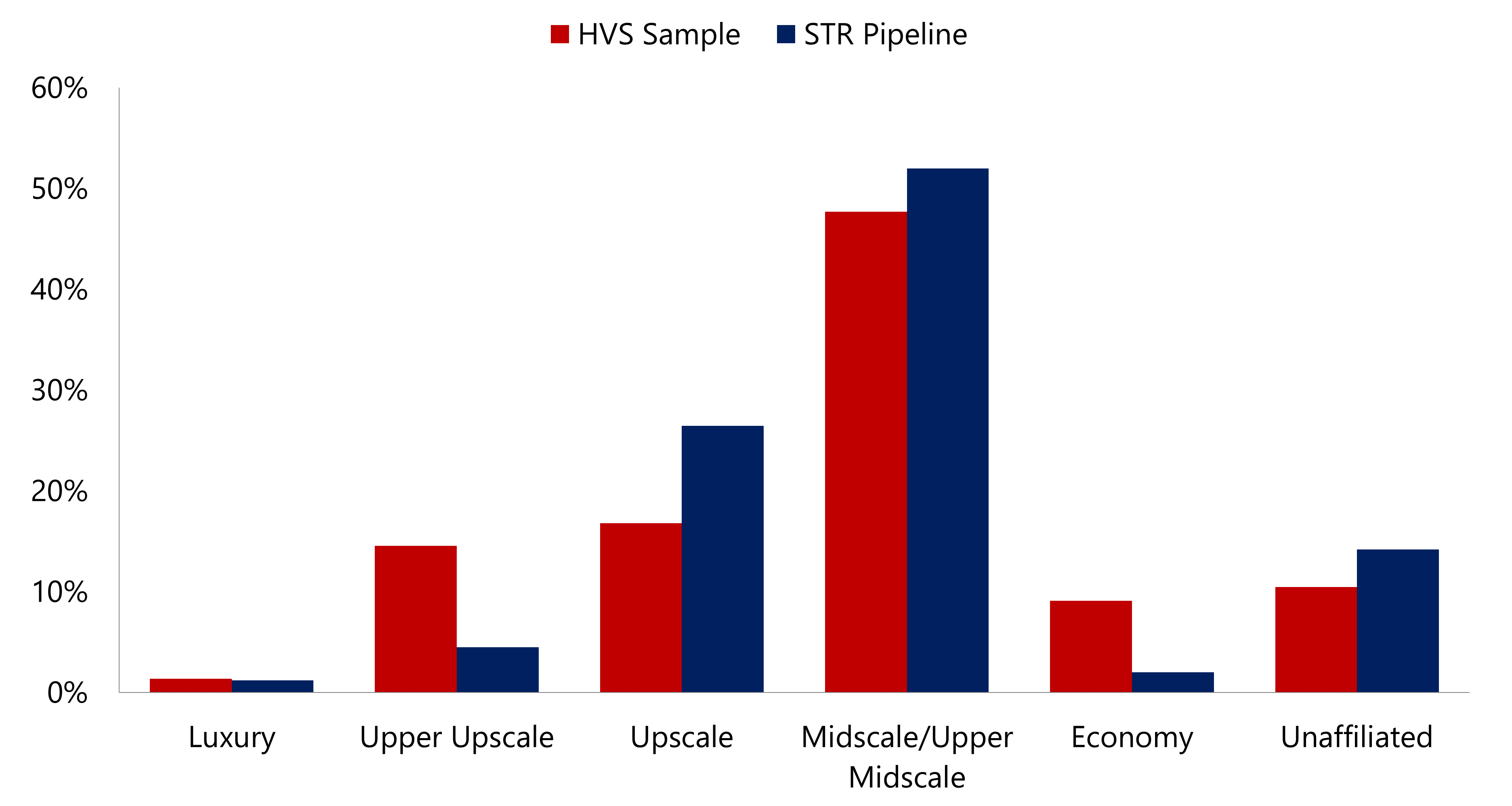 From the chart above, one can see the difference between our sample data and the STR pipeline, with little variation. Again, because of our large sample size from so many markets across the U.S., our data are considered representative of the national as a whole.

The nadir of hotel development costs in the most recent cycle was 2010 when construction demand was very low coming out of the recession. Costs in most categories have increased over the last five years. The averages and medians reflect a broad range of development projects across the U.S., including projects in areas with low barriers to entry and in high-priced urban and resort destinations. We note that the figures below are not adjusted for locational attributes. 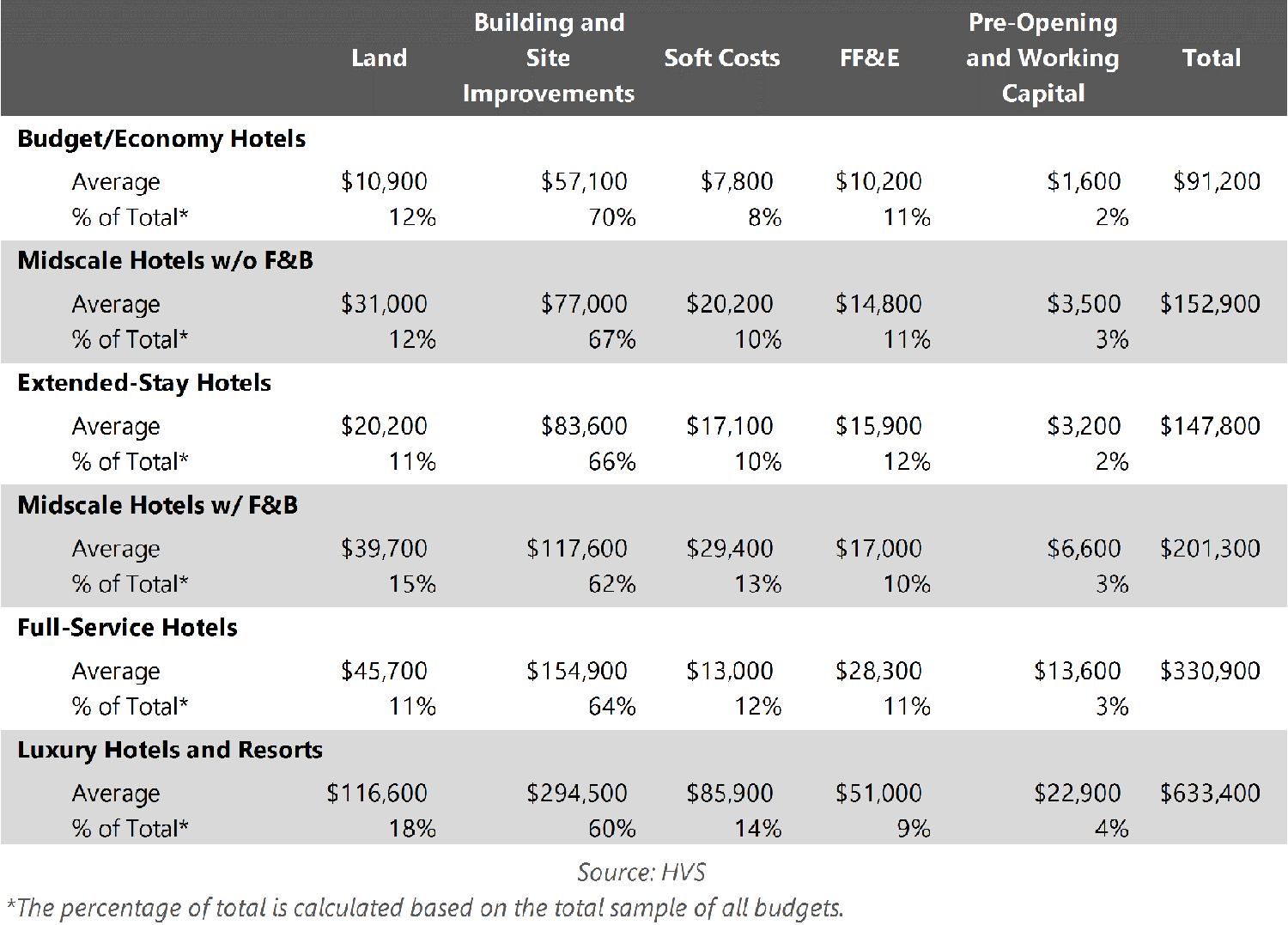 Two trends emerged in our analysis of this year’s data set. First, the data included a larger number of projects in secondary and tertiary locations. The development of hotels in these markets has grown as local economies have improved in smaller markets. Second, the introduction of lower-cost hotel prototypes has pushed the low end of the range even lower. With the combination of these factors (development of low cost brands in low barrier-to-entry markets), we see a major shift in this year’s data compared to prior years. Hilton and Marriott have both introduced low development-cost brands—Home2 Suites by Hilton, Tru by Hilton, and Moxy (Marriott). All of these brands have strong development pipelines, marketed around $85,000 to $110,000 per key for the standard prototype. This has resulted in average development costs lower than prior years. We note that the high end of the range in both midscale and extended-stay hotels has also increased substantially. The increased development of limited- and select-service brands in higher-cost locations, such as CBDs, skewed the high end of these segment ranges.

As noted previously, the methodology used in the 2015/16 survey varied slightly from the prior years’ development surveys. The data in 2015 were more representative of all chain-scale properties and represented a wider sample of properties across the country.

Finally, we recommend that users of the HVS Hotel Development Cost Survey consider the per-room amount in the individual cost categories only as a general guide for that category. The totals for low and high ranges in each cost category do not add up to the high and low ranges of the sum of the categories. None of the data used in the survey included a project that was either all at the low range of costs or all at the high range of costs. A property that has a high land cost may have lower construction costs and higher soft costs. Hotels developed in high-cost markets, such as New York City, account for a small percentage of the projects, but typically have per-room component costs that set the upper end of the range. Alternatively, secondary and tertiary markets will generally account for projects on the lower end of the range. The total costs shown in the preceding table are from per-room budgets for hotel developments and are not a sum of the individual components.

All individual property information used by HVS for this cost survey was provided on a confidential basis and deemed reliable. Data from individual sources are not disclosed.

Each year, HVS researches development costs from our database of actual hotel construction budgets, industry reports, and franchise disclosure documents. These sources provide the basis for our range of component costs per room. %%ViewCount%% Views 1 Comments
Share:
Subscribe To Newsletter