Hotels in Fort Lauderdale and the greater market recorded a banner year in 2019. The new decade kicked off a strong start with expectations that the momentum would continue, led by the demand from Super Bowl LIV held in nearby Miami Gardens. However, the onset of COVID-19 in March 2020 brought travel to a sudden standstill across the nation, immediately impacting hotels in the local market. 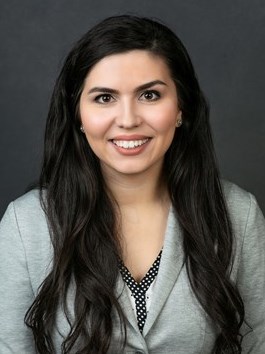 Fort Lauderdale, often regarded as the "Venice of America," is the seat of Broward County and the center of economic activity in the area. The Intracoastal Waterway is lined with waterfront restaurants, scenic walkways, and marinas. Dubbed the “Yacht Capital of the World,” the city hosts the annual Fort Lauderdale International Boat Show, the world’s largest in-water boat show, which generated $1.3 billion in 2019. Despite the COVID-19 pandemic, the 2020 show continued as planned with necessary precautions in place.[1] Fort Lauderdale remains a popular tourist and yachting destination in South Florida, which positions the market for a strong recovery as it continues to benefit from its year-round warm climate, increases in domestic travelers, and staycations. This will be especially evident as travelers opt to vacation domestically, whether to drive-to or short-flight destinations, in lieu of cruise and international travel.

Prior to the onset of the COVID-19 pandemic, the increases in activity at the airport and cruise port were echoed in the continued opening of new hotels, with over 3,000 rooms introduced from 2017 through 2019. Despite the pandemic, development continued into 2020 with the addition of nearly 800 rooms. Most recently, the AC Hotel by Marriott Sawgrass Mills in Sunrise opened in early April 2021 with 174 rooms.[2]
Growth in Hotel Supply from 2017–2020

Prior to the onset of COVID-19, the greater Fort Lauderdale market was experiencing unprecedented growth across all spectrums of the hospitality and tourism industries. While Broward County did not mandate the complete closure of hotels, state and local emergency orders went into effect mid-March that limited the type of guests hotels could accept to essential travelers only. By April 2020, some hotels had temporarily suspended operations. Shortly after Memorial Day weekend, hotels began welcoming guests back. Based on discussions with market participants, the summer months marked an increased in leisure travelers, including both local residents and out-of-state visitors. The strong leisure demand continued well into the fall, which is often considered the shoulder season in South Florida. According to the GFLCVB Hospitality Report dated March 2021, year-over-year metric comparisons for Broward County show occupancy increased 61%, average daily rate (ADR) remained flat, and revenue per available room (RevPAR) increased 48%.[3] This growth is particularly notable as the pandemic started exactly one year prior to the comparison point.

As mentioned previously, Fort Lauderdale has experienced significant growth in terms of new hotel supply in recent years, and this trend continues. The map below shows the hotels that are under construction and slated for opening in either 2021 or the following years. In addition to the hotels now under construction, several hotels are in various developmental stages throughout Fort Lauderdale and the greater market but have not yet broken ground.
Hotels Currently Under Construction 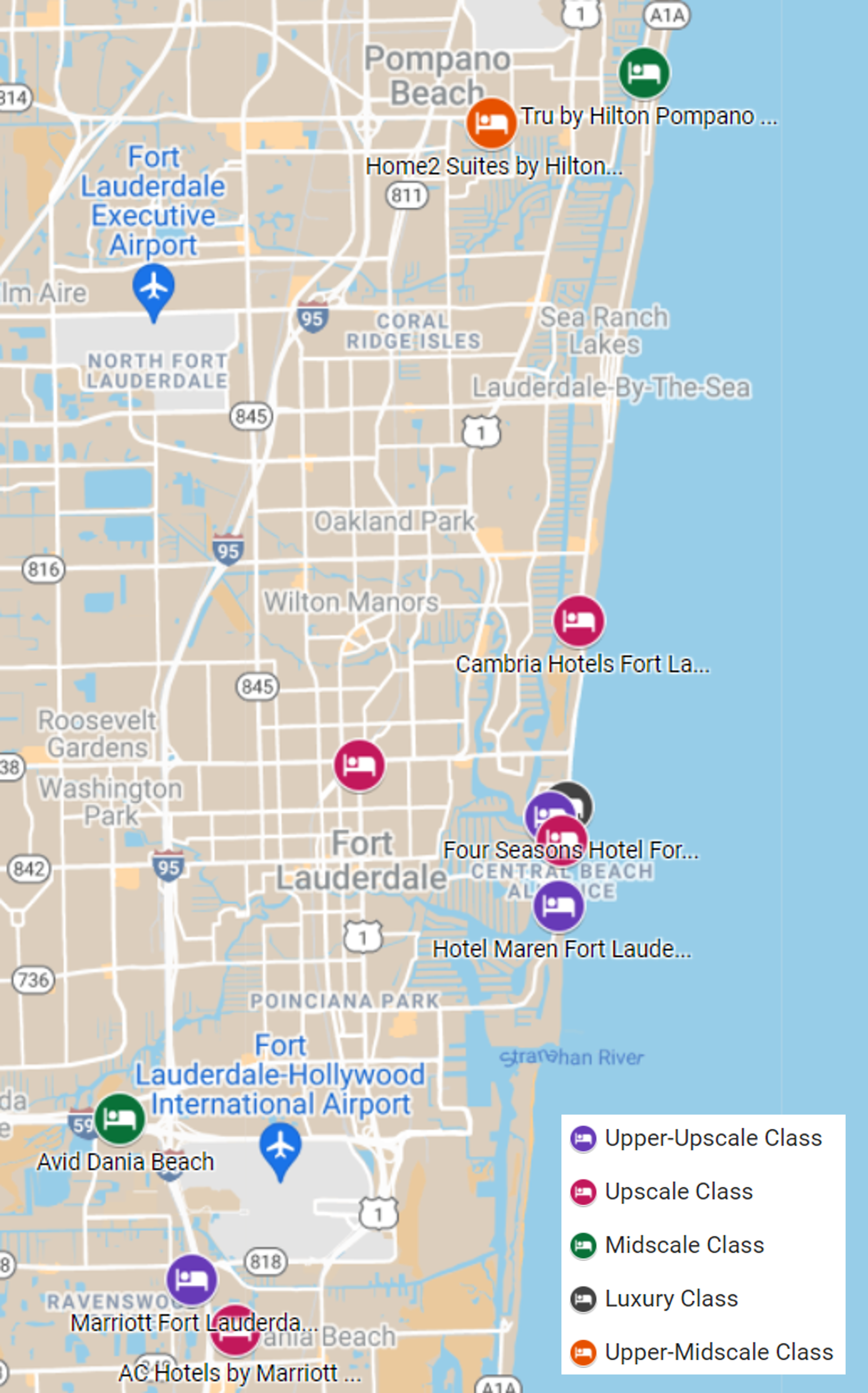 Based on discussions with representatives, the Greater Fort Lauderdale Alliance continues to focus on attracting impactful industries to the area, including aviation and aerospace, financial services, and global logistics. Local officials are reportedly taking advantage of Fort Lauderdale’s evolving reputation in these sectors, coupled with the desirable lifestyle that the city and Broward County have to offer, to successfully entice businesses to either relocate headquarters or open satellite offices.

In the wake of the pandemic, Visit Lauderdale launched the “LauderDeals” campaign, providing various deals and packages specifically geared at boosting the local hotel and tourism industry. Originally, this program was intended for the summer months, but its success has prompted local participants to extend deals into the latter part of 2021.

The Fort Lauderdale-Hollywood International Airport (FLL) is one of the fastest growing airports in the country. The Federal Aviation Administration’s independent passenger forecast shows FLL as having the highest passenger growth rate among the large hub airports through 2035.[4] The airport’s passenger volume registered year-over-year growth from 2013 to 2019, with the passenger count doubling in that timeframe.[5] The Broward County Aviation Department’s Master Plan for the airport will ensure that the facilities and infrastructure of the airport meet the needs of the market. Most recently, the airport underwent a $95-million renovation, which included upgrades to its oldest runway.[6] In addition to physical enhancements, airlines regularly launch new routes out of FLL. While FLL, along with most airports throughout the country, was affected by the pandemic, it remained on the radar for major airlines to expand routes. As of April 2021, American Airlines had launched three new routes out of FLL to Boston Logan International, New York John F. Kennedy International, and Los Angeles International Airports. These new routes and continued improvements at the airport reinforce a positive outlook for Fort Lauderdale.

The Greater Fort Lauderdale/Broward County Convention Center is currently closed to undergo a $1-billion expansion. The highly anticipated upgrade will bring the size of the facility to 1.2 million square feet upon completion. Phase I of the project includes an expansion of the existing main exhibit hall, which is expected to open in the fall of 2021, according to local officials. The latter two phases of the project will include a standalone development and an onsite 800-room hotel, to be operated by Omni Hotels. Additional plans call for the modernization of technology throughout the facilities. While the COVID-19 pandemic has set back the timeline for completion, convention officials anticipate it to be completed by 2024/25.[7]

Port Everglades is among the top three cruise ports in the world, hosting nearly four million passengers annually. Its proximity to Fort Lauderdale-Hollywood International Airport and the beaches is one reason for its success. According to Port Everglades, in fiscal 2019, the total value of the facility’s economic activity was nearly $33 billion, supporting more than 219,000 jobs. However, Port Everglades was affected immensely by the COVID-19 pandemic, and cruise lines are still under a federal government “no sail” order that is expected to last through much of 2021. Norwegian Cruise Line has been among the first to announce plans to resume sailing as early as July 2021, although the company’s request was still pending approval from the Centers for Disease Control (CDC) at the time of this article.[8] Despite these circumstances, the Port’s $1.6-billion expansion is underway and is slated for completion by 2025.[9]

The continued improvements at the airport and cruise port and the full revamping of the convention center should support the existing hotel supply and the expected new hotel developments. With a strong start to the year, hotel operators will likely continue to focus on occupancy growth while gradually increasing ADR to pre-pandemic levels. Given the strong leisure demand prevalent in the market, recovery is already underway. The outlook for Fort Lauderdale’s hotel market is positive based on the historical hotel performance and pre-pandemic development. Over the long term, Fort Lauderdale’s profile as a premier beach destination, coupled with efforts by the complementary sectors, should bode well for a full recovery.

For more information, contact Emeldina Paratusic or anyone else on the HVS Miami team.

Emeldina Paratusic is a Senior Project Manager with the HVS Miami office. Prior to joining HVS in 2019, Emeldina worked as an account manager for Booking.com. Her other prior experience includes hotel management at a privately-owned boutique hotel in Fort Lauderdale, Florida, and an internship overseas in 2013. Originally from Chicago, Emeldina earned her bachelor’s degree from DePaul University and her MBA from Lynn University. Contact Emeldina at +1 (470) 522-8587 or [email protected].

Hotels in Fort Lauderdale and the greater market recorded a banner year in 2019. The new decade kicked off a strong start with expectations that the momentum would continue, led by the demand from Super Bowl LIV held in nearby Miami Gardens. However, the onset of COVID-19 in March 2020 brought travel to a sudden standstill across the nation, immediately impacting hotels in the local market. %%ViewCount%% Views Comments
Share:
Subscribe To Newsletter