Indianapolis was expecting another record-breaking visitation year in 2020. However, the onset of the COVID-19 pandemic brought the city’s thriving convention and sports/entertainment sectors to a halt, dragging the hotel industry down with it. Fortunately, certain factors, including the continued operation of the Indianapolis Convention Center in 2020 and a promising 2021 calendar of events, are providing a good foundation for its recovery.

Downtown Indianapolis experienced record visitation in 2019, led by the city’s impressive calendar of national conventions and major sporting events. The award-winning Indianapolis Convention Center (ICC), which features 749,000 square feet of exhibit space and twelve connected hotels, hosts several national conventions, expositions, and events every year. Lucas Oil Stadium (LOS), located adjacent to the ICC, is a 67,000-seat, multi-purpose, retractable-roof stadium that is home to the NFL's Indianapolis Colts. Major 2019 citywide conventions included GenCon, Indiana Comic Convention, FDIC International, the Performance Racing Industry Trade Show, and the National FFA Convention & Expo. Dubbed the “Amateur Sports Capital of the World,” Indy annually hosts the Big Ten Football Championship Game, as well as numerous youth and collegiate sporting tournaments. Professional sports are also prevalent in Indianapolis with the NFL Scouting Combine and the Indianapolis 500, which is the world’s largest single-day sporting event. In all, the city’s state-of-the-art facilities helped to draw over 29.2 million visitors to Indianapolis in 2019. These visitors booked over two million hotel room nights Downtown and 7.94 million throughout the greater metropolitan area, speaking to the far-reaching economic ripple effect of Indy’s visitation on the surrounding area.[1] In all, this visitation record helped to generate over $5.5 billion in visitor spending for the greater Indianapolis area.

Last year was anticipated to be another record-breaking visitation year for Downtown Indianapolis; however, the onset of the COVID-19 pandemic in March 2020 brought the national tourism, events, and hospitality industries to a screeching halt. The Indianapolis Convention Center and Lucas Oil Stadium suspended operations in March as state-mandated restrictions were placed on large gatherings in efforts to mitigate the spread of the coronavirus. By August 2020, Visit Indy reported the loss of 306 conventions and events that were scheduled for 2020 and 2021, amounting to nearly $550 million in lost revenue for the city.[2] These cancelations included, but were not limited to, GenCon, the FFA Convention & Expo, the NCAA men’s Big Ten basketball tournament, various NCAA swimming events, the Olympic Trials for USA Diving, and numerous high-school sports tournaments.

According to Visit Indy, the city is the most convention-dependent city in the nation. Therefore, the effect of these widespread cancellations was devastating to the city’s hoteliers, who depend on the city’s robust events calendar as their main source of business. There are over 7,800 hotel rooms in Downtown Indianapolis. Data provided by STR and Visit Indy indicate that occupancy in Downtown Indianapolis dropped from 71.7% in 2019 to 28.8% in 2020, representing a 60% decline. Meanwhile, average daily rate (ADR) decreased from $166.64 in 2019 to $134.47 in 2020, a roughly 19% drop. Depressed market conditions due to the pandemic prompted countless hotels to suspend operations nationwide, creating a hospitality crisis unlike any experienced before, and Indianapolis was no exception. Some of Indy’s landmark, full-service properties, such as the JW Marriott, Marriott Indianapolis Downtown, and the Conrad Hotel, suspended operations from March through mid-July.
Year-Over-Year Market Performance Metrics 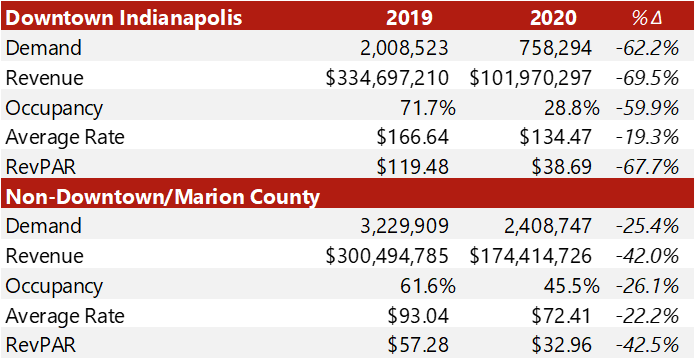 There are some silver linings apparent indicating that Indianapolis could already be on its road to recovery. For example, despite a significant reduction in operations compared to a typical year, the ICC and LOS continued to host events throughout 2020, unlike other major venues nationwide, which transitioned to use as a temporary COVID-19 hospitals and support centers. According to Visit Indy, youth sporting events made up the majority of the gatherings. One article noted that the city managed to host over 18 events in the summer and fall of 2020 despite the circumstances, bringing nearly 40,000 people to the Downtown area.[3] This enabled the city to practice, implement, and perfect new protocols and efficiencies related to the COVID-19 pandemic, which will likely be a new reality (and for some, a logistical struggle) in the industry for the foreseeable future. By keeping the status quo, the ICC and LOS were even able to attract business that was originally scheduled to occur elsewhere in 2020. For example, some of the youth tournaments were scheduled to be held at Chicago’s McCormick Place; however, due to stricter restrictions in Illinois and McCormick’s temporary use as a COVID-19 hospital, these were moved to Indy. Overall, the continued operation of the ICC and LOS throughout 2020 has certainly lent the city a solid foundation on which to kickstart the recovery in 2021.

As another positive factor to come out of 2020, many events that were canceled in 2020 were rescheduled for 2021, and some added another year to their contracts. For example, GenCon, which was slated to convene in Indy every summer through 2025, extended through 2026. Similarly, the FFA Convention & Expo extended its contract, which was slated to end in 2031, through 2033.[4] As of year-end 2020, over 200 events had been scheduled for Downtown Indy in 2021.[5]

A major win for Indianapolis was the announcement in early 2021 that the NCAA would hold the entire NCAA Men’s Basketball Final Four tournament in Indiana from mid-March to early April, with a majority of games to be played in Downtown Indy. Games will be played in the LOS, and practices will be held in the ICC on twelve makeshift courts. Five of the city’s landmark hotels (the JW Marriott, Marriott Indianapolis Downtown, Westin, Hyatt Regency, and Le Méridien) will host the 68 teams coming to town. Additionally, most of the roughly 7,800 hotel rooms Downtown will be booked to some capacity for the tournament, whether as a partner hotel or as overflow for fans. Officials estimate that the tournament could have an economic impact on the city of roughly $100 million.[6] Furthermore, Indy’s hosting of the Final Four has perhaps spurred other event planners to set their sights on the city. The mid-March Big Ten Conference men’s basketball tournament was relocated to Indianapolis, another event that was originally scheduled for Chicago’s McCormick Place.[7] This tournament will be preceded by the Big Ten Conference women’s basketball tournament in early March, which was planned to be played in Indy all along. Downtown Indy’s relatively busy first half of 2021 bodes well for the city, which faces an uphill battle overall given that meeting/group business will be slower to return than other segments.

Until 2019, new hotel supply openings in Indianapolis were relatively limited. Between 2011 and 2019, Downtown experienced a roughly 4% increase in new supply. However, in response to the city’s strong visitation numbers in the years immediately preceding the COVID-19 pandemic, the pipeline expanded accordingly. According to STR, over 1,000 rooms were added to the market in 2019/20. An especially notable 2020 opening for Downtown Indy was the 139-key, boutique Bottleworks Hotel, which came online in December. The hotel is a historic redevelopment of an old Coca-Cola bottling plant, offering a new, luxury-lifestyle destination hotel within the growing Bottleworks District mixed-use development.

As of the writing of this article, 655 hotel rooms are under construction, including the TownePlace Suites by Marriott Indianapolis Downtown, the Tru by Hilton Indianapolis Downtown, a dual-branded Hampton/Homewood Suites by Hilton hotel at Indiana University–Purdue University Indianapolis (IUPUI), and the Kimpton Indianapolis Hotel, all slated for 2021 openings. Another proposed hotel is the 40-story, 800-room Signia Hotel for Pan Am Plaza, which will be connected to the convention center. Construction is planned to begin in late 2022, with completion scheduled for late 2024 or early 2025.

In all, while Indy’s event schedule and hospitality industry experienced a devasting setback because of the pandemic, the city’s strong foundation and numerous prospects for the future are aiding in the road to recovery. Its resilience during 2020 is contributing positively to its reputation as a world-class convention and sports/entertainment destination, which should bolster the city in the years to come.

[3]Indy Star, "Indianapolis kept its events industry open through most of the pandemic. What's the tradeoff?" Retrieved February 5, 2021.

Indianapolis was expecting another record-breaking visitation year in 2020. However, the onset of the COVID-19 pandemic brought the city’s thriving convention and sports/entertainment sectors to a halt, dragging the hotel industry down with it. Fortunately, certain factors, including the continued operation of the Indianapolis Convention Center in 2020 and a promising 2021 calendar of events, are providing a good foundation for its recovery. %%ViewCount%% Views Comments
Share:
Subscribe To Newsletter