Since early March of last year, hotels in the greater Dallas/Fort Worth Metroplex have suffered varying degrees of demand loss in demand due to the COVID-19 pandemic, and while South Dallas’s economy was not immune to the impact of the pandemic, the logistics/distribution, manufacturing, and industrial industries have remained strong in this market.

The industrial sector is a key player within southern Dallas County and northern Ellis County, which are part of the Best Southwest Partnership. A vast network of roads in the greater Metroplex provide direct access to other parts of the region and country. South Dallas is home to the International Inland Port of Dallas (IIPOD), an intermodal and logistics district that encompasses 7,500 acres and five municipalities. This area hosts over 17,000 workers, and major manufacturing tenants include American Textile Company, Pioneer Frozen Foods, Niagara Bottling, and Serta Dormae. Corporations with logistics/distribution facilities in the IIPOD include Amazon, Conn’s, The Home Depot, L’Oréal, and National Tire & Battery. Additionally, in 2020, FedEx signed a new lease to operate its nearly 800,000-square-foot sorting facility in South Dallas, near the company’s shipping hub in Hutchins. 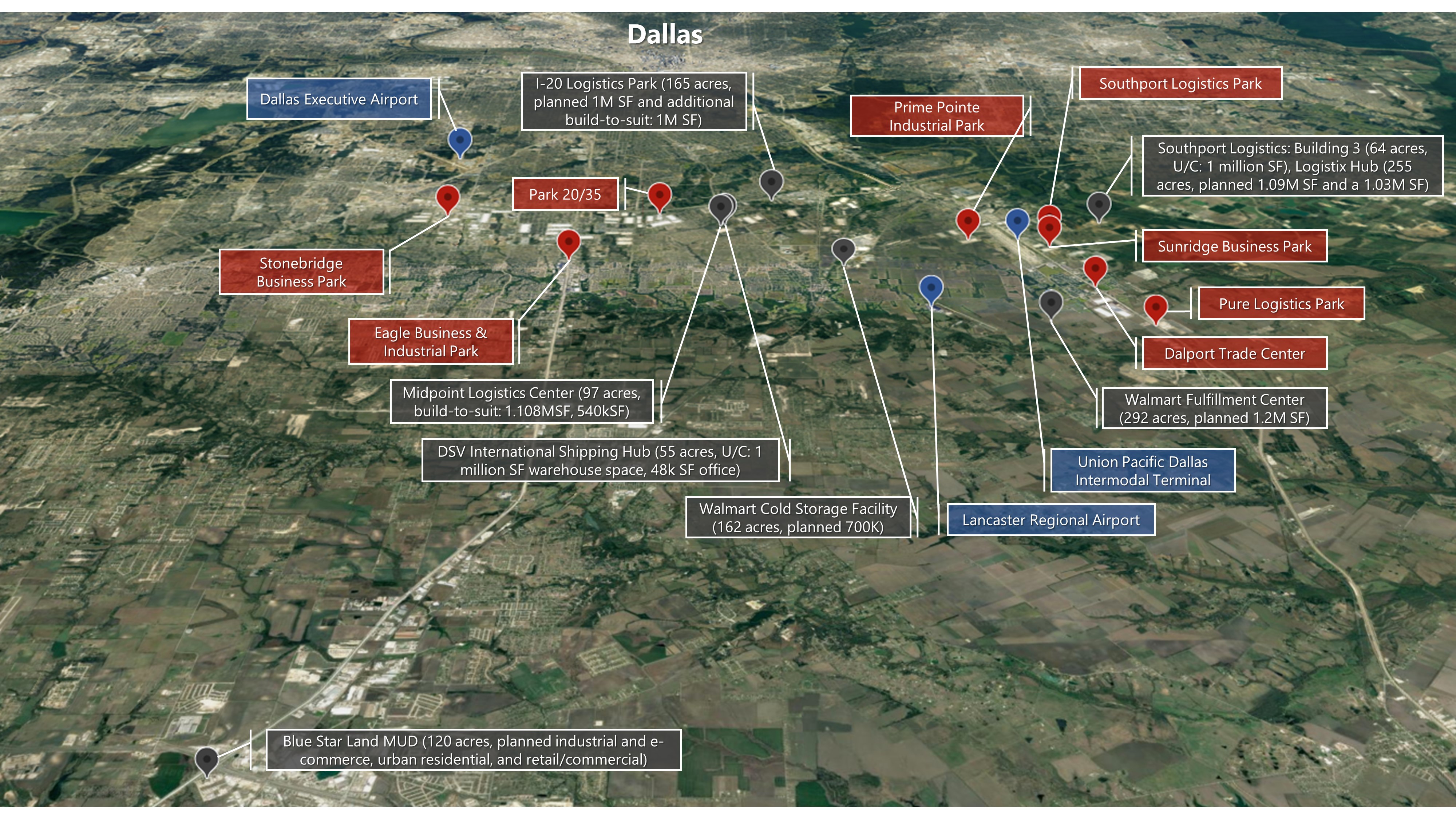 Within the inland port, the focus of moving cargo is surface transportation. Union Pacific’s Dallas Intermodal Terminal comprises 360 acres and has played a key role in the increase in cargo volume in the area, as the facility provides intermodal access to the Ports of Los Angeles and Long Beach. Lancaster Regional Airport and Dallas Executive Airport provide private commercial services for area businesses and service for corporate jets. The single-runway Lancaster Regional Airport is the only airport in Dallas County south of Interstate 20. At Dallas Executive Airport, construction of the Henry B. Tippie National Aviation Education Center is ongoing; the facility, developed by the Commemorative Air Force, will include a STEM Innovation aircraft hangar, classrooms, and exhibit space. While a severe winter storm in February 2021 temporarily paralyzed the region’s supply chain, the DFW Metroplex remains a strong distribution hub, supported by the area’s vast transportation infrastructure and facilities, and southern Dallas County continues to strengthen as an industrial hotspot.

Prior to the COVID-19 pandemic, market occupancy was generally near or above 70%. Like the Metroplex, state, and nation, the South Dallas lodging market was not immune to the economic slowdown, and RevPAR bottomed out in April 2020. Recovery trends were evident in late 2020, and this trend has continued thus far in 2021. This market is poised to recover quickly given the prevalence of demand from the logistics, manufacturing, and industrial industries, which have greater resiliency than other prominent industries in primary or urban markets, such as finance, technology, and telecommunications.

Since 2018, nine hotels (roughly 690 guestrooms) have opened in the South Dallas market, within the communities of DeSoto, Cedar Hill, Duncanville, Lancaster, and Red Oak. Additionally, we have identified the following hotels that are under construction or in early development.

Two significant projects in the local market include the under-construction Aloft in Cedar Hill, which will include a 12,000-square-foot meeting and banquet facility, and the planned Courtyard by Marriott as part of the Red Bird Mall redevelopment project. This redevelopment is also slated to include 300,000 square feet of office space, 400,000 square feet of retail and restaurant space, and apartments.

The greater South Dallas area is well positioned for long-term economic strength. Following the widespread distribution of the vaccine and lifting of restrictions on business operations, confidence in co-working environments and travel is increasing. We anticipate that hotel demand will continue to rebound and return to pre-COVID-19 levels in this growing southern Dallas County market. Moreover, given the growing industrial landscape of the region, we expect hotel supply additions to be absorbed quickly.

We continue to watch the factors affecting the local hotel industry, and our many appraisal and consulting engagements throughout the Metroplex, inclusive of South Dallas communities, allow us to keep our finger on the pulse of the market.

Since early March of last year, hotels in the greater Dallas/Fort Worth Metroplex have suffered varying degrees of demand loss in demand due to the COVID-19 pandemic, and while South Dallas’s economy was not immune to the impact of the pandemic, the logistics/distribution, manufacturing, and industrial industries have remained strong in this market. %%ViewCount%% Views Comments
Share:
Subscribe To Newsletter