Richmond was recently rated among the world’s top tourism destinations, and leisure demand remains a pillar of the city’s hotel industry. Corporations, government institutions, and conventions are also driving occupancies and interest in new supply. 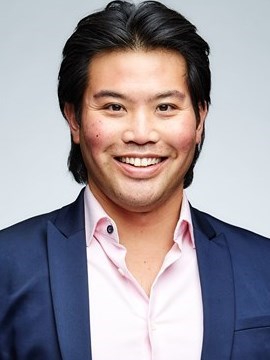 Richmond, the state capital of Virginia, thrives on economic energy primarily driven by entities in the fields of law, finance, and tourism. Home to the Fourth Circuit of the U.S. Court of Appeals, the Federal Reserve Bank, and nearly a dozen Fortune 500 companies, Richmond’s hotel demand generators also include tourism draws such as craft breweries and world-class museums of art and science.

State of the Market Tourism

Frommer’s named Richmond the “Top Destination for Travel” worldwide in 2014, and the city earned the number three spot in Travel + Leisure’s top places to visit last year. Some 7 million visitors to Richmond spent more than $2 billion in the city in 2015.[1] The same year, tourism accounted for 22,800 jobs and salaries totaling $506 million. Richmond collected $64 million in tourism-related tax revenue in 2015, according to the U.S. Travel Association.
The table below illustrates visitor spending across the greater Richmond area.
Nearly $680 Million in Tourist Spending in Richmond in 2015 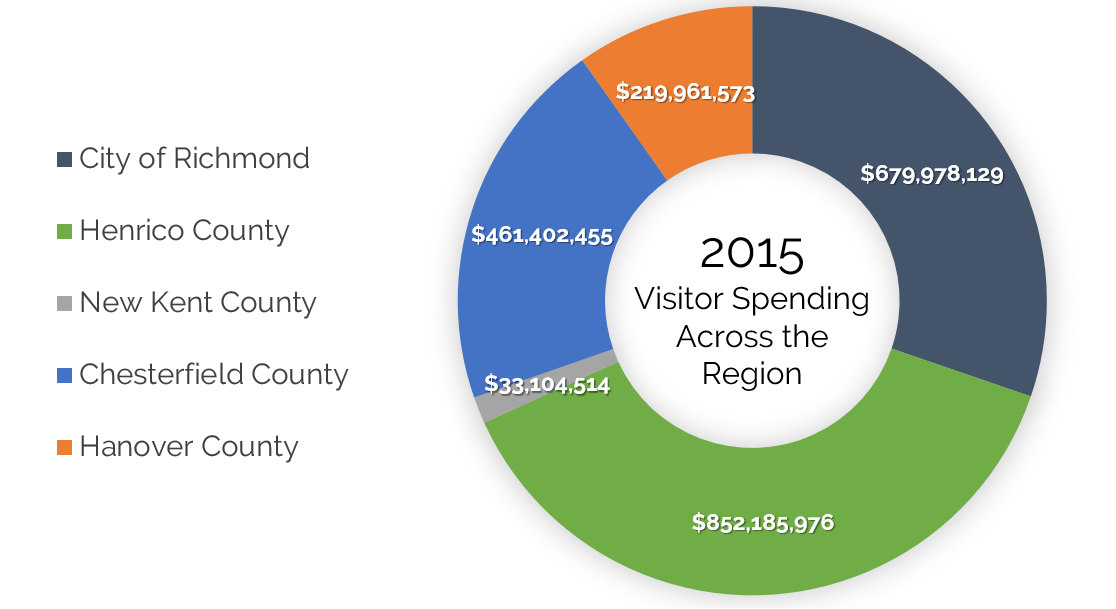 Source: Richmond Regional Tourism, 2016
The Richmond tourism market is active year-round, with an uptick in the spring and summer.
More than 50% of Richmond’s Annual Visitors Arrive in Spring and Summer 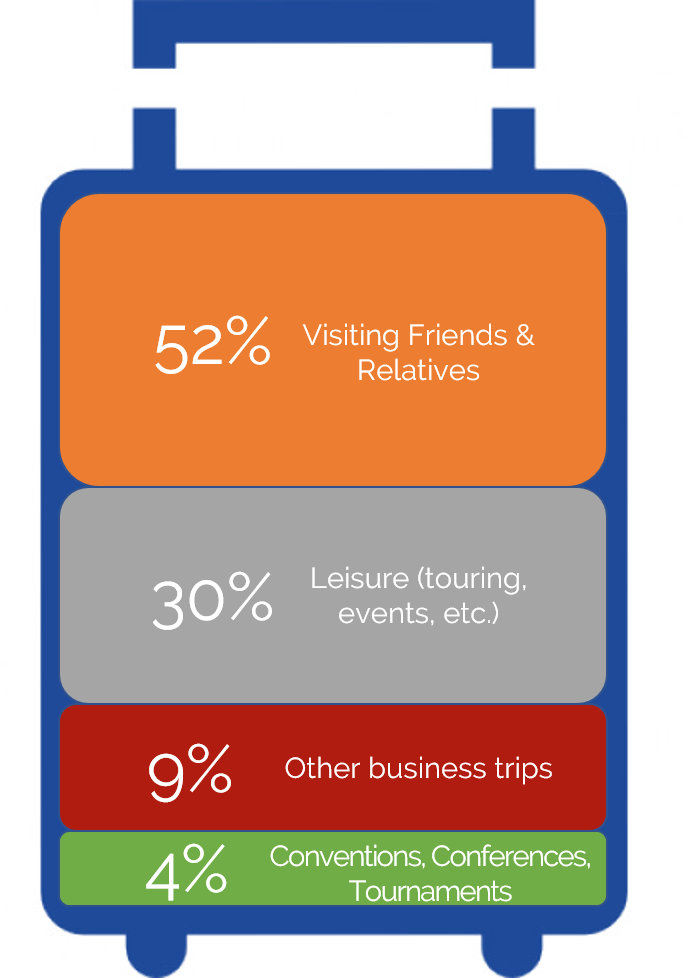 Richmond’s 62.5-square-mile expanse sits at the center of the Richmond Metropolitan Statistical Area (MSA), which recorded a population of 1.3 million in 2016. The Richmond MSA’s population is expected to grow by 15% between 2010 and 2020.
Multiple transportation options are a key to the region’s growth. More than half of the U.S. population is within a day’s drive of Richmond. Three major interstate highways cross the area. AMTRAK provides weekday passenger rail service. CSX and Norfolk Southern operate commercial rail services in the MSA, along with more than 100 motor freight companies. The Port of Richmond also links the area to major shipping routes worldwide.
Richmond International Airport (RIC) recently underwent a $280-million expansion, making it one of the most well-equipped airports on the east coast. Just a ten-minute drive from Downtown, RIC carries more than 3.5 million travelers and about 85 million pounds of cargo annually.
The following table illustrates recent operating statistics for Richmond International Airport.
RIC Passenger Traffic Has Risen Each Year Since 2014

Richmond’s five institutions of higher education include the University of Richmond, Virginia State University, Virginia Union University, Reynolds Community College, and Virginia Commonwealth University, whose student body totals more than 32,000.
More than 60% of Richmond residents have attended college in some form, and more than 38% hold an Associate Degree or higher, which is above the national average. This highly educated labor pool allows businesses to easily find the necessary talent, especially in Richmond’s target industries of technology and health and life sciences.

Richmond’s economy is supported by the five pillars of state and federal government; advanced manufacturing; finance, insurance and real estate (FIRE); transportation and logistics; and health and life sciences—an industry that is rapidly expanding in Richmond.
The Virginia BioTechnology Research Park is a 34-acre commercial life sciences hub adjacent to the VCU Medical Center, home to over 60 public and private bioscience companies and research institutes including the Richmond-based Altria Group, the Virginia Office of the Chief Medical Examiner, and the United Network for Organ Sharing. The park’s nine buildings house over 2000 scientists, engineers, and support staff.
When compared to other MSAs with a population of approximately 1 to 2 million, Richmond ranked second for the total number of Fortune 500 companies, behind Silicon Valley’s San Jose. Below is a list of the Fortune 1000 companies headquartered in Richmond, with Fortune 500 companies highlighted in bold.
Eleven Fortune 1000 Companies Are Headquartered in Richmond 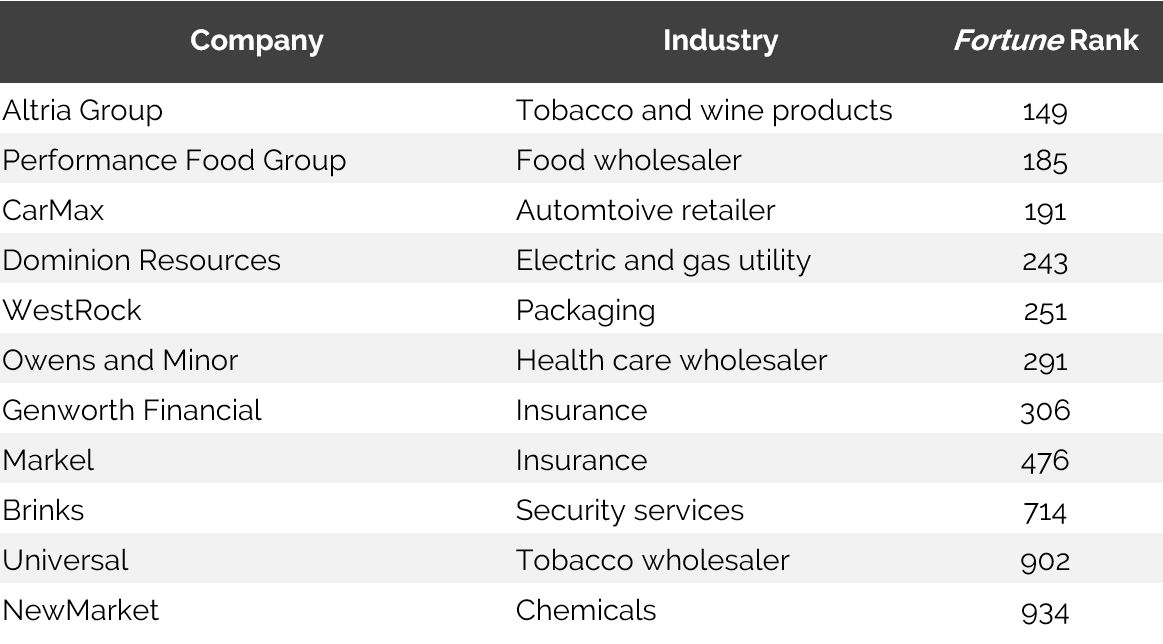 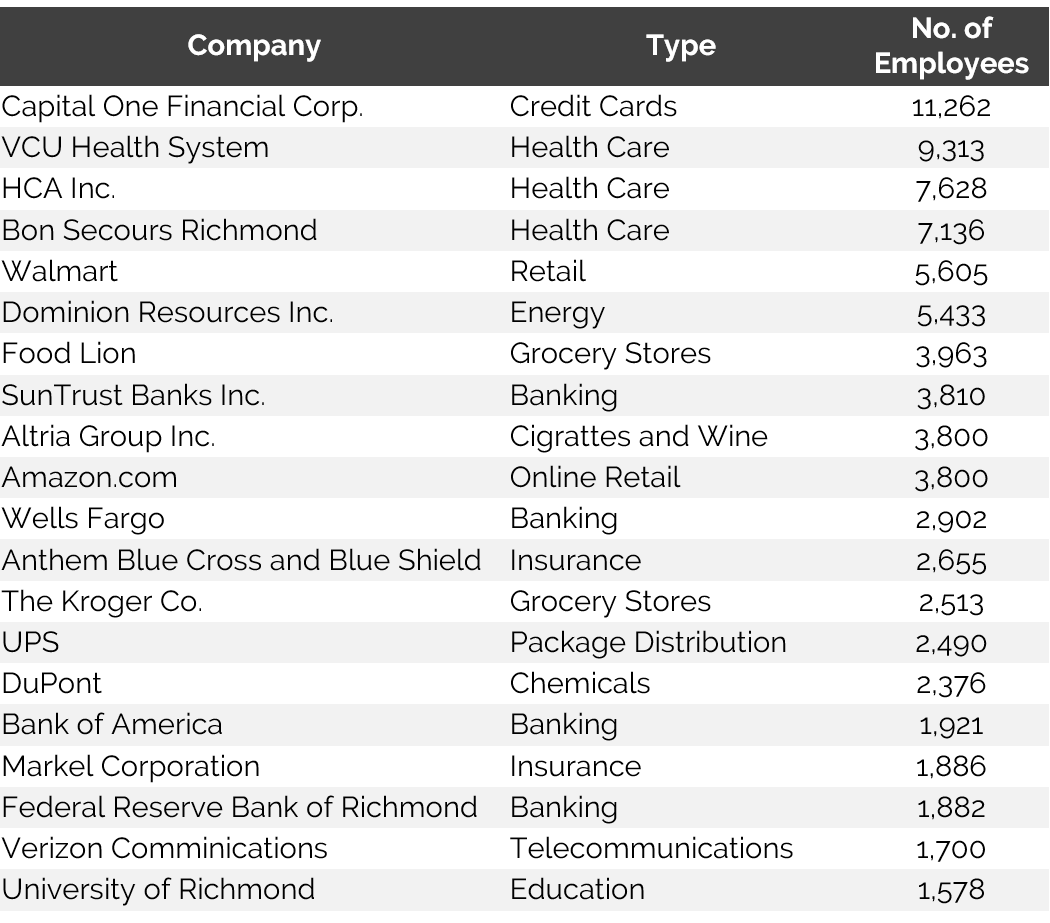 Capital One Financial Corp. has bought a 36,000-square-foot building in Richmond’s Shockoe Bottom neighborhood, with plans to turn the space into an incubator for local startups. Startup Virginia, which will run the new business incubator, recently created a new program to educate local aspiring entrepreneurs; its nine-week CO.STARTERS Virginia course launched in April 2017.

In fiscal 2015/16, over 174,500 room nights booked in the greater Richmond area were attributed to the meeting and group market. Destination Marketing Association International estimates the annual economic impact of meetings in greater Richmond to be at just under $119 million.

Sports tournaments and groups accounted for 45% of meetings booked by the local Convention and Visitors Bureau. Major sporting events include the two NASCAR weekends at the Richmond International Speedway in April and September, the NCAA Atlantic 10 women’s basketball tournament, and various youth sports, including lacrosse, soccer, swimming, and field hockey. Richmond’s midway point on the eastern seaboard makes the city a popular destination for regional tournaments.

Religious groups form the next largest source of group business for Richmond-area hotels, with Jehovah’s Witness groups booking six full weekends during the traditionally slower summer months, bringing in 7,000 guests each weekend. According to Richmond Regional Tourism CEO Jack Berry, no large-scale changes are expected to affect the overall dynamics of meeting and group demand in Richmond in the near term.

An 87-room Moxy Hotel, Marriott’s innovative boutique brand, is under construction in Richmond. Shamin Hotels purchased the brick building at the corner of Fifth and Franklin Streets for $2.5 million from the Richmond Economic Development Authority, which had previously used the building as a downtown business incubator.
Having launched the brand in Milan in September 2014, Marriott expects to have nearly 150 Moxy hotels operating around the world over the next decade. Standout features of the Moxy brand include a 24/7 lounge and bar, hookups for all kinds of phones and electronic devices, keyless-entry guestrooms, in-room screen-casting, elevators that double as photo booths, and motion-sensor lighting.
Neil Amin, President and CEO of Shamin Hotels, expects this adaptive-reuse construction project to be completed by February 2018. Jack Berry noted the “the Moxy reinforces that [Richmond] is a high-profile destination. This shows we are among the who’s who of cool destinations.” [2]

A total of 529 rooms have been added to the greater Richmond hotel inventory since 2014, which brings the total number of hotel rooms in the area to 10,056.
Richmond-based Apple REIT was behind the December 2014 openings of two downtown hotels: the 135-room Courtyard by Marriott Richmond Downtown and the 75-room Residence Inn by Marriott Richmond Downtown. These two hotels are located within the First Freedom Center complex, a combined hotel and education center.
The Quirk Hotel, a luxury, 75-room, boutique property in Richmond’s thriving arts district, opened in the fall of 2015; it is owned by regional supermarket chain scion Ted Ukrop. Original works of art are featured in each guestroom of the exquisitely remodeled 1916, Italian Renaissance-style building, which was formerly a J.B. Mosby & Co. department store.
In addition to the proposed Moxy Richmond, Shamin Hotels was also behind the early 2017 opening of the first dual-branded hotel in Downtown Richmond: the 100-room Homewood Suites by Hilton and 144-room Hampton Inn & Suites, housed in a 20-story former office tower at 700 E. Main Street. This dual-branded property is also home to a rooftop bar and restaurant, Kabana. 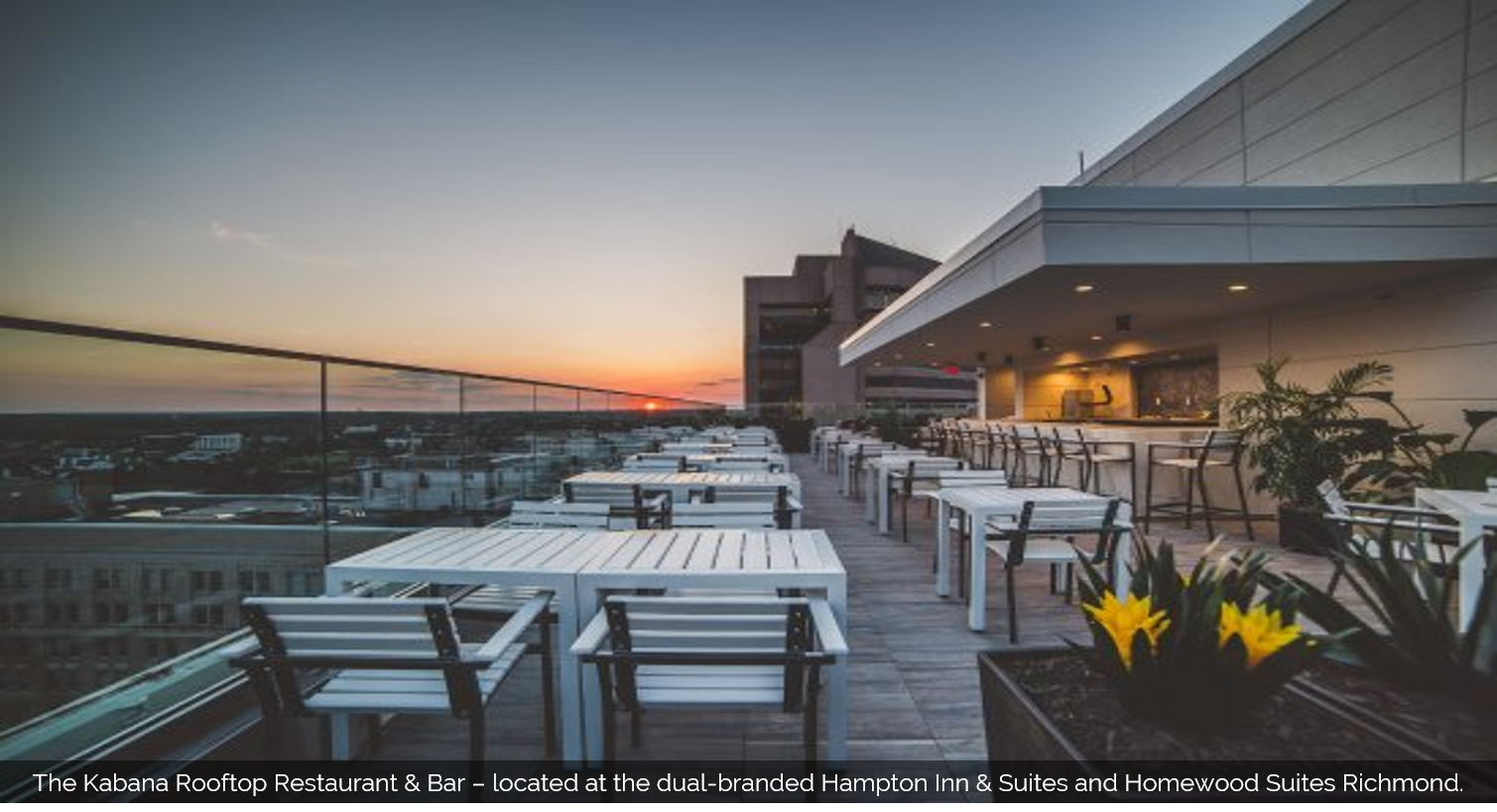 Richmond’s world-renowned Jefferson Hotel is one of only 51 hotels in the nation to earn a Forbes Five-Star, AAA Five-Diamond rating. The Jefferson recently underwent a three-year renovation project that refreshed the hotel’s communal areas and public spaces. The hotel’s room count was reduced by about 80 rooms, allowing for a 500-square-foot expansion for each of the remaining 180 rooms. The 410-room Marriott Richmond remains the largest hotel in Richmond (by number of rooms).
Below is a breakdown of Richmond area hotels by STR chain scale.
Economy and Upscale Hotels Account for More Than 50% of Rooms in Richmond 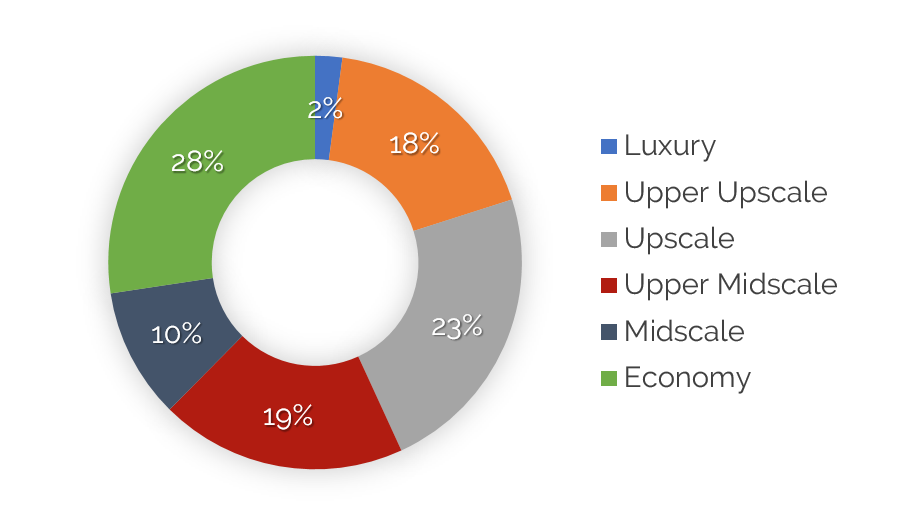 Overall, Richmond’s hotel market has recovered well and achieved growth since the last recession. The presence of federal and state government institutions in the city has helped stabilize the local economy and attract new businesses to the market. The cautious and calculated introduction of new hotels over the past few years has ensured the market is not over-supplied, and demand for room nights continues to expand, allowing for growth in average rate. The continued strength of the local business community and Richmond’s diverse economic base, including some of the nation’s largest companies, bodes well for future hotel development in the next few years.

[1] Figures are for 2015 or fiscal 2015-16. A visitor traveled at least 50 miles one-way to the region. Data from Richmond Region Tourism, U.S. Travel Association, Longwoods International and Virginia Tourism Corp.

Marcus Lee is a Director with the HVS Los Angeles office, working within both the Consulting and Valuation and Asset Management divisions. Marcus has evaluated numerous hotels across the western United States ranging from limited-service hotels to luxury resorts. Marcus formerly served as Senior Manager of Development Feasibility for Rosewood Hotel Group, supporting this ultra-luxury group’s development efforts across the Americas region. Marcus gained hands-on knowledge of luxury hotel operations at properties in the District of Columbia, as well as international markets including London and Singapore. Marcus’ background in hospitality includes management and guest-relations positions with premier luxury brands such The Ritz-Carlton Hotel Company, Four Seasons Hotels & Resorts, Mandarin Oriental, and Capella Hotels & Resorts. Marcus earned a BA in International Relations and History from Boston University and a Masters of Tourism and Hospitality Administration from The George Washington University. He is a state-certified general appraiser. Contact Marcus at +1 (310) 614-9945 or [email protected].